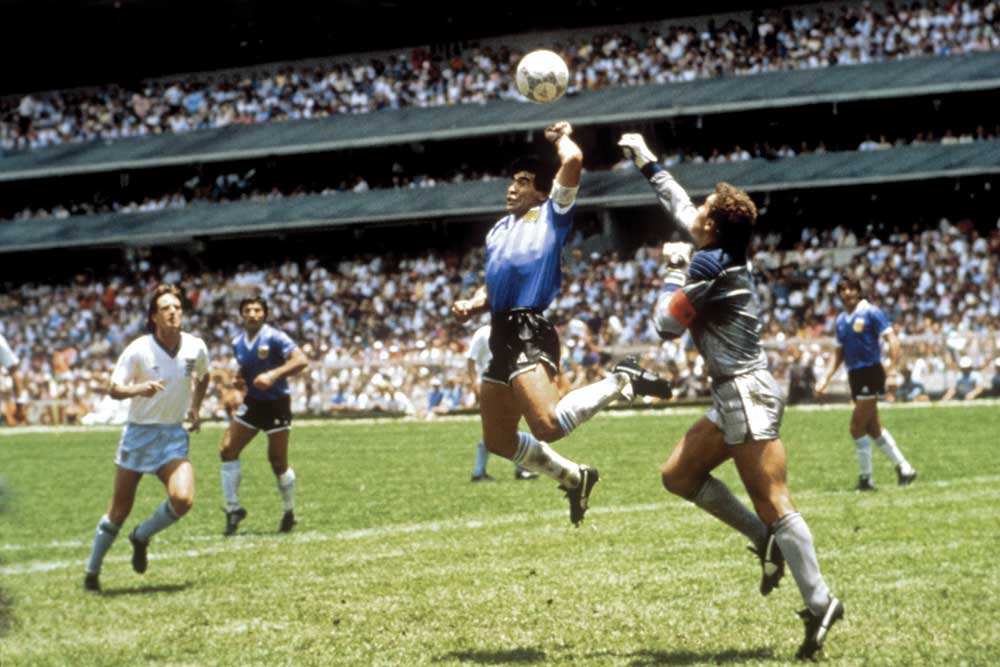 NEEDING TO WIN by a margin of at least four goals in its second round match against Peru to progress to the 1978 football World Cup final, the hosts Argentina wound up putting six with no reply into their opponents’ net. At the time, the journalist Brian Glanville had claimed that the Peruvians were ‘obviously bought’, a suspicion fuelled not least by the fact that Peru had won handsomely against Scotland and Iran, and drawn with The Netherlands, in their first round games. This theory has since seen several iterations, as Jonathan Wilson shows us in his compelling and comprehensive new book, Angels with Dirty Faces: The Footballing History of Argentina.

In 1986, for instance, as Wilson writes, an Argentinean investigative journalist Maria Laura Avignolo claimed, in an investigation by The Sunday Times, that the order to fix Peru came directly from Argentina’s repressive dictator General Jorge Videla. The deal, according to Avignolo’s account, involved the shipping of 35,000 tonnes of grain from Argentina to Peru, and the opening up of a $50 million credit line to be shared amongst various members of Peru’s military junta. In 2012, deposing before a judge in Buenos Aires, a former Peruvian senator, Genaro Ledesma, would confirm that the match was thrown, but for even more insidious reasons. The pact, in Ledesma’s telling, was a part of the infamous Operation Condor, which involved the secret sharing of information between different military dictatorships in South America with a view to eliminating left-wing opponents. According to Ledesma, Peru’s military leader Francisco Morales Bermúdez had sent 13 prisoners to Argentina to be tortured, and Videla agreed to accept them only on the condition that Argentina be allowed to progress to the final.

That football has a very particular political salience in Argentina is best exemplified by these stories around the 1978 World Cup, as apocryphal as some of them may be, including by what Wilson describes as the presence of a rather ‘odd detail’. Minutes before Argentina and Peru kicked off their match, the Peruvians were met in their dressing room by Videla, who was accompanied by the former US Secretary of State and football fan, Henry Kissinger. Although Kissinger apparently had little to say, the very presence of Videla, for many of Peru’s players, who were unlikely to have ever previously met a dictator of such ilk, is likely to have proved unnerving.

However, after Argentina ultimately defeated The Netherlands in the final, its manager, the suave César Luis Menotti, who was politically opposed to Videla, projected the win as a victory for what he would describe as ‘leftist football’, which involved the use of an almost-idealistic attacking strategy. For Menotti, his team’s style of play was an answer not only to the ‘anti-fútbol’ that Argentina had practiced since 1958, but also to the governing dispensation’s authoritarian politics. Unhappily for him, though, the junta equally saw Argentina’s victory as a tool to ignite nationalistic fervour. Videla’s regime, by most accounts, was responsible for the death of anywhere between 15,000 and 30,000 of its own citizens. As Wilson writes: ‘Whether the regime would have fallen sooner had Argentina not won the World Cup is difficult to say, but what is true is that the tournament was planned to provide a surge of nationalistic feeling on which the junta could capitalise and that it did so, ruthlessly, cynically and successfully.’

Angels with Dirty Faces is Wilson’s eighth book. He is most famous for his definitive 2008 guide, Inverting the Pyramid: The History of Football Tactics. Here, too, much like the formula that Wilson adopted in Inverting the Pyramid, he tells the story chronologically. As early as in 1840, he writes, the locals of Argentina were captivated by a game that involved some kind of football played by British soldiers on their docks. By the 1880s, the game had assumed a prominent place in British schools in the country, which saw football as a way of promoting a strong Christian ethic. Since these schools housed not only children from expatriate families, but also those from rich Argentinean households, the sport’s popularity grew rapidly.

The book’s title owes its roots to the five players who inspired Argentina to triumph in the 1957 South American championship: the forward line of Omar Orestes Corbatta, Humberto Maschio, Antonio Angelillo, Omar Sívori, and Osvaldo Cruz were described as ‘los ángeles con caras sucias’ (angels with dirty faces), a bow to the 1938 film starring James Cagney and Humphrey Bogart, ‘a recognition both of the impudence of their style and the carefree way in which they played’. As it would happen, though, the 1957 tournament also marked the end of an epoch. The following year, Argentina crashed out of the World Cup after a chastening defeat to Czechoslovakia, which would call into question the utopia of la neustra, the free-flowing attacking style of Argentinean football. A period disparagingly termed anti-fútbol—a style in which team work and diligence were valued over individual brilliance—would follow, until Menotti professed to revert Argentinean football to its once romantic ideals.

Wilson tells the story of the various styles of football practiced in Argentina, and their ebbs and flows, with acuity. But he’s even better at describing the talents of Argentina’s numerous great footballers, particularly the triumvirate of Alfredo di Stéfano, Diego Maradona and Lionel Messi, and the politics that subsumed, and continues to subsume in Messi’s case, their careers. He quotes the novelist Eduardo Sacheri with a view to ending the Messi versus Maradona comparisons. ‘It isn’t Messi’s fault,’ Sacheri had said, ‘that we Argentineans are incapable of ending our mourning for Diego.’ But the debate, as tiresome as it is, refuses to go away. There is a belief, perhaps on account of Messi’s comparatively more privileged upbringing, Wilson notes, that unlike Maradona, or his own contemporary Carlos Tevez, Messi lacks the attributes of a pibe. In the 1920s, the journalist Borocoto would describe, in Wilson’s words, the ‘pibe’ as something of a ‘liminal figure, the urchin who will make his way through life with a combination of charm and cunning’, as the kind of player who defines the ethos of the local Argentinean born footballer.

Also prominent in Angels with Dirty Faces is an erudite description of Argentina’s economy, its growth and decline, and its impact on the country’s football. In 2014, for instance, with the country in deep recession, its President Cristina Kirchner announced a new platform, ‘Fútbol para todos’—Football for all. Through it, Kirchner promised that all top-flight Argentinean league matches would be screened live on free television channels. “We will no longer hijack goals,” Kirchner announced, referencing the fact that viewers were able to see the goals for the first time only during a short highlights package on the weekend. “You kidnap the goals until Sunday, as you hijack the images and words. As they kidnapped 30,000 Argentineans. I want this to be no more a society of kidnapping. I want this to be a society that is freer every day.” As Wilson rightly observes, Kirchner’s rhetoric was astonishing in its impunity: ‘how could a television rights deal of the sort that is common across the world be compared to state-sanctioned torture and murder?’ But such is the place that football occupies in Argentina’s society; it may not be a sport that is immune from the economy’s vagaries, but it is a sport that has throughout modern Argentinean history always served the ends of politics. ‘While the book is primarily a history of football,’ Wilson writes, in his prologue, ‘so entwined are the political and socio- economic strands, so inextricably is football bound up with all public life, that this is also a book about Argentina.’ An ambitious claim to make, but one that Angels with Dirty Faces does live up to.