Man in the Mask

Narendra Modi is a man of few words, but he chooses them well to fabricate his vision of a Hindu society and ignore uncomfortable realities 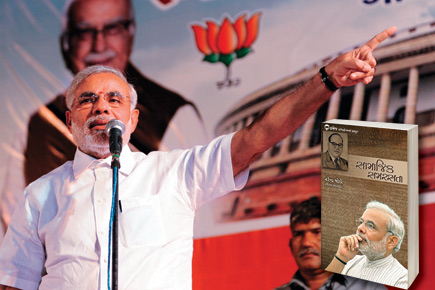 Narendra Modi is a man of few words, but he chooses them well to ignore uncomfortable realities.


Narendra Modi, more than any other contemporary political leader in India, understands the power of words. He is seen as a master of political rhetoric. And yet, for a man who is partial to poetry, he operates within a very limited range of political vocabulary in his election speeches. He has the capacity to infuse varieties of meanings into simple words, and is able to convey them through repeated use. He made a simple, everyday term
like behn (sister), which is almost always used as a sign of respect, into something ridiculous by his constant references to Soniabehn. He did something similar with James Michael Lyngdoh. Vibrant Gujarat, Nirmal Gujarat, Samras Gujarat, Gujarati asmita, Five Star NGOs, Sohrabbudin, English media and Italy are terms the people of Gujarat have come to understand, without his ever explaining their semantic structure. He uses them often, moving from one phrase to another, and the audience provides the semantic structure.

His books bear this out. He does not provide a discursive analysis. Instead, he prefers to use language in an instrumental way. His poems are instructive. The man who gave us the mask and who speaks to us from hoardings also warns us that it is not he. He tells us that what he gave us was, in fact, false, a tantalising chimera. In a poem Beyond the Image, he tells us that his soul is not in that image. ‘I am in that image of mine and also not in it, I am in that poster and yet not in it… Do not make a false attempt to search for me in my image or the poster. I am steady and unmoved anchored in my confidence, in my words, deeds and action.’

His prose is largely composed of biographical literature. Jyoti Punj, published in 2008, is an exercise in genealogy. Political and ideological genealogies are either a blend or a braid. They combine the political, the sacred, the national to the civilisational, and connect the ancestors to the present. They certify and create a continuity of thought that a person embodies. Nation leads to leader, politics to ideology, and the narrative becomes a hierarchy of discipleships. Each leader is an ensemble, a mnemonic of virtues, where a collectivity of discipline is captured by virtue of an individual.

This new book is a collection of his speeches on social issues. The term Samras is explained almost mathematically. Sambhav (equality) + Mamabhav (affection) = Samras (equability). With this equation, he creates a vision for a Hindu society. In his vision a struggle for justice, for dignity, leads to conflict—social and political. He would like a society that is monolithic in the sense that it is devoid of conflict and contestation. Even acts of fundamental rebellion—like Ambedkar’s call for annihilation of caste and his conversion to Buddhism—have to be understood through the prism of Hindu ideology. The act in Modi’s retelling becomes a patriotic one, as Ambedkar chose an Indic religion and not a Semitic one. By invoking the rashtra, Modi obfuscates the issue of caste oppression. He invokes Gandhi, not for his plea for equability of all religions and his struggle against a communal society and politics, but by speaking of Gandhi’s emphasis on village sanitation.

Modi uses a similar device in his political speeches. He does not even mention the communalisation of Gujarati society. This vision of society is not normative, not even utopian. It is a fabrication, an artefact. He needs this fabrication; that’s the source of his political power.

Tridip Suhrud is a social scientist from Ahmedabad