Mamata Banerjee’s career has been bound to the automobile in strange ways. No wonder, then, the reader of her memoirs soon starts to play a game of car-spotting in the narrative 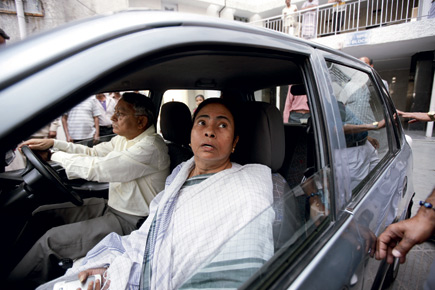 Mamata Banerjee’s career has been bound to the automobile in strange ways. No wonder, then, the reader of her memoirs soon starts to play a game of car-spotting in the narrative


South Asian history, in its professorial mannerisms and high-pitched tone, has always looked for the ‘important’, ‘grand’ narratives and panorama. The history of the everyday, of the irrelevant, of uselessness or the aleatory has never bothered or affected our historians, and that itself says something about our pretentiousness as a serious nation. It might be useful in our overwhelmingly politically correct photoshopped times to laugh at the remarkable stretch of coincidences that has governed the career of Mamata Banerjee. “I hope there is a bad ‘M’ and a good ‘M’,” said Ratan Tata, shortly after Gujarat became the new home for his Nano small car project, moving from Mamata Banerjee’s West Bengal to Narendra Modi’s Gujarat. The Ratan Tata quote is a good platform on which to sketch out the history of an irrelevant relationship between Mamata Banerjee and means of transport.

Mamata Banerjee’s career has been bound to the automobile in strange ways. My Unforgettable Memories, her memoir translated in English by Nandini Sengupta, begins with an anecdote about travelling in a car: ‘Akbar’s daughter Rose was sitting next to me in the car. She asked me, “Is the sun travelling with us too?” To make the child happy, I replied, “Yes …see how the sun is keeping our car company.”’ Mamata Banerjee’s electorate will remember her jumping on taxi bonnets and throwing herself on a car. There are stories of travelling in a Tata Sumo, Ambassador and a Santro in this memoir, and after a little while, the reader can play a game of car-spotting in the narrative.

‘The 1996 assault near Garden Reach was equally brutal,’ writes Mamata, ‘Bimanda used to have a blue Maruti back then… I was sitting next to him …the attack came midway to our destination. Goons climbed on top of the bonnet, pelted us with stones and boulders… Bimanda was trying to desperately reverse the car but it stalled. The boulders had damaged the clutch plate and we were stuck. …I kept telling him, “Let them do what they can, don’t reverse the car…” The goons by then were on the rampage but miraculously the car came back to life. Bimanda quickly reversed and pulled into a nearby police station.’ I can’t remember any politician’s memoir dwelling at such length on clutch plates and other automobile architecture. A few pages later, the automobile is invoked again: ‘All through 1994-95 I used to ride in Bappan’s Ambassador because I had to wear an orthopaedic belt… I received a phone call asking me to attend an important meeting with a senior party colleague. I told Bappan, “Send the car to your father, I will take a taxi and go for my meeting.”’ After telling us about how the change in plan saved her life, Didi returns to the ‘transport’ narrative governing her life: ‘After this incident, I told Bappa, “I won’t use your car anymore because I don’t want you or your family to be targeted because of me. I will manage my transport somehow.”’ In the very next page, she makes another of those transport-miracle connections: ‘It was very cold and foggy… The entire bonnet of the taxi was crushed and the windshield was blown to smithereens… It was yet another of those miraculous escapes.’

Here she recalls the ‘reign of terror’ in 1977: ‘The local goons even tried to push me under a running car but once again my friends pulled me away in the nick of time.’ And again: ‘I remember on 11 August when I had gone to Aamtala in Bishnupur, I noticed a police car following me. I immediately decided I would not lead them to my destination. …We parked our jeep and spent a long time in the party office. The police patrol stuck to us. Finally we decided to trick them.’ About her trip to Nandigram, she writes, ‘But just before entering Riyapara, once again we confronted a gang of CPM cadres who attacked our cars. By then, I was physically exhausted.’ Talking about the ‘stage’ of her 26-day fast, she again makes it a point to mention vehicles: ‘It was close to a busy road, the traffic creating both noise and vehicular pollution.’ And here is Didi on her trials: ‘I have toured the length and breadth of Bengal. All I had was a battered jeep at best and nothing at worst. I toured the distant villages of Jangalmahal on foot or on a party colleague’s motorbike.’ The Samajwadi Party might have the bicycle as its election symbol; the Trinamool Congress could have had a car or train as its symbol.

Ruchir Joshi, writing about one of Mamata’s padayatras in his book Poribartan: An Election Diary, mentions two interesting tropes. Anyone who has seen her walk will be aware of the unusually high speed at which she moves. So while this is hilarious, it is not unexpected: ‘A man listens intently on his cellphone and then shouts, “Ei, taarataari egoe, Didi speed baadhiye diyechhey! (Hey, get a move on, Didi has increased speed!)”’ A little later, he mentions the Trinamool slogan, and it comes in the same trope, though not before Joshi wickedly hints at the irony of the perspective he presents to us: ‘A row of shiny new Tata Nanos stare down, ferret-like, watching the passing flood of humans from their first-floor perch. “Ek, dui, teen, chaar, CPM pankchaar!”’ ‘Pankchaar’ is, of course, a tyre puncture. The metaphor fits perfectly with the larger narrative. Mamata Banerjee is only articulating a Bengali symptom. Here is Ruchir Joshi: ‘When the ice-cream man hears that I’m doing a series on the elections he switches on his sound-byte machine, pithy and articulate: “Whoever wins, the man who today has two wheels will not get to own four wheels. He may get another set of two wheels but he won’t get to four wheels. So what difference does it make?”’ In the epilogue to his book, Joshi imagines an opera about Bengal. He calls it the ‘Cobra of Power’. An excerpt: ‘A young woman leaps on the bonnet of the Ambassador and begins to dance in protest but the noise of her stamping gets lost in chants of “Jaiprakash! Jaiprakash!” Every now and then, throughout the play, this girl dancing on the Amby bonnet will pass through, the noise of the tandav (dance) getting louder and louder till, at the end, the palki (always empty after its first entry), is itself on a long ‘Rajdhani train’ and the noise becomes deafening.’

Mamata often puts bulldozers and wheelchairs in her poems. In a poem titled Awshohaye Naari (The Helpless Woman), she says, ‘Ghurey byarano aamar shawbhaab (To move around is my habit). In another poem, Unnoyawner awpobyakha, she writes, ‘Unnoyawner naamey bulldozer? (A bulldozer in the name of development?)’. It’s a word that comes up often in her writing—she uses it both as noun and verb. The automobile motif in her career, of course, culminates in the banishment of the Tata Nano factory from Bengal.

Didi’s love of trains and the railway ministry is too well known to need new documentation. One piece of trivia: as railway minister, she named a train Duronto Express, duronto being the Bangla word for speed; it also holds in it an element of naughtiness, being used most often for a naughty child. There’s water transport, too. So on a cold winter afternoon this year, Dipak Rudra, the ASI of Gosaba Police Station sent this message on his walkie-talkie to the Superintendent, South 24 Parganas: “Charlie Mike steamer chalachhen, Sir!” (“Charlie Mike is piloting the steamer, Sir!”) Charlie Mike, CM, Chief Minister, Mamata Banerjee. Standing beside the pilot Jatindranath Raftan, Didi’s hands on the steering wheel of the steamer running over the Bidyadhori river, the caption below the photograph in the next day’s Bengali newspaper read—‘The hand that steers the state is the hand that steers the wheel.’ Faking News, having spotted Didi’s attachment to machines used for transportation, announced that Vijay Mallya had handed over charge of his bankrupt Kingfisher Airlines to Mamata Banerjee, hoping that she would run it as well as she had managed the Indian Railways. To begin with, ‘Didi would get the red and white airplanes painted blue.’

Kabir Suman, Bengali songwriter, singer, activist, Leftist, then Mamata-admirer, now dissident Trinamool legislator, travelled with Mamata to Nandigram, recorded the reactions of the people, and put those sounds and words into a song, Mamata Jekhaney Jaaye. This is how the song begins: ‘Ki khabar gawnotawntro/ Chhilam Kolkata-ye/ Jai ni kawkhono aami/ Mamata jekhaney jaaye/ Ki khawbor gawnotawntro/ Ei gram Bangla-e’ (What news, O Democracy/ I was in Kolkata/ I’ve never been/ to where Mamata goes/ What news O Democracy/ in rural Bengal). Recorded sounds of cars and human voices and Mamata shouting ‘Shabdhaney jeyo’ (take care), enter the song, and Kabir Suman brings the car into it with ‘Aami achhi garitay/ Camera aamari haatey/ Mamata jekhaney jaaye’ (I am in the car/ The camera’s in my hand/ to where Mamata goes). It’s remarkable and one of the joys of the aleatory that his song about Mamata should have these references to automobiles and their sounds.

Didi’s memoir ends with these lines: ‘My friend, I will meet you on the road to the future. I am a pilgrim too.’ The state is now a car with a red light, it honks and waits.