Love in the Time of Swiping 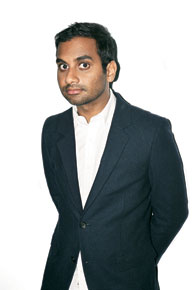 I have always loved the story of how my grandparents fell in love. Thatha was cycling down a street in Chennai, on his way to work, when he passed by Pattima’s house. She was on the balcony, brushing her beautiful long hair. They locked eyes and smiled shyly at each other. The rest—a marriage that lasted 52 years—is history.

Modern Romance , as Aziz Ansari tells you, is a different beast altogether. In the age of Tinder, my grandparents may have locked eyes for the first time on a screen. Would they have both swiped right? Would their banter have been promising enough to make a meeting worthwhile? Would Pattima have decided to go with the buff guy down the street because he had a better grasp of punctuation?

It might feel like every contemporary American comedian has beaten Ansari to the punch. By the point Modern Romance hit shelves this year, Mindy Kaling had already spent three years wondering Is Everyone Hanging Out Without Me? , Tina Fey had been a Bossypants for even longer than that, and though she was a little late to the party, Amy Poehler had said Yes Please in 2014, the same year Neil Patrick Harris instructed his fans to Choose Your Own Autobiography and Lena Dunham assured us all that she was Not That Kind of Girl. But Ansari—the Indian-American stand-up comedian best known for playing Tom Haverford in the late, great series Parks and Recreation—does something more interesting to justify his $3.5 million advance from Penguin. Intensely personal yet universal, his new book delivers a quirky, surprisingly smart but above all practical guide to Modern Romance.

In his introduction, Ansari pinpoints the book’s inspiration as being the moment when he realised his phone went from trusted communication device to the receptacle of a ‘tornado of panic and hurt and anger’. When a message inviting a girl he likes to a concert is ignored by the recipient (his phone helpfully marks it ‘read’), Ansari spends many, many torturous hours trying to make sense of the failure of his one-way text. ‘I’m so stupid!’ he writes. ‘I should have typed “Hey” with two y’s, not just one!’ Twenty-four hours of silence only produces more angst: ‘Did Tanya’s phone fall into a river/ trash compactor/volcano? Did Tanya fall into a river/trash compactor/volcano?? Oh no, Tanya has died, and I’m selfishly worried about our date.’ (Tanya, you’ll be glad to know, is alive and well, just preoccupied.)

We’ve all been there—as Ansari discovered when he incorporated the incident into a well-received stand-up routine. That realisation kicked off an exploration of the intersections of love and technology which spanned several months. Written in collaboration with NYU Sociology Professor Eric Klinenberg, Modern Romance is an irreverent, informative read for the smartphone generation with fascinating data, from a forum on Reddit to in-person interviews and focus groups in locations as diverse as Qatar and Argentina. Klinenberg delivers on the analysis of behavioural data and surveys, and experts like anthropologist Helen Fisher and Sheena Iyengar, author of The Art of Choosing, pitch in.

The result is an enjoyable hybrid of anthropological treatise (‘For women in [the 1960s], it seemed that marriage was the easiest way of acquiring the freedoms of adulthood’); irreverent geo-social commentary (‘If Tokyo is the capital of the “herbivore man”, then Buenos Aires must surely be the capital of the “rib eye-eating maniac”’); hard-core census data (‘France is the country with the highest rates of infidelity: 55 percent for men and 32 percent for women’); and the latest scientific advice on how to take a selfie most likely to appeal to the opposite sex (‘If you are a woman, take a high angle selfie, with cleavage, while underwater near some buried treasure. If you are a guy, take a shot of yourself holding a puppy while both of you are spelunking’).

Ansari concludes, ‘Technology hasn’t just changed how we find romance, it’s also put a new spin on the timeless challenges we face once we are in a relationship’: whether there’s someone better out there for you, how to keep passion alive, whether to have that affair or risk a sext, whether to snoop on your partner, and crucially, how to break up.

Modern Romance also succeeds as a variation on the celebrity memoir, with just enough about Ansari himself to whet your appetite. Tanya really missed out when she ignored that text.