Being both an insider and outsider at the Jaipur Literature Festival 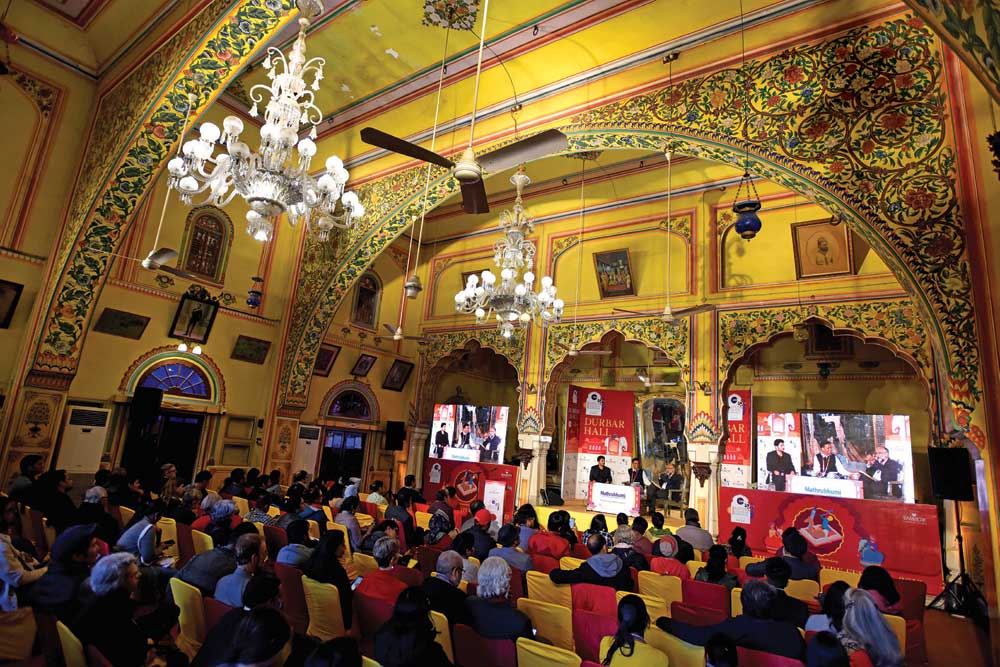 I WAS AS QUIETLY excited to attend the Jaipur Literature Festival this year as I was quietly relieved to leave on Sunday evening, bounding out of Diggi palace to reach the airport well in time. The airport is like the final stretch; you could spot Anita Nair heeding the last call for her flight to Bengaluru, Pulitzer Prize-winner Colson Whitehead headed upstairs with coffee, and any number of travellers looking ready to crumble after four days at the festival, which cut-to-cut is a five-day-six-night affair.

There is a festival hangover, as writer Bee Rowlatt puts it, and I had at least a day or two of post-JLF trauma flashes. The trepidation and anxiety around crowds, fear of bombing at a panel discussion, slight panic at having to speed-read my way through four-five books (that always reach later than planned), and the inevitable imposter syndrome that pops up when one is surrounded by talent. Luckily, it all pretty much culminated in surprisingly good sessions, lively conversations, general goodwill towards humankind… and then one long blaaaank moment of utter fatigue and feeling tapped out while on stage. That’s the worst, I think. There’s nowhere to hide. Brain starting to pound, smile starting to fade and systems just slowly shutting down. There are now books on how to get published in India, how to get ahead, and so on, but there really should be a guide on how to deal with boredom and panic whilst on stage. If you’re a speaker, I think it’s still fine, but as a moderator? I sometimes have that fake-smile rictus, that’s not-quite-but- maybe-somewhat related to what Sharmila Sen writes about in Not Quite Not White, though she’s describing the pain of smiling till your cheeks hurt while performing ‘whiteface’.

All very well, you might say, but then why agree to moderate in the first place? Especially when you’re not being paid, not even managing to flog your own books, nor being able to market yourself/your brand—something authors need to be on point with these days. (Yes, this is a thing. And authors might also want to think about hiring brand managers, judging by some audience questions.)

I admit, I don’t quite know why I agree, except that I get the invitation and polite request, and usually say ‘Yes, sure, why not?’ This year, that extended to helping moderate a press conference for Jeffrey Archer, moderating four live audience panels, and the ‘first digital’ panel for Twitter’s Powerof18 initiative. I realise if I’m not jobbing at the JLF, I wouldn’t know what to do. Would I even attend? The jury’s out, though the FOMO would probably get me, I reckon.

Now, the upside of the moderating gig is I do get to talk to a few talented, eclectic writers. Like AJ Finn, the bestselling author of The Woman in the Window. He was eloquent and engaging— responding to questions openly, flaunting his fairly sardonic wit and leaving the audience enthralled. This was one of my favourite conversations of the festival. Finn—the pseudonym used by Daniel Mallory—delighted us with the (slightly truncated) story of his journey as a debut writer, including submitting his manuscript anonymously to the publishing house he worked at, and the process of accepting what’s called an ‘exploding offer’ apparently (where one has to say ‘yes’ or ‘no’ immediately) to a $1-million payment for the movie rights!

It was also human (and powerful) of Finn to acknowledge his own battle and journey with depression, which helped inform the character of protagonist Anna Fox, the unlikely hero of the book and eponymous woman in the title, who suffers from acute agoraphobia but is also witness to what seems to be a crime.

My session with psychologist Shelja Sen and author Shabri Prasad Singh on their books Reclaim Your Life and Borderline, respectively, also felt meaningful, given the importance of demystifying mental health disorders and illnesses, and the need to talk more about them.

But the thing about the programming is if you’re doing one thing, you’re missing another—a condition peculiar to the JLF. You feel like there is too much to see, then you’re paralysed by indecision, torn between sessions you land up at one, only to run out of steam and collapse into a corner, revived by copious cups of coffee (the Blue Tokai stall this time was a winner) or kulhad chai on the front lawn.

SO WHO WERE the stars this year? Unlike 2017, actor Dominic West sadly did not make a guest appearance. I’m not sure if there was a similar cynosure this time. We had heard Neil Gaiman was planning to make it this year, but long before January rolled along learnt (quite deflatedly) he would be nowhere near the Pink City. Anna Burns, author of the fabulous Milkman which won the Booker Prize last year, also skipped the event, to our collective disappointment.

There was a packed house for the keynote address by Nobel Prize-winning scientist Venki Ramakrishnan, author of Gene Machine. Acid-attack survivor Reshma Qureshi was quietly courageous and inspiring. There were crowds of people lining up to get books signed by André Aciman (author of Call Me by Your Name); crowds gathered for Jeffrey Archer as well. Booker Prize-winner Ben Okri is now a JLF veteran and remains a favourite. Mary Beard, Yann Martel,Alexander McCall Smith and Reni Eddo- Lodge were also popular; Germaine Greer was a draw, despite many (moderator Bee Rowlatt included) disagreeing with various opinions. Manisha Koirala, unsurprisingly, was the Gulzar this year, with fans flocking to her.

The reactions to JLF are as varied as the audiences and participants— from international writers (yay, love it, even if it’s a bubble) to publishers (work is work is work) to the press and aspiring authors, to the folks moaning and groaning a year in advance. A lot of the grumbling has nothing to do with literature, but more to do with who’s been invited to which party, which party has food, which parties run out of alcohol and more of the same. Unlike years past, I didn’t hear as much grumbling this year about the Dry Day in the middle, but it’s hard to complain when you’re at Amer Fort listening to music and a dramatic reading by Ben Okri while being fed piping hot food.

It was lunch that dominated festival headlines this time, more specifically, a big tree falling at lunch, leaving a person badly injured. He got 12 stitches (but thankfully no concussion), and was discharged from hospital and sent home the same day. But really, also the ludicrousness of life is revealed when you hear that those sitting next to him at the site of the massive tree crash refused to move in all the chaos, because ‘Where would we eat?’

That’s the festival in a nutshell.

Is it possible to be a festival regular (‘festival furniture’ even) but not a festival insider? I don’t know. But yes, there are folks who love it, folks who love being seen at Diggi, and folks who love the parties and the scene as much as the literary festiveness of the fest. There are also friends (frenemies?) who want to compare how many sessions you’re doing versus how many they’re doing. Moderation of panels as a competitive sport? You’re probably winning this dubious race if you’ve got just the one or two panels, with other people moderating your conversation.

Then there are those who gratify your ego by remembering you from when they saw you, or how your book launched at the JLF some years ago. At times, these chaps also pinprick that ego because sometimes they’re the ones who notice when you don’t get invited. There are the well-wishers who come up to talk to you and then the penny drops and oops they meant someone else! But wait, let’s take a selfie as well, in case!

Best of all are schoolchildren, who are still there, like every year, walking up to folks along with their well-meaning teachers for messages of inspiration and ‘blessings’, with no idea of who they’re talking to.

The whole festival was cashless this time, perhaps prompted by the time someone tried to run off with the entire cash register at a book store/tent. I’m told they were caught later, having tried to hide the cash box under a ghaagra. There are also regular complaints of people trying to steal books.

Who knew people were still reading or trying to read at literary festivals? Most people seem to be here for selfies and the sun. Though there are those glorious moments when you can listen to the speakers and feel you can connect with them, which is when you remember why you like this festival. In fact, now that it’s over, I definitely think it’s worth it to attend: where else would we get to hear some of these incredible writers in person? And then there’s the shiny potential of discovery. My first book was pretty much commissioned at the JLF many years ago, and I see and hear from other aspiring writers in attendance. There’s also a business-to-business track for publishers running parallel to the JLF, with the Jaipur Bookmark series of conversations at the venue.

The JLF is doing something right, no doubt, because organisers announced a footfall of around 400,000 over the five days. The weekend didn’t break us this time and while there was a bit of a crush on Sunday, it wasn’t as overwhelming as it has been in recent years.

The festival insider-outsider Twitter account @JLfInsider gave a lot of people a lot of heartburn, and worse, as soon as they waded into MeToo conversations. I have no idea who runs the handle (or even if it remains crowdsourced, as they indicate) but it kept up that wave of critique and snark that festival regulars have grown to expect, with writers tweeting they checked the handle de rigueur post-session. MeToo accusations apart, what is interesting is how many people check the account— perhaps a cathartic release somewhere, given how polite and smiley we all have to be in public? After all, in the incestuous world of writers-publishers-reviewers-journalists, who apart from an anonymous account is really going to say anything contentious? As long as you’re not the one being roasted, it remains amusing. Freedom of speech is something we all seem to love until we’re in the crossfire. And let’s be honest, there is a particular kind of pseudo-intellectual who thrives in this environment. Oh wait, maybe that’s just me!