Irom Sharmila believes a book has power. She’s right, the story of her life does carry the power to torment our conscience. 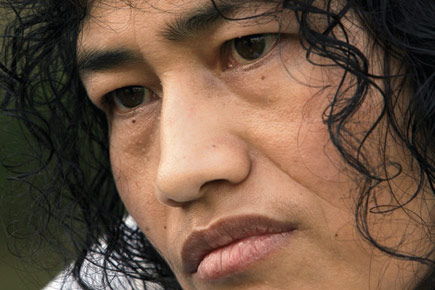 Irom Sharmila believes a book has power. She’s right, her story carries the power to torment our conscience


Irom Sharmila believes a book has power. She’s right, her story carries the power to torment our conscience

Images of an alleged ‘fake encounter’ in Manipur, images that make the journalistic obligation of ‘alleged’ less weighty that it is meant to be, have just about brought to Delhi the goings-on in Manipur. But fleeting moments do not convey the scale of the oppression that the paramilitary Assam Rifles inflicts to check separatism. Such news moments don’t tell you, for instance, that Manipur reported 37 such ‘alleged encounters’ between May and July alone.

Even if you are in favour of keeping intact the boundaries of a map by force, you would agree that the policy should not exacerbate secessionist violence. Most people of Manipur are alienated enough from the Indian state to feel their colonisation did not end in 1947; that their culture is violated and land exploited.

For those who express their discontent with violence, furthering the cat-and-mouse game between security forces and insurgents, for them as much for the state, Irom Sharmila Chanu and the Meira Paibis (a women’s movement in Manipur) are examples of non-violent means achieving much more than the gun ever can.

Sharmila’s fast-unto-death, in protest against the Armed Forces Special Powers Act, is nearly a decade old. When she was released from custody on Gandhi Jayanti in 2006, she immediately flew down to Delhi to pay homage at Rajghat. An ordinary woman from Imphal, she’s a hero in Manipur, her poems sung and circulated on CD, her village every autowallah ready to go to if you say you want to meet Sharmiladidi.

Every time Sharmila’s case for attempted suicide comes up for hearing, the judge offers her bail, but she refuses it. She is a prisoner of our conscience, fed a liquid diet through a tube. Once, Mehrotra writes, security guards started cooking in her room, tempting her with the smell of food. The court accepted her request that the cooking be done outside. How can anyone not be moved by an ordinary citizen like Sharmila turning her body into a weapon of peace? Her continuing fast is likened to the house arrest of Aung Sung Suu Kyi. Just as Suu Kyi’s defiance is a symbol of democratic opposition in Myanmar, Sharmila’s story lets us in on the history and politics of Manipur.

It helps that the author is neither an activist consumed by rhetoric nor a journalist mired in details. Sharmila in Delhi’s AIIMS was an inspiration, a friend, and Mehrotra felt the need to write only when Sharmila left for Imphal. When she told the ‘Iron Lady of Manipur’ this, Sharmila replied, “You must write a book. A book has a lot of power. If it is a good book, more and more people will read it…” The author has not let her friend down.