‘If you have a belief system, give up art’

Howard Jacobson on jealousy among great writers, his fear of obscurity, and why aspiring writers must rid themselves of ideology 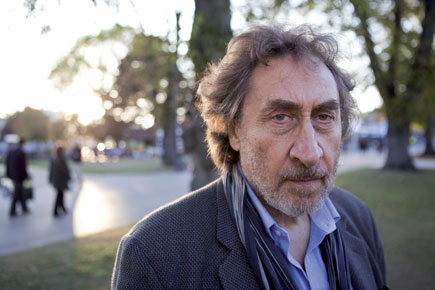 Howard Jacobson on jealousy among great writers, his fear of obscurity, and why aspiring writers must rid themselves of ideology


Howard Jacobson has a great face. He once met a lady after a reading in England who told him so, adding that there was a kind old Jew in her village who looked just like him. He recounts this incident in the same tone with which he identifies Israel as the greatest threat to Jewish humour—a kind of wry, affectionate concern. His Booker Prize-winning novel, The Finkler Question, won him admirers across the world, yet he is amazed by the vast turnout of young readers at the Jaipur Literature Festival earlier this year and seems genuinely surprised at being told by some that the book made them cry, adamant that such a thing would never happen in England, being now hollowed out of young readers. He resists the tag ‘comic writer’ and insists that humour is opposed not to seriousness, but to solemnity.

Q Which writers have influenced you most?

A They’re all English authors. [Charles] Dickens, I suppose, above all. And Dr [Samuel] Johnson, who wrote A Dictionary of the English Language and The Lives of the Poets, which are some of the greatest literary essays ever written. But he wrote a book—which people don’t think of as a novel; they think of it as a fable, but I think of it as a novel—Rasselas. Absolutely wonderful. It’s funny, but it’s funny in a moralist, wise, deeply ironical, somewhat sad way. And he’s writing it just about the same time as [Laurence] Sterne and [The Life and Opinions of ] Tristram Shandy. I don’t like Tristram Shandy. There’s a whole tradition of literature, of novel writing, that comes from him and ends up in magic realism—messing about, facetiousness, the endless jocosity of it: noises, and games with pagination. Then there’s this much more serious, and I think funnier, tradition of Dr Johnson, that goes from Jane Austen… Jane Austen! I don’t know whether she ever talks about Tristram Shandy, but she certainly talks about Dr Johnson, and you can see that she’s read him. And from Jane Austen comes George Elliot. I don’t know where Dickens fits in, in there. Dickens is another voice altogether. He probably would have read Tristram Shandy, though I don’t know if he was very interested, but he’s read [Tobias George] Smollett, and [Henry] Fielding.

Dr Johnson, Dickens, and [DH] Lawrence! Lawrence, who is nothing like me, and who doesn’t answer to what I want from a novel at all. He’s not funny or anything, but I just think Lawrence is marvellous. Maybe it’s the fact that he’s working class English—the outsider Englishman, never at home in England, always on the edge. His reviews and essays on literature are some of the best that have ever been written, and I think Women in Love was the great 20th century novel for me. Lawrence, and then [Joseph] Conrad, and it kind of stops there.

Some of the modern writers that I like are Milan Kundera, Mario Vargas Llosa—Aunt Julia and the Scriptwriter was one of the great comic novels of the 20th century. Philip Roth and Saul Bellow, I admire enormously.

I’ve just started to read Louis-Ferdinand Céline, a French anti-Semite. He’s fantastic—a horrible, horrible, vile human being. I like the challenge of books that are written by loathsome human beings but can still be marvellous books. Philip Roth acknowledges a debt to Céline, and Sabbath’s Theater, which I think is Philip Roth’s best novel, is very Céline-like.

Q Any young writers you are excited by?

A Oh, I’m too old for that. I’m not unexcited by them, but I’m writing all the time, and I’ve got to choose very carefully what I give my time to reading.

Alan Bennett said something fantastic once. Someone said to him, “Which other playwrights do you like?” And he goes, “Well, I don’t really go to the theatre.” And the person interviewing him goes, “But you’re always at the theatre, we’ve seen you at the first nights…” and he says, “Yes, I go, it’s impolite not to go to a first night. I have a drink and things, and when the play begins, I quietly creep out.” And they said, “Well, why do you do that?” And he said, “Because I’m very easily influenced. And I don’t want to be watching another play and thinking: ‘I should be doing that’.” It’s a beautifully tactful way of saying I don’t want one of two things: I don’t want to be at a play where everybody’s saying ‘Isn’t this wonderful?’ and I think it’s rubbish. I don’t want to be in that position. But also, at my age and experience, I don’t want to be watching a play by someone who’s just born that’s so brilliant that I would feel threatened by it.

I once heard [Norman] Mailer talk in London, and someone was saying, “Who of the great successful writers of now do you like?” And he laughed, as though, you know, ‘Do I want to hear of the great successful writers?’—it’s a jealous profession we have—and he said, “I’m at work on my old rusty Lincoln, trying to get underneath, and I’m trying to get my old rusty Lincoln to start again, and somebody goes whizzing by in a brand new Maserati. Why would I get out from under my car to look at that?”

Q Are you worried about obscurity?

I think I’ve made a little space for myself. Sometimes you worry that the space is too small, and sometimes, when you’ve just won the Booker Prize, you get overexcited and you think, ‘This is a grand space I’ve made!’ And then things calm down, and you are between a grand space and a little space.

Q What are you writing now?

A I’m writing a book now which is a dystopian novel, which is not what I normally do, though you could call Zoo Time a kind of dystopian novel—what happens when things get a tiny bit worse, culturally.

Publishers are not yet shooting themselves. In Zoo Time, a publisher shoots himself, and agents are in hiding. It’s a big wild comic novel about the end of it all, really. Zoo Time is now, but with the screws turned a little bit tighter. There’s a grand absurdity in Zoo Time, this preposterous hero who’s got no right to feel he should enjoy a grand reputation because he obviously writes rubbish. It’s perfectly clear he writes rubbish, which makes it all the more annoying when some reviewers think he’s meant to be me. He isn’t meant to be me at all, but I give him things to say which I think are worth saying, and making him a preposterous person means I can balance nicely the sense that these things are worth saying, and also you must be a bit mad to say them.

I think it’s very important that you hold both positions. You don’t have to make your mind up in a novel. That’s what’s wonderful about it. The novel is the terrain of scepticism and uncertainty. Nothing is sure, nothing is right, nothing is what it should be.

But the new one I’m writing now, which I’m halfway through, is a more dystopian novel, further in the future. It’s not the kind of thing I write at all, normally. It’s what they call ‘out of my comfort zone’ and I don’t always enjoy being out of my comfort zone. But I do want to push it, and see where I can take what I’m doing. I think I’ve exhausted a certain thing now. I think I’m too old now to be going back to the north of England, drawing from its demotic… my memories of it. I think I’ve drunk that well dry.

Q Will you continue to write about Jewishness?

A Well, it’s funny that one. At the heart of the novel I’m writing now is something Jewish, but it’s done in an unexpected way. It does not talk about Jewish life. It is not a novel about what Jews are like and how Jews talk and what Jews do. But deep under it is the buried J-word, yes.

I took a long time starting my first novel. The first novel I ever wrote was published, but I didn’t start writing it until my late thirties. And I was in a panic because I always wanted to be a novelist, desperately. I didn’t want to do anything else, and the years were ticking by, and I wasn’t writing that novel because I was trying to write novels that had already been written. I really wanted to write a late-Henry James novel, about English country life, about which I knew nothing. Partly, I think that I was ashamed—in a way that I am ashamed of being ashamed—of where I’d come from. Northern, working-class, Jewish—I thought there was no future in that. I thought, ‘I’m a literary fellow. I’m going to write literary novels. And if I’m going to write a really wild novel, I’ll write Crime and Punishment or The Brothers Karamazov’, but they’d been written too.

The old cliché about a novelist is you have to find your voice, but you do have to find your voice. And I didn’t find it until it just found me, when somehow or other, it was forced upon me that my voice was not late Henry James, or even early Henry James. It was a very English voice, behind which, interlaced with which, was the demotic of the Manchester street. My father was a very, very vivid man, he worked on the markets, was a taxi driver; our house was full of uneducated Jewish people coming and going, making Jewish jokes, using bits of Yiddish, and I thought: ‘Actually, that’s my voice, forget Henry James.’ That first novel had a bit of that [voice]. Then more and more I thought that’s my unique contribution to English literature. This is where I draw my strength, and the particular thing I know that other people don’t know.

And in the end that’s what you have to tap: what do you know that no one else knows? How do you speak in a way that nobody else speaks? What’s your experience that’s not like anybody else’s experience?

Without that, I would’ve written boring, solemn books.

Q How do you write? Where?

A I write on a computer, which I never thought I would do, but I do and I like it. We live in a two-storey penthouse in the middle of London, in SoHo, and I have the mezzanine, which is like a third floor, and I look out the big windows all over London. I see all the great monuments of London in the distance: I see Tate Modern, I see the Royal Opera House, I see Covent Garden, I see the tall buildings of the city, and it’s lovely because it gives me the world.

The thing that was always difficult for me in my early days as a writer was that I didn’t want to be out of the world. Now I love writing so much that I don’t care, but it is nice to see the world there. I do a working day. I get up early and sit at my computer. My wife reminds me it’s lunchtime or tea-time, and that’s that.

Q What do you tell young writers when they ask you how they should write?