Honey, I Shrunk My World

Bill Bryson’s short history of what he’d left behind on his ambitious travels, the home. 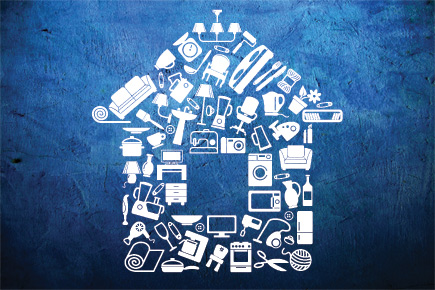 Bill Bryson’s short history of what he’d left behind on his ambitious travels, the home.


In his previous book, Notes From a Big Country, a series of bite-sized despatches from the US where he had recently relocated to, Bill Bryson was particularly fascinated by government-compiled statistics on household injuries suffered by Americans. Several thousands managed to hurt themselves while buttoning their shirts, a greater number sustained injuries while attempting tasks as banal as brushing their teeth. That moment seems to be the inspiration for At Home, an impish book that he calls the history of private life, or rather the household. He takes you from the hall to the attic, through the staircase, via the bedroom with a sneak peek into the pantry.

Burnt out by a series of tiring travelogues and ambitious books like The Short History of Nearly Everything, Bryson decides to stay at home, inside his Victorian Norfolk house, that was once a rectory. If you think Bryson was taking it easy with this one, you are oh-so-wrong. Usually in his travelogues, you can make out that Bryson never lets facts come in the way of a good story. But here, he can afford no such luxuries. He’s had to read up more than 500 books, ranging from The Archeology of Garbage to History of Childbirth: Fertility, Pregnancy and Birth in Early Modern Europe, and, as a result, the bibliography is longer than the longest chapter. You can imagine Bryson pottering around in a stranger’s home, trying to figure out with the enthusiasm and naughtiness of the young Macaulay Culkin in Home Alone why the showerhead always has to be circular, for instance.

An abiding interest in obscure trivia that has less than marginal social utility is of utmost importance if you are a paid-up member of the Bill Bryson cult. One of the eternal joys of reading Bryson is his charming digressions, which are generally of little consequence to the broader narrative. Two of his previous books have to do with language, words and etymology. Here, too, Bryson sprinkles delightfully nuggety etymological discoveries like choco chips in a rich ice-cream. While telling you about the origins of the hall in a house, he is reminded of the word ‘thrall’, which he informs us was the Old English word for slave and ‘which is why when we are enslaved by an emotion we are enthralled’.

Even though he pitches this as a history of the private life, Bryson restricts himself to medieval to 20th century England, with cursory attempts to look across the pond while ignoring the contributions of the rest of the world in shaping what we now call home. But then, this is not an academic work, or a definitive history. To quibble on that account would be missing the point.

This is easy history, Bryson style. He is at his cryptic best when describing the appallingly opulent lifestyle of 18th and 19th century English aristocrats. Servants constituted a class of humans whose existence was devoted to making certain that another class of humans would find everything they desired within arm’s reach or more or less the moment that desire occurred to them. The recipients of this attention became spoilt beyond imagination. ‘The tenth Duke of Marlborough emerged from the bathroom in a state of hapless bewilderment because his toothbrush was not foaming properly. It turned out that his valet had always put the toothpaste on the brush for him and the duke was unaware

that toothbrushes didn’t recharge automatically.’ Or sample this: ‘The sixth Baron Walsingham once single-handedly shot 1,070 grouse in a day, a toll that has not been bettered and we may reasonably hope never is… For all the sport in it Walsingham might just as well have fired straight into the cages and given himself more time for tea.’ As Bryson would say, buy the book now, right now. Take my car if you want.