Hanif and the Sea of Stories

Hanif Kureishi’s older stories are brilliant, funny and compelling. But the newer ones are a disappointment. 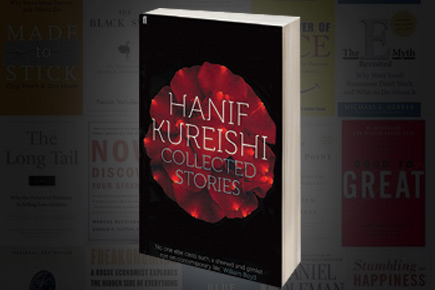 Hanif Kureishi’s older stories are brilliant, funny and compelling. But the newer ones are a disappointment.


Collected Stories is three books—Love in a Blue Time, Midnight All Day, The Body—and eight new stories by Hanif Kureishi. It spans more than a decade of his short fiction. The stories are racy, funny, shocking, deep and absolutely compelling.

Kureishi, who is from the Asian immigrant generation of the 1950s and 1960s in the UK, is at his best when he writes about never being able to fit in, and he does so with a great sense of humour, his characters always delightfully scarred. Love in a Blue Time has one of his more famous works, My Son the Fanatic. A taxi driver notices his teenage son has suddenly started keeping his room in order and become charitable. The boy has found religion, and with that a moral superiority that leads him to be contemptuous of his father. If My Son is an example of moral ambiguity, the problem of the protagonist in Tale of the Turd is slightly more immediate. He has gone to have dinner with the family of his girlfriend, and has to take a shit. Once done, the lump refuses to be flushed out and the man starts frantically and rather disgustingly to resolve the situation.

The new stories are a disappointment. There are touches of mastery. In The Dogs, he just needs two pages to create a moment of terror. But The Decline of the West, about a banker who has lost his job, is stereotypical and shallow. Hanif Kureishi’s best is not his latest, perhaps because the world that fed his imagination has changed or he is no longer part of it.