God is in the Details 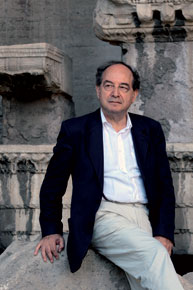 If you’re looking for Roberto Calasso the riveting storyteller, Ardor is not the book for you. Among other things, this is a complex, layered and highly idiosyncratic meditation on the Satapatha Brahmana, itself a complex, layered and highly idiosyncratic text that functions as a link between the Vedas and Upanishads. Satapatha Brahmana is normally a place where even angels (or perhaps I should say devas ) fear to tread, but Calasso takes it on with confidence and alacrity, using the insights he has gleaned of the Vedic world and the act of sacrifice in particular, to become a lens through which to view and comment on contemporary society.

This Brahmana has deeply philosophical conversations between the sage Yagnavalkya and various people, such as King Janaka and the women Gargi and Maitreyi, as well as instructions for that most elaborate of all sacrifices, the aswamedha. Calasso navigates both these distinct moments and discourses to suggest that the ancients of the Vedic period were far ahead of Western philosophy as well as modern science and medicine in their understanding of consciousness; ‘It is no surprise that they never founded—nor ever attempted to found— an empire. They preferred to think about the essence of sovereignty,’ he says. Vedic man truly was metaphysical man, and the quest for the metaphysical (rather than the strictly religious, spiritual or sacred) is a quest our secular world has disdained, to its great detriment.

Calasso also revels in the ideas of mystery that are located at the very heart of these ontological texts. He loves the idea that the gods have secrets that we cannot access, and like Gordon Wasson and many others, he suggests that some kind of access to these mysteries lay in soma, that magical, mystical (and very possibly hallucinogenic) plant that was ritually consumed by seers. Despite the heavy presence of the Satapatha Brahmana in Ardor, Calasso spends a great deal of time in the Vedic universe. Recalling the works of such Vedic scholars as Frits Staal, Louis Renou and Michael Witzel, he also creates resonances in his work with the seminal insights of scholars of world religions such as Mircea Eliade.

Let’s turn for a moment to the pivot around which the Vedic universe revolves: the idea of the sacrifice. We must not forget that the sacrifice (which often included the ritual killing of animals) was real and bloody, but it was transformed over centuries into a symbolic act, and then eventually into a metaphor. It is this metaphor that interests Calasso, where the ritual of the ancient sacrifice was meant to contain the violence that is such a necessary part of all life. For him, despite the violence that overlays our lives now, the secular world has lost this idea, just as it has lost touch with the larger concept of sacrality in general. While this is hardly a unique or startling lament, Calasso is able to infuse it with an urgency that a number of other cultural theorists seem unable or unwilling to do.

Ardor is literally bursting with ideas and arguments and the idea of sacrifice and its interpretation is just one that I have managed to follow through the twisting, turning, looping-back-on-itself labyrinth of Calasso’s writing in this volume. The other idea that interests me and which runs through the book is what it might be that lies at the heart of the religion experience. Trying to put his finger on what could be defined as the central religious emotion, Calasso comes up with ‘ardor’, which often becomes, in the hands of his deft translator, ‘rapture.’ I can only admire Richard Dixon’s ability to make sense of Calasso’s often rambling prose, studded with aphorisms and littered with phrases and ideas from other languages. If we consider Calasso an intellectual polymath, what then of the people who make him sensible (if not entirely comprehensible) in languages other than Italian, in which he writes?

Given that Ardor is not an easy read, why bother? Why read Calasso at all? Because he is a rare intellectual who remains a generalist, speaking with candour about how we might choose to understand ourselves in terms of the past rather than of the future. Unlike other contemporary thinkers who talk about culture and modernity, Calasso is not afraid of religion. Without being a theologian or an apologist or even a wishy-washy spiritualist, he reminds us that there are other ways to think about the religious impulse in a world where religion and fanaticism get equated, and demonstrates that religious ideas are still worthy of intellectual inquiry.