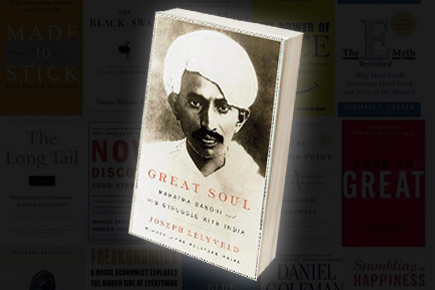 
The reception accorded to Joseph Lelyveld’s book made me think we live in a world drawn from Catch 22 or some other darkly absurd wartime epic comedy. It was as if the zeitgeist took a viciously inky black pen to the text and obscured all but a few words, leaving it looking like one of those military-censored letters one sees in archives. Then, that bare and gory armature of words (mostly like ‘cruel’, ‘racist’) got reviewed in The Wall Street Journal. That review, itself as sadly cut off from history as one of those soldiers supposedly found defending tiny deserted Pacific islands years after World War II ended, then became a template for one of the worst onslaughts of falsehood and propaganda in our time on the memory of a giant of a man more easily revered than understood, and increasingly, even more easily reviled than understood.

Great Soul is an eminent work, a tight, skilful narrative that makes the reader feel like the Mahatma’s shadow—and bump into sharp corners everywhere. Unlike a conventional great man biography, Great Soul actually takes us through a critique of the limits and choices, inner and outer, that Gandhi faced, beginning with his earliest days in South Africa. Like Ramachandra Guha’s India After Gandhi, it feels dramatic, real, and often evokes numerous ‘what-if’ and ‘if-only’ feelings about the country, especially in the treatment of the tense, occasionally respectful, often-confrontational relationship between Gandhi and Ambedkar, and to some extent between Gandhi and Jinnah.

But the overwhelming sensibility in the book does seem to be one of sympathetically characterising Gandhi’s failures (though some we cannot even say for sure are mistakes) in pursuing some of his major goals like Hindu-Muslim unity and ending untouchability. Lelyveld also brings the same scrutiny to bear on the less politically momentous aspects of his life, his relationships, for instance, with his entourage and with his friends, invoking carefully the burdens ordinary humans have to bear while living in the proximity of great men. And there are moments when Gandhi does appear mean, for ‘cruel’ is too strong a word. But the lasting image one has of Gandhi in this book is that of the desperately idealistic yet worldly man, walking barefoot in what must have been emerald-hued sunlight to meet indifferent Muslim Leaguers in Noakhali.

Since the book will perhaps not have been widely read in India by the time this review appears (though the hate headlines already have), I must emphasise the vast difference between the book as a whole and what it seems to be about. It is not a litany of Gandhi’s failures, far less his (non-existent) peccadilloes. It is as much a critique of a nation as a man. It is done fairly and respectfully. It does hint that Gandhi made some seemingly inopportune choices, but rarely does it waver from an unspoken belief in the integrity of his promise to himself and the solitude of it. It does not say anything about Gandhi that he has not already written about. It does not say Gandhi was a racist, but does, only fairly, criticise some of his early writings in South Africa as being that. Great Soul is, thus, not an exposé, but it has turned into something like that in a sensationalistic media climate devoid of context and sometimes content. Lelyveld rightly notes that among other things, Gandhi was a ‘scold’. Nothing could be more endearing and grandfatherly than that, and yet, in another context, it could come across as one more sign of his falseness. But a question does return about what Gandhi means to Indians today beyond official homage. The trajectory was set long ago, for the British knew even in the 1930s about the games truth and power play in a modern world, and left the man of truth with little else but a free country that could not follow him, a god with no constituency.