From Where Javed Akhtar Drew Mogambo 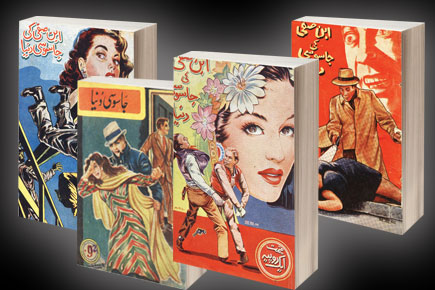 
Such books sell only if they are loaded with sex, the young Urdu writer was told when he began working in the thriller genre in the late 1940s. But Asrar Ahmed was having none of it. I’ll find another way out, he said (the pen name he had recently adopted—Ibne Safi—implied pure intentions), and so he did. In a career spanning three decades, he would publish over 240 bestselling novels and become a cult figure in his own lifetime.

Around half those books make up the hugely popular Jasoosi Dunya series, about the adventures of the imperturbable super-sleuth Colonel Faridi and his happy-go-lucky assistant, Captain Hameed. Now the publishing house Blaft—known for its Tamil pulp-fiction anthologies and for a refreshingly unconventional approach to book production—has brought out fine English translations of four of these novels. The titles—numbers 60 to 63 in the original series—are Poisoned Arrow, Smokewater, The Laughing Corpse and Doctor Dread. The covers, incorporating the original Allahabad-edition artwork, depict gun duels, skulls and crossbones, blonde women who look like they’ve popped out of a homely 1950s American sitcom, and an archer modelled on Errol Flynn’s Robin Hood. And the stories within are as fast-paced and exciting as you’d expect.

Each of these books deals with a separate mystery—murder by poisoned arrow, the kidnapping of a young heiress, and so on—but there’s a linking device in the form of two shadowy figures: an enigmatic, monkey-faced man named Finch and the notorious criminal Doctor Dread. As the stories unfold, we discover the connection between these two men and how their activities intersect with Faridi’s investigations. But first we must get to know our crime-fighting protagonists.

Faridi himself is a dauntingly resourceful man, the sort of no-nonsense detective who barges into people’s houses saying “I am a search warrant”, and means it. Put him in a sticky situation and he’s likely to get out by hurling a ‘stun grenade’ disguised as a pocket watch. (This device ‘raises the ambient temperature dramatically within seconds’, making the villains very uncomfortable indeed; but Faridi and Hameed escape its effect because of the special oil massages they’ve been having for the past few days in anticipation of this very moment!)

An efficient, straight-faced hero needs a quirky sidekick. Hameed, a permanent house-guest at Faridi’s large mansion, is dependable enough when the stakes are high, but lazy and comfort-loving are his default modes. “Your only problem is that you squander your intelligence in the pursuit of leisure,” Faridi tells him. The reader should have no such complaints; much of the appeal of these stories comes from Hameed’s infectiously madcap sense of humour, which often turns out to be part of a larger plan.

Ibne Safi worked at a time when a small-town writer could be deemed lucky if he had enough carbon paper to make an extra copy of a (handwritten) manuscript before consigning it to the postal system’s caprices—and yet, it wasn’t uncommon for him to write three or four novels in a month; a rich imagination allied with an easy, unselfconscious facility for writing can work wonders. Inevitably, some of the suspense has an assembly-line feel to it. And since the plots have to move rapidly, coincidences proliferate. There are twists and red herrings and much banter, some of it a little puerile. (Faridi: “May God, grant some sense to the girls.” Hameed: “Oh no, not to all of them! What then would happen to the likes of me?”)

But what make these books really engrossing are the milieu and characterisations—our growing familiarity with the people and their setting; the reassuring knowledge (important to the effect of any long-running series of this type) that there will be many more adventures to follow. Among the recurring characters are the overweight buffoon Qasim, a ‘lady inspector’ named Rekha, and, most amusingly, Hameed’s pet billy goat Bhagra Khan, whom he takes for drives in an air-conditioned Lincoln (and whom he lectures on ‘progress and morals’ each morning).

The world inhabited by these people (and animals) is an intriguing one. Though Ibne Safi was living in Allahabad when he began the series and in Karachi when he wrote these four books in the late 1950s, the setting is highly Westernised in many ways. The action moves between posh nightclubs, harbours, skating rinks and the hillock- and cave-dotted Fun Island; place names include the Arlecchino, the Niagara Hotel, Rexton Street and Gertrude Square; international thugs flit in and out of sight; a young (native) girl is described as wearing blue jeans. Despite the characters’ names and the occasional mention of an Arjun Pura or a Shabistan cafe, this isn’t a recognisable Indian or Pakistani city; it’s more like a self-contained fictional universe, created for the third-world reader seeking escapism. At the same time, there are a few traces of xenophobia, which is revealing when you consider India’s colonial history and recent independence. Foreign embassies are portrayed as shady places filled with dark secrets, White people don’t usually come off very well, a woman remarks at one point that “the East hasn’t yet fallen so morally low as the West”.

A couple of years ago, two other Ibne Safi novels—in the Detective Imran series—were published in English, but the translations were uninspired and joyless, rendered in much-too-literal prose. Pulp-fiction fans owe a debt, then, to the Urdu scholar Shamsur Rahman Faruqi, who did the Blaft translations. Faruqi was reluctant when first approached. “It’s difficult, because these books are so steeped in the local idiom and culture,” he said at the Delhi launch. But his work here is excellent. You get a sense of the spirit in which the originals were written (and the spirit in which they must have been received by zealous fans), but these books read like well-thought-out transcreations rather than laborious sentence-by-sentence renderings. Faruqi has fun in particular with Hameed’s tomfoolery as well as with Qasim’s unusual speech impediment (which leads him to say sentences like “She talks dribble, er, drivel” in times of stress). And though there are a few typos (“By now, Shaheena had by now [sic] lost both her temper and her restraint”), there’s nothing that can’t be easily amended in a later edition.

One can anticipate the condescending view—frequently directed at genre writing of all stripes—that these novels are meant for readers with unrefined tastes. There are many ways of responding to such simple-minded divisions between high and low art, but for the purposes of this review it’s worth pointing out how deeply Ibne Safi’s work has seeped into our popular culture, and the influence it has had on respected writers and artists. There’s a strong symbiotic relationship between these novels and the movies of the Subcontinent, for example; when you discover the reasons for Finch’s hatred of Doctor Death, it’s hard not to think of a certain tradition of revenge-seeking in Hindi cinema. Nor is it surprising to learn that screenwriter Javed Akhtar (part of the first generation of readers who grew up with Ibne Safi’s books) had his favourite Jasoosi Dunya adventures in mind when he created iconic movie villains like Mogambo in Mr India.

For the English-reading pulp fan who now has the opportunity to sink into these stories, it’s a thrill to consider that these four books represent the mere tip of a giant ice-lolly. Which is why I, for one, was distressed to learn that Faruqi doesn’t intend to do any further translations. If he can’t be persuaded to change his mind, I hope other translators with the necessary skill and enthusiasm step up to do justice to Ibne Safi’s very particular, very colourful world.