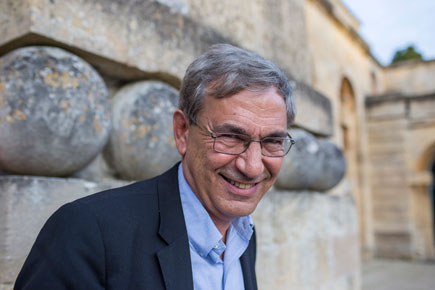 Orhan Pamuk’s new novel, A Strangeness in My Mind, is about a city, Istanbul, and a boy, Mevlut Karatas, growing together. It captures in astonishing detail the extraordinary sprawl and evolution of a metropolis over five decades, the ordinary lifespan of a man and his revelations of love in a mundane, one-bedroom apartment. It is about a place and a person, about public and private worlds, and how these two universes come together for Mevlut in an incandescent moment when he realises that he is sustained only by one thing in this city of ‘monstrous multitudes’: love. A Strangeness in My Mind is everything great fiction is about.

In Istanbul (2005), Pamuk’s memoir as well as paean to the city, he makes only a passing reference to boza, a dark yellow drink made of fermented wheat that has a low alcohol content and a high nostalgia content. He points out to his companion a boza glass used by Ataturk, not washed for 35 years, exhibited on the wall of a shop. In Pamuk’s last big book, The Museum of Innocence (2008), the boza seller is just a voice in the background. In A Strangeness in My Mind, Pamuk steps out of the balconies of the rich and their stories of idealised, indulgent romance, and follows in the footsteps of Mevlut, a boza vendor on the streets of Istanbul. Boza, guffaws Mevlut’s cousin Suleyman, is ‘just something someone invented so Muslims could drink alcohol; it’s booze in disguise’. For Mevlut, this ancient beverage of the Ottomans is inheritance in a cup. When he carries jugs of boza, strapped on the two ends of a pole slung across his back, through the poor, neglected, half- lit, cobblestone streets of Istanbul on winter evenings, calling “Booo-zaaaa… Gooood Booo-zaaaa”, he is a reminder ‘of centuries past’ to its residents. He soon gets reduced to a relic when new Istanbul no longer needs his old boza to get drunk, but only this unusual flaneur can provide the street view of Istanbul, only he can see the city without being seen.

Pamuk calls the book “the adventures and dreams of Mevlut”. It is gentle irony because what adventures can a poor boza seller who could not finish high school have? And yet, something happens, not quite an adventure, but a chance encounter at a wedding. A young Mevlut looks into the dark eyes of a girl and falls in love with her. He doesn’t know her name; wicked Suleyman tells him that she is Rayiha, the younger daughter of Crooked-Necked Abdurrahman. Mevlut writes letters to her, describing her eyes as ‘ensorcelled arrows’. When they run away after three years of his letter- writing, and he takes a first proper look at her face, he could not remember seeing her at the wedding. Did he not see the 17-year-old Rayiha that day, or was it her younger, prettier sister Samiha? Love moves from that moment of first doubt to rapturous discovery of each other. At the heart of Pamuk’s novel is this man-woman love: two people trying to make a living, enduring poverty and pregnancies, selling rice and ice cream, dealing with doubts and death. It is prosaic, banal, everyday love. It is watching television at the end of a long day, it is making quiet love in a musty room while the children sleep. In A Strangeness in My Mind, Pamuk celebrates this incredible normality of love.

In an interview, Pamuk had said: “And my understanding of love is not putting on a pedestal the first years or first romantic feelings, or the things that pop songs put on a pedestal. But I care about longevity, the struggle together, the friendship, sharing of the secrets, the partner being the centre of the world.”

Pamuk’s novel is not just about Mevlut. It is polyphonic, with first-person interventions and interjections by a host of characters. It is like a mini city talking in many voices, giving many versions of an event, reinforcing, contradicting each other. It is a novel where everyone has a say and is, therefore, validated; it is a novel with only heroes and no villains. These micro stories form the big narrative of Istanbul.

With its shifting contours and changing map, Istanbul has the most powerful presence in this book. From a clump of dusty hills in the 1950s, it slowly gets populated by poor workers coming from all parts of Turkey for a job, for ‘four walls and a ceiling’. This becomes a kaleidoscope of Istanbul’s changing landscape and society: flyers for circumcision ceremonies written in rhyming couplets, foreign adult movies and local comedians, shops and street food, mussel fries and McDonald’s and bottled boza. Eventually, the old houses disappear in a cloud of dust to make way for skyscrapers. It is a change that is both dazzling and dreadful.

Politics is the shifting backdrop to this novel and Mevlut’s life: Gorbachev and Bush kiss, protesters fill up Tiananmen Square and Twin Towers fall down on television. You see a sign near a station: ‘The founder of our republic Mustafa Kemal Ataturk drank coffee under the shade of this ancient plane tree… in 1922’. You hear of the word “Islamist” being spoken in Istanbul for the first time. Mevlut stands a little apart from politics, without aligning with the nationalists or the communists. When a rich customer asks Mevlut, “What will become of Ataturk, of secularism, if the Islamist parties take power? Will Turkey become like Iran”, he replies diplomatically, “All I do is sell boza… I don’t get involved in high politics.” It is about personal happiness that is largely untouched by political chaos and military coups. Pamuk finds much virtue in that stance, in Mevlut’s indomitable optimism and a rather unbiased eye in a world where some say “Kurds and Alavis have to be driven out” and some believe “only another coup could clean this place up”.

A Strangeness in My Mind is also the story of Istanbul’s women: how they negotiate with the world in many ways and find a space of their own—in slow increments, across generations—and how they sometimes fail abjectly in that. Pamuk says it mainly through the three sisters Vediha, Rayiha and Samiha. Pamuk’s woman walks out of the house, she sneaks away for a drive in the city, she wears jeans and the headscarves lose, she demands an abortion, she laughs at suitors, she wants a job. Pamuk also has a woman singer make a political statement, “I could write about all the men I have known and then I would also end up on trial for insulting Turkishness”, a sly reference to the sedition charges that were once made against him.

A Strangeness in My Mind is a carefully crafted book, right from the cover. The cover image is the handiwork of Pamuk: the removable paper jacket has a young, big-eyed boza vendor and the hardcover is the sketch of a city filled with skyscrapers, with an individual atop a dome. Each chapter has two headings: what the world sees and what the individual screams.

There is great restraint in both plot and style. Without emotional highs and lows, without a revolution or a grand passion to buttress it, A Strangeness in My Mind keeps an even tone. It has the steady pace of a boza seller on the streets of Istanbul. If you look closely, you will see his delight and distress. As Pamuk says at the beginning of the book, there are ‘no exaggerations’, no high-pitched love, no grand gestures. Instead, at about 600 pages, it is a long, immersive read, a lingering stroll through Istanbul’s history and geography. This is a different Pamuk. It is also Pamuk at the height of his powers. For, he not only puts an ordinary man at the centre of his story, but also makes his ordinariness unbelievably captivating and heroic.

(Charmy Harikrishnan is a Kerala-based journalist)


A Strangeness in My MindbooksfictionmetropolisOrhan Pamuk