Why hosting the Commonwealth Games does not imply disrespect for Indians who fought British imperialism. An extract 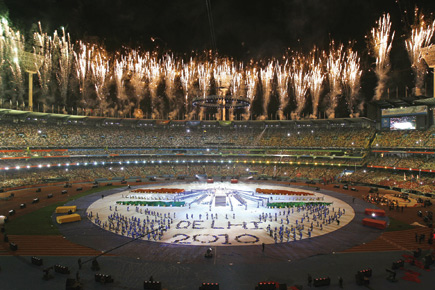 Why hosting the Commonwealth Games does not imply disrespect for Indians who fought British imperialism. An extract


If one asks a well-informed Indian what is the content of the phrase [Head of Commonwealth], he is likely to answer: ‘It means Nehru. The trusted leader says it is good, and therefore the people accept it.’ — H Duncan Hall, December 1953

Sixty-one years after the khaki-clad troops of the Somerset Light Infantry marched out from under the magnificent shadows of the Gateway of India, setting sail on a one-way ticket home, India is hosting the Commonwealth Games. The Raj is long gone, yet India has made it a point of honour to bring home, and be party to, a sporting festival that is central to what Amitava Ghosh has called ‘that particular memorialisation of Empire that passes under the rubric of ‘the Commonwealth’’. Why do we have to do it? Why has the Commonwealth connection endured for India? This, after all, is the country whose freedom struggle was seen as the torchbearer of anticolonial struggles worldwide and whose independence very quickly led to the crumbling of the entire British Empire. Symbols are the very heartbeat of politics and the Commonwealth is an evocative symbol of the past. It is, therefore, important to explore why India is now a proud host of the Commonwealth Games…

India could have opted out of the Commonwealth but it chose to join, albeit on its own terms, as a republic, free from even a notional allegiance to the Queen. This was a development that overturned the old balance of power and one that had to be forced down the throats of the older White dominions. At one level, Nehru’s Commonwealth gambit reflected his larger ideological understanding of history. At another level, it was an audacious cold-blooded manoeuvre, worthy of a Bismarck in its intent and implementation. As Nehru put it, the Commonwealth ‘has given us certain advantages [and no] liabilities in return’.

Nehru only saw the Commonwealth as a practical forum for propagating the new Indian Republic on the world stage. He manipulated it to project Indian leadership of the emerging Third World—a move that was to foreshadow his later efforts with the Non-Aligned movement. Over and over again—on the Suez crisis, on Korea, on Vietnam and on China—Nehru used the Commonwealth forum to provide the rapier thrust to his independent take on the emerging power praxis of the Cold War, much to the indignation of the Americans and the British. Within the context of the Commonwealth, this policy was so successful that by 1974, one of its most critical historians could declare unequivocally: ‘The key position [in the Commonwealth]… was held by India. Its vast size and population and the highly articulate character of its leaders had given India special stature… Nehru’s policy of ‘non-alignment’ was regarded as distinctive; when he spoke, men listened.’

That non-alignment was ultimately doomed to failure is another matter. Within an organisation that was created primarily to propagate the illusion of British pre-eminence in world affairs even after the end of its Empire, the success of India’s subversive politics was a remarkable achievement.

A ‘MOST IMPLACABLE ENEMY’

By the early 1930s, the white settler dominions of Australia, Canada, South Africa and New Zealand had all become autonomous and Britain formed the modern Commonwealth as a means of keeping them and the other dependent territories within its ambit. The Commonwealth began essentially as an imperial association… Britain’s imperial reach was at its zenith and the nomenclature and the aims of what was known as the British Empire and Commonwealth of Nations were unambiguous. For the most ardent of British imperialists, the intellectual foundations of any such federation were simply built on furthering the ‘expansion of England’. People like Goldwin Smith, on the other hand, understood it in terms of a ‘moral federation of the whole English-speaking race throughout the world’. Whatever its predilection—political or cultural—it was rooted in colonial reality and Britain’s self-image. So much so that one contemporary account in 1927 admiringly declared that the British Commonwealth of Nations ‘appears to be a vaster and more powerful Empire than that of ancient Rome’.

Such were the aims of the early Commonwealth. It is little wonder, then, that the Congress and Nehru were politically opposed to any such association during the halcyon days of the freedom struggle. Nehru, after all, was the man that Winston Churchill famously described in 1937 as the ‘most implacable of the enemies of the British connection with India’. Just a decade later, the same Nehru was to shepherd India into the Commonwealth; and the story of the turnaround in India’s second-most towering personality of the time is fascinating…

It was Nehru who rejected dominion status as a goal and advocated complete independence for India. In 1929, two years before the creation of the modern Commonwealth, emphatically declaring that ‘India is a nation on the march’, Nehru delivered his most uncompromising anti-imperialistic speech yet at the Lahore session of the Congress. By the late 1930s, Nehru’s ‘alienation from the Raj seemed to have reached its highest pitch’. Writing to a friend, he recalled his father’s description of the British government as ‘the greatest terrorist organisation’ and reiterated his assertion that real cooperation with the British was unthinkable for him till their rule ended. This was why Lord Irwin’s private secretary, Emerson, for instance, said in 1937 that Nehru—‘intractable, uncompromising’—was ‘more dangerous than Gandhi ever was’.

Nehru may have been implacable in his opposition to foreign rule but his upbringing at Harrow and Cambridge had also given him a great deal of Englishness. Writing his autobiography in a British prison, he wrote frankly: ‘Anger and resentment have often filled my mind at various happenings and yet as I sit here and look deep into my mind and heart, I do not find any anger against England or the English people … They are as much victims of circumstances as we are.’’…

For Nehru, opposition to the British was an intellectual and ideological project, not a racial or personal one. As he wrote in 1933: ‘This is not a conflict between India and England, much less it is one between the Indian people and the British people. The conflict is with a certain system called imperialism, which the British Government represents today in India and elsewhere … If England changed her form and method of government and dropped all taint of imperialism from it, there would little difficulty in the two countries cooperating for a common purpose.’

This is a line of thinking that translated into practical politics as independence approached. As prime minister, Nehru accepted dominion status as part of Mountbatten’s transfer of power package in 1947 and also agreed to join the Commonwealth, although only on his own terms. According to BR Nanda, the decision to remain in the Commonwealth brought with it certain in-built advantages in the transition period: it softened the Tory Opposition in the British Parliament; it seemed a useful link with Pakistan even after the transfer of power; it could help retain the loyalty of British officers who had chosen to serve independent India in the defence services, and it could help to disarm the suspicions of the rulers of princely states and thus facilitate their integration into the Indian Union…

The decision to join the Commonwealth was part of a deeper internationalist vein in Indian nationalist thinking. India’s foreign policy, with Nehru at its head, was built on a certain kind of internationalism that sought to do away with old-style power politics… It is important to note also that this stemmed from the wellsprings of Gandhian thought… As he put it, ‘India’s greatest glory will consist not in regarding Englishmen as her implacable enemies fit only to be turned out of India at the first available opportunity, but in turning them into friends and partners in a new commonwealth of nations.’

Independent India, battling as it was with the misery of Partition and the birth pangs of freedom, wanted a voice in the world, an end to isolationism and a steadying influence in global affairs. No wonder then that in late 1947 and 1948 there was a ‘… gradual and discernible trend in Indian opinion away from isolationism and towards the maintenance of friendly associations which would not commit India to explicit policies but would enhance her influence in world affairs…’

As already mentioned, the modern Commonwealth was defined by the Statute of Westminster of 1931, with three defining characteristics: equality of status, freedom of association and common allegiance to the British crown. The Crown link was critical to the self-image of the old Commonwealth but India presented a serious constitutional problem. While the older dominions were largely British and European in outlook, India was an ancient civilisation proud of its own history. It was one thing to accept dominion status as a temporary measure to break the deadlock over transfer of power, another to do it permanently. Complete independence, with all its symbols, had been a non-negotiable tenet of Indian nationalism for nearly two decades. In January 1947, therefore, the Congress passed a resolution that India would be a sovereign, independent republic.

In the eyes of the Congress, republican status was the keystone, the only thing that would clear ‘beyond all question or manner of doubt that India was a wholly independent nation’. This was totally at odds with the rules of Commonwealth membership, which had never been open to a republic and required allegiance to the Crown.

India pushed for a change in the status quo and the Congress’ Jaipur Resolution of 18 December 1948 spoke of a new vision of the Commonwealth: In view of the attainment of complete independence and the establishment of a Republic of India which will symbolise that independence, and give to India a status among the nations of the world that is her rightful due, her present association with the United Kingdom and the Commonwealth of Nations will have to change. India, however, desires to maintain all such links with other countries as do not come in the way of her freedom of action and independence, and the Congress would welcome her free association with independent nations of the Commonwealth for their common welfare and the promotion of world peace.

This was a big challenge for the Commonwealth because when the Irish Republicans had suggested the same thing, they had been refused. The Indian demand could only be met with a change in the criteria for Commonwealth membership and a compromise on the idea of the Crown as head of state… The Commonwealth’s prime ministers met in April 1949 with an Indian fait accompli to discuss. In the end, they had no option.

As the first big country to be decolonised, India was central to the sustenance of the Commonwealth. It would set a pattern for the rest of the colonies and if it left, the Commonwealth itself would be doomed as a relic of the past. In the end, the prime ministers decided not to change the entry rules in general, but to make an exception for India. India would only have to acknowledge the Crown as a symbol of the Commonwealth federation, but this would have no bearing on Indian law, as it did in the other member countries. India would have no allegiance to the Crown and this was a major departure.

Nalin Mehta
Nalin Mehta is a political scientist and journalist