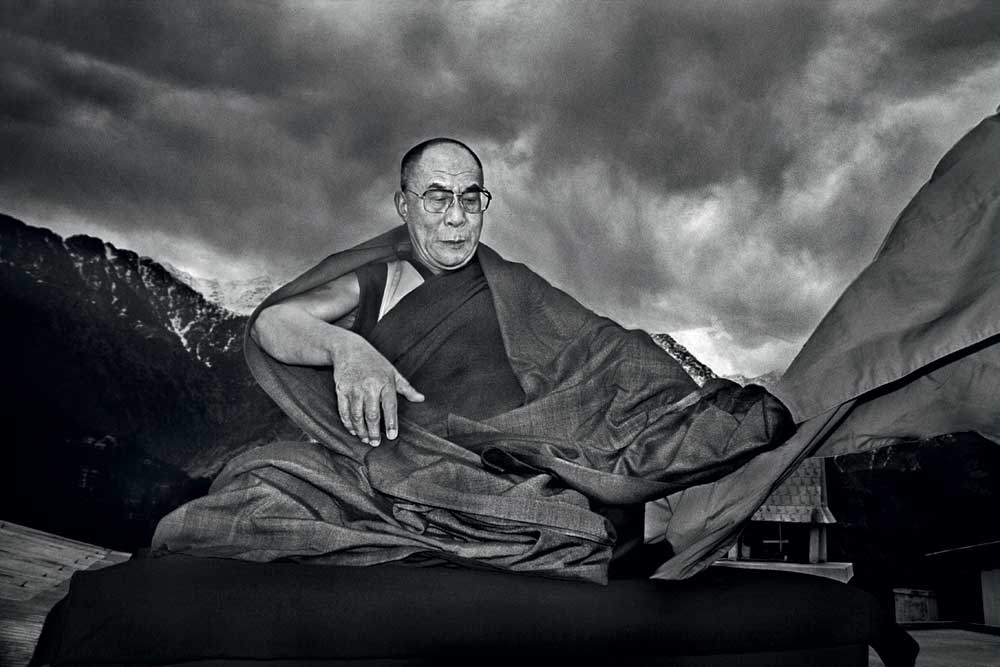 HOW CAN ONE individual be utterly human and completely divine? Raghu Rai’s new coffee table book A God in Exile: The Fourteenth Dalai Lama (Roli; 192 pages; Rs 2,995) shows us how these two seemingly contradictory aspects can coexist in a single person. Padma Shri recipient Raghu Rai has photographed the Dalai Lama over four decades. In his black-and-white frames, we see His Holiness as a man of mischief with a twinkle in his eye, a monk who has the touch of the blessed, and a leader who has his people in thrall.

In one of the rare photographs of His Holiness without his spectacles, he sits cross-legged on a capacious cushioned chair. His eyes are gently closed, his thumbs touch each the other in his lap. He seems aware but unperturbed by the photographer’s presence. It is an image not of a muni lost in a trance, but of a saint slowly slipping into concentration. Captured in a deeply private moment, it marks the transition from one plane to another, from a here to a there, from a man in his monastery to a man becoming a mountain.

In the chapter ‘Becoming the Himalayas’, Rai writes how many years ago he’d gone to Dharamshala, Himachal Pradesh, with a particular image in mind. It is in Dharamshala—the Dalai Lama’s residence and the headquarters of the Central Tibetan Administration—that the sway of the Dalai Lama can be felt most keenly. It is here that Tibetan exiles sought refuge when His Holiness was forced out of his country with his close followers by the Chinese government. Rai wanted the Dalai Lama to be profiled against the incredible Dhauladhar Range. He obliged, and Rai found a spot on the roof of the building (accessible only by a rickety ladder) from where he could shoot His Holiness foregrounded against the peaks. The majesty of the photo arises not only from the contrast between man and nature, but how his billowing shawl rises and crests like a mountain itself. In a series of photos in ‘Becoming the Himalayas’, the deep bond between the hill town and the holy man rises forth. He is Dharamshala, Dharamshala is him.

The introduction by Jane Perkins chronicles the Dalai Lama’s background and his journey to India. It is a story of a how a toddler, not yet two, was identified by the Great Thirteenth who left clues about his successor at the time of his death. For the first few years in Lhasa, the Dalai Lama stayed at the summer palace Norbulingka. In 1940, as a five-year-old he was moved to the Potala Palace, to be enthroned as the spiritual leader of Tibet. His days were spent in general education, debating, dialectics, penmanship, philosophical and scriptural studies.

The culmination of his religious education came in 1958, when relays of scholar-monks examined him for his doctorate degree. But by March 1959, Beijing’s occupation forces had laid siege to Lhasa. The Dalai Lama’s beloved Norbunlingka was reduced to rubble by Chinese soldiers, the three-day battle left an estimated 12,000 Tibetans dead. On March 31st, 1959, the Dalai Lama of Tibet crossed into India. Rai writes that the Dalai Lama often says, “My religion is the Nalanda tradition. So India is my guru and I am its chela—a student.” It is in India where he has made a home, and India is lucky for that. For Tibetans across the world, he is the Yeshe Norbu (the Precious Jewel).

Rai’s portraits are a tribute to the Dalai Lama’s supremacy over the Tibetan people. In a 1975 photo, Rai frames the resolute faith of lamas soaked in rain. They sit with their hands folded in prayer, with a shawl wrapped around their bodies, which provides cover but not shelter against the pelting rain. There isn’t a smile on a face, all you can see is sufferance and tolerance in the name of devotion. The elements are ruthless, but the stoicism of the monks is absolute as they listen to His Holiness’s Kalachakra teachings.

In another testament to the reverence in which the Dalai Lama is held, a young woman is photographed from the back kneeling in front of him. He cups her cheeks and looks into her face. She is held by two men on either side as she is beside herself with emotion. In the next frame, you see her face as she swoons back in the arms of a concerned woman police officer. The young woman’s face is of a disciple who has had an ‘epiphany’ in the true sense; she is the gentile to whom the manifestation of god has been revealed.

Despite the devotion that he commands, the Dalai Lama has a playful side, which he is not afraid to show and which Rai is privy to. His Holiness peeps through a curtain, with his cat in hand. He chuckles while watching the Mahabharata on television. He shares a hearty laugh with Archbishop Desmond Tutu. He jokes with intellectual and researcher Kapila Vatsyayan. A fitting title to these photos would be The Divine Amongst Us.