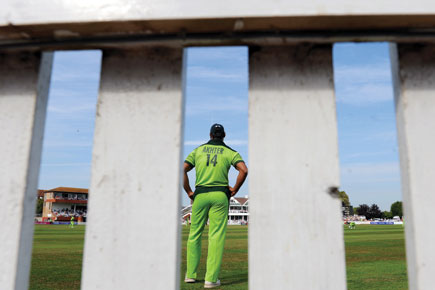 
Controversially Yours is testament to the fact that Shoaib Akhtar has few friends. Following the publication of this book, he will have fewer left standing by him. The book—an attempt to expose the ugly underbelly of Pakistan cricket by someone who has experienced the degeneration first-hand—takes on almost everyone of repute in the cricketing world.

Parts of the book where Shoaib describes how the Pakistan Cricket Board and senior cricketers ill-treat youngsters and destroy talent in the process are an eye-opener. Alongside, though, Shoaib paints a picture of himself as a saint who has always tried to swim against the tide—and this is difficult to digest. There is a desperate urge to assert that he was a match-winner and one of the best in the business, an insecurity that can be ascribed to a career that could have been far more illustrious. Forty-six Test matches in 18 years is hardly a statistic to be proud of, and a deep-seated frustration comes through on several occasions in the book. There is little doubt that Shoaib had talent—heaps of it—but it is perhaps better to leave it to others to say how good he was than continuously make the point in one’s own autobiography.

The good thing about the book is that it is a no-holds-barred account of the cricketer’s life. Shoaib has spoken his mind without thinking about how it could impact his future, and he deserves praise for not being politically correct. We will never know for sure whether this was done in an attempt to sell the book, but there is little doubt that what he has written about Wasim Akram, Shah Rukh Khan and Rahul Dravid will not go down well with the larger public in India and Pakistan.

That Shah Rukh, in cahoots with Lalit Modi, had made him false promises to get him to play in the IPL is a telling example of how the tournament was organised in its first year. ‘Shah Rukh and I talked about my not being happy with the money settled on me… He tried to persuade me saying… we have an extra million for you. Somehow, even though I wasn’t satisfied with the result of the auction, Shah Rukh and Modi got me to agree… I should have never listened to Lalit Modi and Shah Rukh.’ One wonders how Shoaib could continue to play for Kolkata Knight Riders despite the bitterness, and even hug Shah Rukh after winning the Man of the Match award against Delhi Daredevils at Eden Gardens. Was it an act of hypocrisy or is this the way a true professional should conduct himself?

His comments about Sachin and Dravid are even more startling. ‘I think players like Sachin Tendulkar and Rahul Dravid weren’t exactly match winners to start with, nor did they know the art of finishing the game.’ He drives the point home when he writes, ‘I have yet to see any Indian batsman except Virender Sehwag playing aggressively against me.’ And again, with, ‘I bowled [Sachin] a particularly fast ball which he, to my amazement didn’t even touch. He walked away! That was the first time I saw him walk away from me—that, too, on the slow track at Faislabad. It got my hunting instincts up. In the next match, I hit him on the head, and he could not score after that.’

Every Indian cricket fan will remember the torment Shoaib was subjected to by Sachin Tendulkar at Centurion in the 2003 World Cup. After Sachin’s 98 off 78 balls, which involved smashing Shoaib all over the park, it was Dravid’s unbeaten half century that carried India across the finishing line. Shoaib is the first to ever suggest that Sachin was scared to play fast bowling. That he had actually walked away while facing him is truly unbelievable. It will be interesting to see if Sachin chooses to react to such provocation.

The most interesting section of the book is the one on ball-tampering. According to Shoaib, everyone, literally everyone, tampers with the ball. He acknowledges that he has done so on several occasions and even justifies the crime, saying that more often than not, batsman-friendly pitches in the Subcontinent prompted him to do so. Knowing that this might ruffle a few feathers, he goes on to suggest that ball-tampering should be legalised to counter the unfair advantage batsmen have in modern-day cricket.

Reading him on this subject, one wonders if Shoaib is actually a sore loser. He sees himself as a victim of the system, subjected to unfair treatment, and exploited by the privileged. And his solution: tamper with the ball in complete disregard of the law. Being the first to confess to the crime hardly makes him less guilty.

This, for me, is the most important aspect of the book. Parameters of ethics keep changing and it is difficult to accept, as the book claims, that Shoaib was always trying to do things in the right spirit. Ball-tampering, in whatever context, cannot be ethical and cannot ever be claimed to be ethical. No matter what advantage the batsman has, the bowler just can’t resort to tampering the ball to restore parity.

At the same time, it is plain funny to note that one Pakistani cricketer ‘actually switched the ball in the umpire’s pocket with one that reversed like crazy! Umpires usually keep the ball in their coat pocket and then hang their coat up for lunch. That was when the transfer occurred. After this incident they now leave their coats in a locked room.’ It is pertinent to ask if Shoaib ever spared a thought for the opposing team when this ball switch happened?

Shoaib’s, it is evident, is the perfect rags-to-riches story. Born into poverty, it is commendable how he always faced adversity head on. Sleeping on the streets of Lahore in order to get to play a trial match, pleading with the tangawala for a night’s refuge to nurture his ambition, and the deep self-belief that drove him to storm out of a job knowing fully well that it might end his career, Shoaib’s life has certainly been exciting.

In Controversially Yours, Shoaib has tried to do an Andre Agassi—be self-critical and controversial at the same time. But the autobiography lacks the sophistication and finesse of Open, Agassi’s much acclaimed autobiography. In the cricketer’s book, he is a saint who was constantly victimised, even while he tried to do his best for Pakistan cricket. He writes of himself as a perfect role model who was driven to exasperation on occasions and provoked into committing mistakes he did not want to commit. This includes smashing Asif with a bat in the team dressing room.

My first encounter with Shoaib was when he smashed Tendulkar’s stumps at Eden Gardens in 1999. I was in awe. Here was a man with extraordinary cricketing talent. He deserved the standing ovation we gave him. His book, however, doesn’t deserve a similar ovation and might go down in history as a bitter man’s rant against his more accomplished colleagues and counterparts.