Arvind Krishna Mehrotra’s translations of Kabir, with a generous dose of American slang, are awkward at times. But the remix experiment is worth the risk of failure 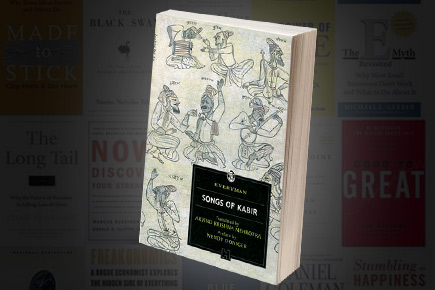 Arvind Krishna Mehrotra’s translations of Kabir, with a generous dose of American slang, are awkward at times. But the remix experiment is worth the risk of failure


Just as everyone now lays claim to Kabir, that 15th century enigma, it seems very much in his nature to be several things at the same time, and different things to different people. His songs are deeply devotional, intensely passionate, or canny and satirical, or queerly erotic, or angry and despairing, or cooly cerebral, linguistically playful, philosophical, obscure and even, by today’s standards, ‘experimental’. And it goes without saying that any translator might struggle to capture all these qualities in a single stroke; she would have to decide where her strengths and values lie, who her Kabir is. Even in the English tradition, where Kabir is already a century old, going back at least to influential versions done by Tagore and Ezra Pound, drawing from different source texts and editions over that time, the poems are a maze of possibilities. Arvind Krishna Mehrotra’s introduction to his new Songs of Kabir, released in India as a bilingual edition, makes no bones about this, and neither should we. The freedom Mehrotra asserts in his translations is only a freedom that is already there, claimed by the singer improvising for a given audience, by the ancient translator, and even, perhaps, by the manuscript copier. In the surprisingly apt words of Kumar Gandharva, talking about his translations of Kabir (with a rather different sense of the poet from Mehrotra’s) into music: “When I want to compose a bhajan… I try to understand the field of feeling. What does it want to say? What was this poet’s situation? If I had been the author, how would I have said it?”

So it happens that, yes, Mehrotra’s Kabir translations contain a small handful of references to things in our contemporary world, like rastas and Faber poets, and some bits of American slang, not exactly contemporary or streetwise to my ear, but more a kind of Americanese one associates with Hollywood movies of the 1950s. Is it ‘wrong’? Certainly not. Does it work, does it hold together? That is a trickier question, impossible to rule on, one where each reader will have to listen and judge for herself. I find the poems to be at times electric and, at other times, unsuccessfully awkward, even if, as Wendy Doniger convincingly argues in her preface to the book, the awkwardness may be the point. Mehrotra’s Kabir may not be the best Kabir available in English, but even when they stumble, his translations show us a Kabir that has never quite been shown before.

If we give a damn about our poetry, Arvind Krishna Mehrotra is a person deserving of a comprehensive Collected Poems and Translations if there ever was one; not least because most of his books are out of print and because we might begin to understand the—sometimes very radical—shifts his style has gone through. His engagement with Kabir goes back at least to the sequence ‘After Kabir’, in the collection Distance in Statute Miles (1982). Those poems, though marked explicitly as improvisations and not translations, prefigure the voice of his later versions in some ways, but are much more spare, elliptical and smooth-surfaced.

In his new book, the poems are not in a single unified contemporary/‘slangy’ idiom or register, but cut between formal and informal, fresh language and cliché, contemporary or American name-checking and faithfulness to the references of the original, often within a single poem. When this mash-
up works, spectacularly, it is usually because the colliding language has been incorporated into the sweep of the poem’s musical devices.

For instance, the line, ‘Vedic pundits and Faber poets’ works seamlessly because the two elements, ‘Vedic pundits’ and ‘Faber poets’, have the exact same metrical signature (say them aloud). Similarly, the clever rhyming of ‘it’ helps the following lines swing: ‘O pundit, your hair-splitting’s / so much bullshit. I’m surprised / you still get away with it.’

Mehrotra’s use and abuse of cliché, it could be argued, is an attempt to turn the language against itself, to be sceptical of the very skin the poem comes in. Indeed, as Doniger suggests, this strangeness, playfulness and mistrust of language is there in the original Hindi of Kabir, as seen in his attempts to tell the ‘untellable story’ (akatha katha) and in the ‘upside-down’ or ‘ulta’ poems—ulat bamsi, which is both a particular, wild sub-genre of Kabir poems and, really, a way of reading all of the poet’s work.

Nevertheless, there are times when these risks don’t pay off so well, and become a bit distracting. In the first upside-down poem, for instance, Mehrotra has the babu-formal language of ‘A guru prostrated / Before his disciple’ followed by the rhyming cliché, ‘This verse…/is your key to the universe’ and then the slangy ‘If you can figure it out’—and I can’t quite hear it all adding up to anything, the poem doesn’t seem to come alive. In another poem, just before ‘the vessels of wickedness’, the line ‘The screens of pretence are blown away’ seems to muddle up the literal and the slang senses of ‘blown away’.

In places, I’m not convinced by the music either. In the lines, ‘And ride your wild runaway mind / All the way to heaven’, Mehrotra has substituted ‘mind’ for the ‘horses’ of the well-known cliché; however, now the partial rhymes ‘ride’, ‘wild’ and ‘mind’ come too close on each other. For me, this has a deadening effect, and then the abrupt stop on ‘heaven’ seems to clamp down on any sense of freedom these lines were meant to convey.

There are also more tricky issues here, having to do with the intended audience, and with the fact that contemporary language can sometimes date very quickly. In the lines ‘Devotees of Rama / Should be in Sing Sing / Or have been stillborn’, ‘Sing Sing’ is not likely to do much for younger readers either in America or India; replacing it with ‘Tihar’ would certainly ring for young Indians but would be no help at all in America, where, it should be said, this book was first published. As with the short quotes—from La Bruyère, or Marcus Aurelius, or Tom Paulin, which can seem more random than illuminating—that Mehrotra introduces as echoes before some of the translations, the worry here is that the translator is trying too hard to wear his cosmopolitanism on his sleeve. It is, of course, also true that Mehrotra is trying to show us a way into his translations, to let us understand the readings and memory that informed them, but these light effects don’t seem quite adequate to that purpose.

So, in my opinion, the best versions of Kabir in English can still be found in Linda Hess’ 1983 translation of the Bijak (or ‘eastern’ tradition). I like their intensity, and they are also equally musical and contemporary in their language. Hess is better known as a scholar, but one shouldn’t underestimate her knack for lyrical compression—for instance, the lines ‘Respectfully, / with palms folded, / I offer this song // to the lord, says Kabir’ in Mehrotra’s translation are rendered in a more simple and elliptical way by Hess: ‘Kabir shouts: / both together one!’

This may still, however, be a question of which Kabir one is looking for, for there is at least one way in which Mehrotra’s project here is quite different from that of Hess’ or even his own previous work. In gently straying away from the originals, and in deliberately colliding a range of registers, Mehrotra is conducting a fascinating experiment in tone, risking awkwardness and also failure; it’s the kind of experiment that an Indian English poet would be uniquely ready for. Like it or not, we have to grapple with this. When it works and, interestingly, at times even when it does not, we certainly hear in Mehrotra’s voice an off-kilter but sardonic, bristling, dissonant Kabir, one that, in its own way, very much still seeks to be faithful to the original’s spirit: ‘Crying won’t help / When death already / Has you by the balls.’

Vivek Narayanan is co-editor of the literary journal Almost Island