Irish author Colm Tóibín is known for his accuracy of detail, whether it is in his descriptions of his walk along the Irish border (Bad Blood) or the emotions of Mary after her son’s crucifixion (The Testament of Mary). He talks to Nandini Nair about the rich solitude that domesticity offers, the genius of Jane Austen and watching his book come alive. Excerpts: 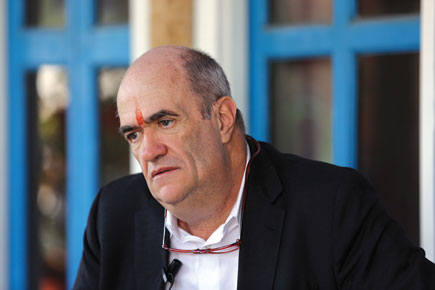 You mentioned recently that Toni Morrison’s God Help the Child was on your bedside table. Tell me what you thought of that book.
What she has done is terribly interesting, which is build this shadow of slavery into this world. It is so tempting for every African American novelist to write about race relations and she doesn’t do that. She writes about people and they happen to be Black. God Help the Child is another example of that.

Like Morrison, you are known for very strong female characters. Are there similarities between your women characters and hers?
I suppose there is. For both of us, history is important but also family. In my last three books, the main characters have been women (The Empty Family, The Testament of Mary, and Nora Webster). I got to go back to writing about blokes. But the drama in women’s lives is so interesting, especially from the earlier generation to mine, where there was a struggle going on between real intelligence and restriction. Women born in the 20s had a brilliant way of noticing and remembering, but were almost in a cage. Just describing how that evolved is very dramatic for me as it is for Toni Morrison.

The changes that have occurred within the woman’s world has been one of the most important struggles in Ireland over the last 50 years; women being able to work, women being able to control reproduction. The entire way women live, and the way women began to get old. In some of my short stories I have women in their eighties driving a car and getting their hair done. It is a new set of images that you can make.

You have mentioned before how when the bloke goes out to work, the woman is left at home, which offers a ‘rich solitude’.
Yes, my mother talked about that, being free from the drudgery of bookkeeping. She did some housekeeping, but not much. Her entire day was her own. Domestic space is interesting as a territory that a woman controls.

It is often said that most prize-winning books have men as their central protagonists.
I think people still think that men are more important.

Obviously you don’t.
I just don’t see that. The whole tradition of the novel from very early on, from Moll Flanders to Jane Austen to George Eliot, was a space where women and women’s sense and sensibility could play very freely. I don’t get it really. But I think it is the usual business that people think men are more important.

You teach Jane Austen at Columbia University, New York. You mention that you re-read Pride and Prejudice every year for your class. What does each re-reading throw up?
I think the extraordinary structure of the book and the way in which she manages to deal with solitude. The way Elizabeth moves from crowd moment to solitary moment. The way she moves from comic to when you realise that something quite serious is happening. A girl from such a family without any money marrying somebody very rich is almost out of a folktale. She [Austen] is applying it to England, where such a possibility is there because of increasing literacy and social mobility.

You divide your time between Ireland and the US, where you teach. Does the location impact your writing?
I live in my head. The amount of thinking you do is as important as the writing you do. Even coming right now in the car, there is a thing I am trying to find a solution to. So by the time I get down to writing, I have quite a lot worked out.

Brooklyn, the movie based on your book of the same name, released early last year to a rapturous reception. What is the experience of watching your novel on screen?
I have seen it six times. It is slightly odd. That something so many people are watching came out of something so tentative and small. It is a small idea that I had, that could have been a novella. I didn’t know what it could be. It came from this delicate space and it is now in this really solid place. I am very surprised and slightly bemused by that transformation.