Cartoons by the Colonised 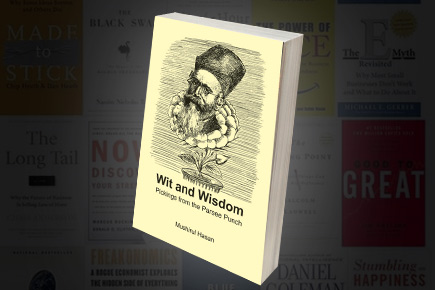 
Judging by the number of imitations it spawned in the mid-19th century in India, the satirical English magazine Punch was to colonial India what Wodehouse was (and remains) to aspiring humorists of a certain vintage. As art historian Partha Mitter once put it, ‘No single humorous publication made a deeper impression in colonial India than the English magazine Punch.’ And as the Manchester Guardian commented, a little less forcefully, on the magazine’s native knock-offs in 1905, ‘If these cartoons appeal to the average Hindu, he must be credited with a sense of humour and quite average intelligence.’

In 2007, historian Mushirul Hasan collected and published a fascinating compendium of these cartoons in his book The Avadh Punch: Wit and Humour in Colonial North India. Just as British cartoons of the time satirised the native character, the Avadh Punch, which ran from 1877 to 1936, featured scathing caricatures of the Raj, championed a brand of conservative nationalism, and contained fine comic sketches of early 20th century native types such as ‘the patwari, chawkidar, revenue agent, honorary magistrate, the England-returned and the title-hunting associations of noisy zee-huzoors’. 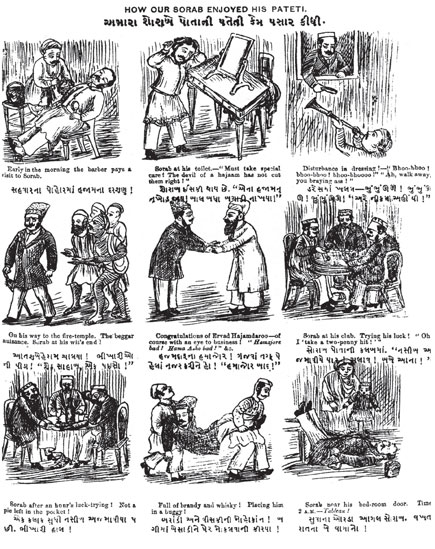 Hasan’s Wit and Wisdom: Pickings from the Parsee Punch is a fitting complement. It focuses on the only illustrated comic weekly paper in the Bombay Presidency, first published in July 1854 at the Apyakhtiar Press by Dadabhai Soheri. It ran–as Hindi Punch, for wider appeal–till 1930. Hasan’s Pickings converge on the year 1884, the year of the formation of the Indian National Congress. In an interview with a national newspaper, Hasan said, “The idea is to indicate with the cartoons, the political, economic, ideological, cultural and social trends when the Congress came into existence, through the eyes of a community which is enlightened, liberal, affluent and forward-looking.”

The cartoons, however, treat a far wider range of subject matter. There are works of gentle self-mockery, focusing on young Parsee gentlemen ‘at the toilet’, cursing their ‘devil of a hajaam’ (barber), lasciviously eying their own sisters, or repeatedly ‘taking a drop too much’ at the gentleman’s club and appealing to God Grog to come to their aid. Others treat local issues—municipal elections, for instance, and the outbreak of epidemics such as cholera and small pox. Most frequent of all, though, is the lively political satire: the Governor of Madras, ME Grant Duff, controversial for his partisan behaviour, is dubbed ‘The Grand Puff of Madras’, pacing about telling himself, ‘Caren’t a fig for their frown! I go straight to the Hills!’ and the Russian advance in the imperial war theatre of Central Asia is lampooned in the drawing of an embrace between a bear and a Pashtoon woman in a burqa.