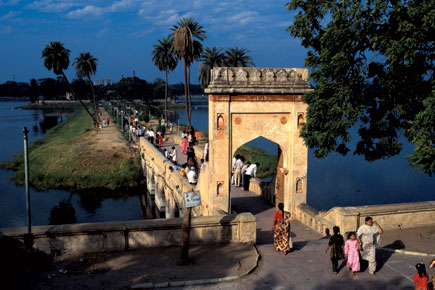 Ahmedabad: A city in the World is a sensitive, impressionistic biography of a place whose cosmopolitanism is being challenged by ‘a virulent nativism’. Journalist Amrita Shah takes us through the city’s warrens and pols in elegant, and restrained prose. In this painstakingly researched history we are tossed back and forth in time: from 2008 when the author first meets Meraj, a Muslim embroiderer whose life in the mixed neighbourhood of Asarwa- Chamanpura is shattered in 2002 by a mob of Hindu militants, to 1411 when the city is established, to 1987 when the BJP comes into power in the Ahmedabad Municipal Corporation, to 1878 when Rabindranath Tagore visits his brother in the city and composes his earliest songs, to 1960 when Gujarat becomes an independent state, to 1974 when the Navnirman student movement ignites the city, further back to the 16th century when the lively spirit of Vaishnavism permeates it, onwards to the grim July of 2009 which sees mass deaths due to liquor poisoning.

We journey through its neighbourhoods, craning our necks out of our autorickshaws to catch glimpses of passing lives and identities. We enter homes and offices of residents who narrate their versions of the city’s contesting myths, ideologies and aspirations. We meet Dalit poets, Gujarati vanias and Marwaris, Waghris and Chharas, Bohras and Shias, in a tapestry of social ethnography. We hear stories of friendship and hatred, of solidarity and suspicions. We encounter the young Sardar Patel still ‘foppish in a suit’, Gandhi on his way to Dandi, ‘reviled’ politicians and iconic bootleggers, the well-known Sarabhais and the little known Muslim boy Kallu, eulogised by his Hindu neighbours!

The camaraderie and the rivalries between communities are narrated soberly: Shah withholds her emotions and her judgement, even through the retelling of the Gulbarg Society massacre. But even she cannot remain unmoved when she speaks of the assault on Naroda Patiya and the ‘depravity’ of a pregnant woman’s belly being slit by a sword, the foetus removed and thrown into a fire. And we feel her pain. Her sympathies, here and elsewhere, are clearly with the working class and with the Muslims, but she gives every Hindu a voice, whether innocent or otherwise. Contradictions are laid bare: ‘There was a woman doctor who expressed deep anguish for a brutalised tribal woman but asked her tenant, a Muslim woman professional, to leave her house because friends insinuated that she could be a terrorist.’ The narrative is haunted by the ghosts of 2002 and the presence of Narendra Modi. Maybe today it is impossible to write otherwise about Ahmedabad’s place in the world. Historical monuments of hybrid beauty, Ahmed Shah’s citadel (Shah etches his name in her chosen spelling: Ahmedabad instead the official Ahmadabad or the vernacular Amdavad), even Gandhi and Patel, become irrelevant, as the city rushes ahead to embrace concrete and glass, build glossy offices, towering homes and replicas of famous temples, displace its poor, and reshape itself to fit a neo-liberal economy.

But Shah reminds us of the city’s past: the traditions of its civic and community leaders, its guilds and education societies, and the delightful story of the Bengali youth who came to be trained in weaving and ‘initiated Gujarati boys in the art of bomb-making’. There is a significant discussion on the Textile Labour Association and the decline of the composite textile industry; Shah links this to a change in the spirit of the city’s elite which once ‘led the city’s progressive battles, for freedom from colonial rule, for a better deal for labour, for women’s education, for public health, for breaking caste barriers… Now those with a voice have no interest in rocking the boat.’ The book begins and ends with Meraj, whose eyes lit up when the government unveiled a Special Economic Zone for the garment business; we meet him later in his now dismal house in the basti of Bombay Hotel, his operations shrunk. He is resigned, but doesn’t talk of returning to his native village in Uttar Pradesh. “Who would want to leave Ahmedabad?” he asks.

To pack so much into a slim volume makes everything cameo-like, episodic. Often we are left waiting for a story to conclude. It doesn’t. Clearly developed links between the Sabarmati Riverfront Project and the ‘cultural imagineering’ in conservation and marketing of culture would have been useful. But Shah does not shy away from indicting the heritage movement which makes ‘possible the reclamation of the Islamic, as poetry, architecture and craft, but not as a community or a religion’. We cover the cracks with a ‘determinedly happy layer of forgetting’. The book succeeds in helping us remember.