Bringing Back the Troublers 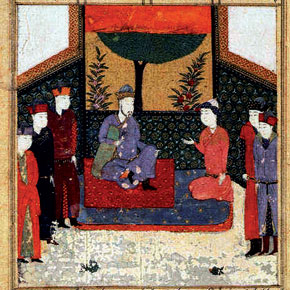 The classical is a name we give to the hybridity we have forgotten. Its seemingly unassailable guarantees of a pure identity, homogenous culture and continuity with an idyllic past conceal the turbulences that actually produce history: the encounters among dissimilar individuals and groups; the migration of soldiers, artists, scholars, merchants, adventurers and slaves across continents; the emergence of religious, philosophical, scientific and aesthetic innovations from the mixing of the familiar with the strange, the domestic with the alien. In the early phases of what we regard as Indic civilisation, for instance, we find the formative imprint of Greek, Persian and Chinese contributors. One of the Mauryan Emperor Ashoka’s most trusted Buddhist missionaries, Dharmarakshita, was Greek. So was Milinda, the king who poses a series of philosophical queries to the monk Nagasena in 2ndcentury BC Buddhist classic Milinda-panho, the ‘Questions of King Menander’.

Similarly, the 2nd century BC Greek ruler Agathokles and the ambassador Helidoros, who dedicated the Besnagar column to Vasudeva, were not the first Greeks to accept a pre-existing Vaishnavism—rather, they were the first-ever Vaishnavas in recorded history. Much Hindu iconography, including the attributes of Shiva and the Devi, first emerged during the Kushan period, between the 1st and 4th centuries AD, through the synthesis of Graeco-Roman, Persian, Central Asian and Indian elements. Enshrined as classical, and therefore timeless, these achievements are regarded as having always been ‘Indian’; their foreign origins have been erased from collective memory.

Jonathan Gil Harris, in his brilliant, elegantly argued and richly detailed study, The First Firangis: Remarkable Stories of Heroes, Healers, Charlatans, Courtesans and Other Foreigners Who Became Indian, engages with a more recent—and thus potentially more retrievable—phase of this process. He develops the portraits of 14 figures who arrived from diverse locations mostly between the 13th and 18th centuries, and came to occupy various niches in India’s intricate society, transiting among religions, languages, literatures and idioms of everyday life as they did so. The firangis of his title were, originally, the Frankish Crusaders who arrived in the Arab lands between the 11th and 13th centuries; the word passed from Arabic, through Persian, to a variety of languages including Urdu and Hindustani. It also came to cover a range of Europeans, among them Greeks, Slavs, Iberians and Britons.

Harris deploys it to connote an even wider distribution of foreigners active in South Asia during the pre-colonial period, extending the usage to embrace Armenian and Georgian Christians, converts to Christianity from Portuguese colonies like Malacca, Christian slaves from African territories, as well as Jewish migrants from Christian countries and even Muslim immigrants who had served in Christian principalities. Individuals who might more accurately have been described as Siddi or Habshi, such as the formidable Indo-Abyssinian soldier and vizier Malik Ambar, are also conscripted under the term, which, Harris writes, referred ‘to a migrant from a Christian land who had become Indian, yet continued, in a fundamental way, to be marked as foreign’. Harris’ account of this complex predicament, with the palimpsestual diversity of everyday performances, acts of translation, gestures of accommodation, and cultural negotiations that it involves, is underwritten by his own decision to live in India. Originally from New Zealand and descended from migrant ancestors, the academic and writer has made Delhi his home.

Among his characters is the Iberian physician Garcia da Orta, delightfully characterised by the author as ‘the hakeem of Bombay and Ahmadnagar’. Of Sephardic Jewish origin, a member of a community that had been part of the multi- religious ecumene of Muslim Spain and had converted outwardly to Christianity during the Catholic Reconquista, Da Orta practised several forms of camouflage—even as he gave up the orthodoxy of Galenic Greek medicine and learned from the Vaidyas of the Konkan and the Unani practitioners at the Ahmadshahi court.

Equally marvellous is the career of the English cleric and poet Thomas Stephens. The author of the Kristapurana, a classic he composed in Konkani and Marathi while resident at Rachol in Goa, Stephens anticipated Milton’s Paradise Lost by six decades, in creating a Christian epic of the English Renaissance. Describing Stephens as ‘the kavi of Rachol’, one who was trained in Greek and Latin and apprenticed himself to Portuguese, Sanskrit, Marathi and Konkani, Harris boldly argues that he ‘ought to have been regarded as one of the great Renaissance English poets. But his accomplishment is more or less completely unsung, for one simple reason: he wrote his poem not in English, but in Marathi and Konkani’. This willingness to displace a conventional European location with an Asian one, and to set aside the choice of language in favour of formal experiment as the defining criterion of such a literary enterprise, marks Harris as a literary historian of startling perspicacity.

Among the other personae—the term, literally meaning ‘masks’, is pertinent—who populate this book are Niccolo Manucci, the Venetian doctor who became the ‘Siddha Vaidya of Madras’; Bibi Juliana, of Armenian or Portuguese origin, who married a high-ranking member of Emperor Akbar’s court; and Malik Ayaz, the 15th century Russian slave who became an admiral in the service of the Gujarat Sultanate, then a naval superpower in the Indian Ocean. Harris situates his biographies within entangled histories of travel, encounter and circulation. The process of ‘becoming- other’ is demonstrated, not as an abstraction, but as an intensely visceral and experiential reality. The testimony of the travelling, transitive body is at the centre of this book, which is a feat of historical writing as well as a literary treasure.

‘Eating the cuisine of a different country changes not just our taste buds but also how our bodies smell. Absorbing a new terrain’s distinctive germs alters our bodily functions and immune systems. Treating our bodies for local diseases means ingesting new plants, chemicals, or minerals that transform our chemical as well as mental composition. Speaking a new language necessitates using our tongues, lips, facial muscles and even hands in new ways,’ observes Harris. ‘Moving repeatedly through a new landscape or cityscape necessitates transforming our skills, training our bodies to acquire new proficiencies within the physical limitations imposed by the space… It’s no accident that the word ‘travel’ derives from the French travail, meaning ‘work’. We may associate travel now with rest and recreation, but in pre-colonial times, it was always work—work on the body as much as with the body.’

The First Firangis takes its place in the dazzling lineage of studies like William Dalrymple’s White Mughals and Sanjay Subrahmanyam’s Three Ways to be Alien: Travails and Encounters in the Early Modern World, and counts, among its inspirations, Dom Moraes and Sarayu Srivatsa’s magical book, The Long Strider: How Thomas Coryate Walked from England to India in the Year 1613. Harris acknowledges all these exemplars generously in his Notes, which are cast in the form of a sumptuous bibliographical essay. As we follow his protagonists through their shifting loyalties, their vigorous explorations of unpredictable conditions of belonging, their strategic use of pseudonyms and cryptonyms, their practice of veiling and camouflage, we begin to see them as contributors to local intrigues and global quests, who resist being dragooned into any simple-minded notion of identity.

Each of these figures corresponds to Harris’ category of the ‘troubler’: one who disturbs not only the conventions of his or her immediate time and place, but also shakes up the received fixities of region and language that form part of the modern nation-state’s invented, retrospectively imposed tradition. Instead of answering tamely to the definition assigned to them by those in normative and prescriptive authority, Harris’ troublers extend themselves through itineraries and trajectories, improvising their selfhood or subjectivity by means of bricolage, piecing together different elements of cultural practice, social collaboration. The 14 figures who dominate this book were not practitioners of assimilation, which implies an acquiescent fitting into an existing system. Instead, leading what Heinrich Heine termed an ‘experimental life’, they enacted a cosmopolitanism that was embedded in everyday life rather than proceeding from a priori ideological convictions. Nor were these lives of untroubled comfort. Each of these border- crossers confronted to some extent the threat of persecution, ignorance, misunderstanding and the limitations of status or gender. To his credit, even as he refutes the banal ‘clash of civilisations’ approach, Harris does not fall into the opposite error of imagining the utopian harmony of a convivencia free of schism and bigotry.

By inviting his Indian readers to revisit the complexactuality of South Asia between the 13th and 18th centuries, Harris offers them both a body of evidence and a method by which to reject the single, narrowly interpreted Past that is being pasted over the unruly plurality of pasts that we inherit, and to refute the hard-edged religious and cultural identities that are being manufactured to replace the many-skeined and capacious imagination that informs our lives. The First Firangis is not merely a diverting account of visiting eccentrics through the centuries. It is a salutary engagement with frameworks of belonging that existed before the nation-state, a rather recent artifice that has been so firmly naturalised into experience and reified in ideology that many retroject it onto prior history. Harris addresses the bogey of cultural authenticity and suggests that we review critically all the nativist cant that threatens to constrain the amplitude of cultural choice and expression in India today.

(Ranjit Hoskote is a poet, cultural theorist and curator. He is the author of Confluences: Forgotten Histories from East and West)