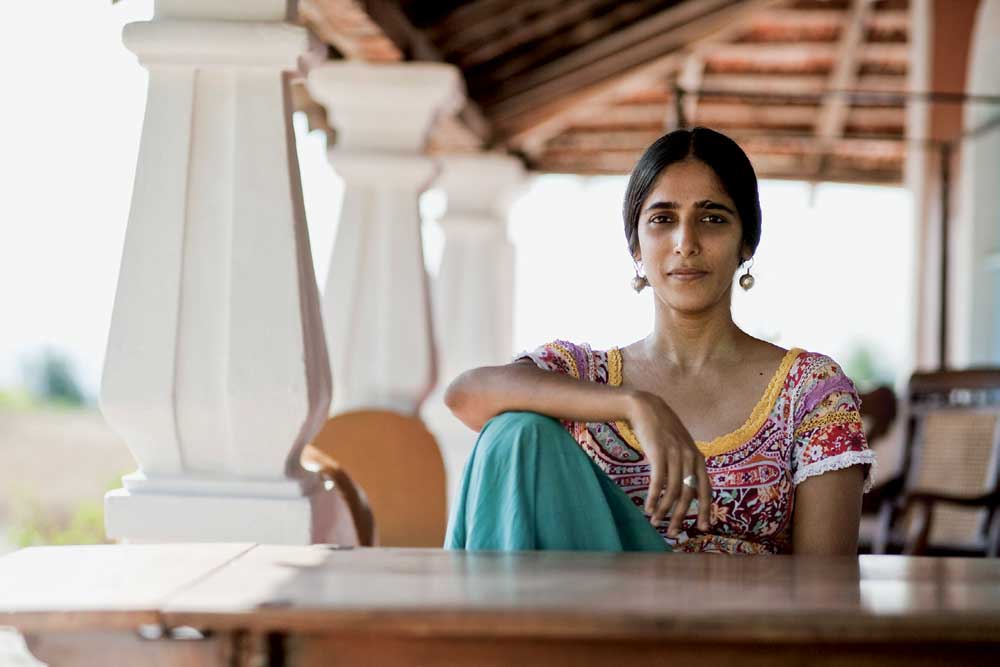 ASHWATTHAMA IS ONE of the most fraught anti-villains of the Mahabharata. Cursed with painful and suppurating immortality, the myth is that he still wanders the earth paying for the sin of slaughtering the Pandava princelings as they slept. (Hindi afternoon news channels, incidentally, love stories on bizarre Ashwatthama ‘sightings’ as much as miracle snakes.)

In Sauptik, Amruta Patil’s brilliantly rendered second graphic retelling of the Mahabharata, Ashwatthama is the sutradhaar. Her first, Adi Parva: The Churning of the Ocean, retold the epic through the eyes of Ganga. The word ‘sauptika’ is derived from ‘sleeping’, thus evoking the night massacre in Kurukshetra.

That is the only place that this tormented, naked outlier searching for death finds peace in Patil’s imagining—a shamshan bhoomi where the mortality play runs 24×7. Its two dons, Langda and Bhainga, get the funniest lines in the book. It is to them that Ashwatthama narrates the story—of his birth as a chiranjeev in Drona’s home and a childish taunt from his Pandava playmates that sets off the whole sad saga.

Patil’s characters are not the cardboard heroes and villains we know. Duryodhana wasn’t always a bundle of seething insecurities, Arjuna is not always heroic, Draupadi is not quite the victim of a casual crack about brotherly sharing from her mother- in-law, and Nakul and Sahdev are not also-rans in the drama.

Patil’s strong preoccupation with the forest is a strong thread through the narrative —the brutal devastation of the fragile Khandav van and every living being in it to raise Indraprastha; Hidimba and her inseverable links with the forest from which she would never be parted, not even for the joys of being a Pandava wife; the trees, flowers and fecund greens and reds and fruits that suffuse the lives of the princes in exile.

Patil also finds voices for the oppressed outcasts whose lives mean little for Mahabharata’s aristocracy: the nishads, for instance, Eklavya and the hunter whose arrow kills Krishna in the end. She also creates space for the living ‘dummies’ who are burnt alive in the house of wax to fool the Kauravas—an episode we often give so little thought to.

But more than anything else, Sauptik reinterprets the women of Mahabharata as vital beings, not pretty props who push the narrative in critical directions. Even the recognised ‘victim’ types have some agency over their fate. Pritha, who will answer no questions about the father of her sons; Sati, whose determination turns Shiva into a householder; and Draupadi, who consorts with five men because they each bring to her an outstanding quality.

Some of Patil’s most luminous artwork is devoted to Draupadi: ‘Draupadi was queen without ever needing to be crowned one. Regal was a spinal cord quality… To know Draupadi was to want her, and be pierced by the realization that she was not in your league, that you would permanently burn with longing.’ And it is not Krishna’s boundless fabric of modesty that saved her from mortification in the royal sabha, it was her own ‘terrifying divinity’.

But it isn’t all philosophical ponderance; there are sassy sparks of humour that light up the book. ‘Arjun had the moves, but he was no dancer. He was a technocrat.’ Or Hidimba energetically wooing Bheem: ‘You big sexy man, be mine.’ But above all else, there is Patil’s outstanding art —a mix, as she says in an interview to the Indian Express, of Roerich, Diego Rivera’s Mexican muralism (thus the Frida Kahlo strains—Draupadi sports a unibrow), Kalighat influences and Rajasthan miniature paintings. There are also fabric swatches on collage pages, and the sequence with the gopis is simply gorgeous. From one page to another, there is no telling what effect Patil will use in terms of colour, technique or visual interpretation to take her story forward.

As the book ends, Ashwatthama, in his burning misery, poses to Krishna a very basic question about his arch enemy, Arjun, the man who gets all the taalis in the Mahabharata: “What is so great about a man who can only see the left eye of a wooden bird when a glorious forest lies beyond?” What indeed.