Blast from the Past

A Hitchhiker’s Guide for the inter-galactic tourist with a mission? The lunacy of Douglas Adams sure is dead 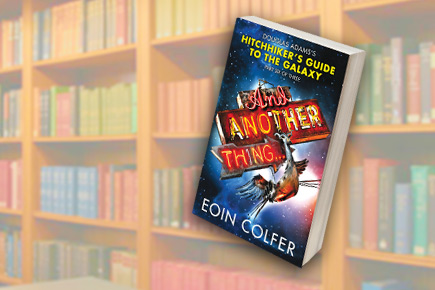 A Hitchhiker’s Guide for the inter-galactic tourist with a mission? The lunacy of Douglas Adams sure is dead.


The first thing wrong about this book is its size and shape. It’s not hardcover. It’s not a handy paperback. It’s one of those increasingly fashionable extra large paperbacks, where the publisher is saying to you, we-know-you-won’t-pay-us-enough-for-a-hardcover-but-how-about-shelling-out-a-few-extra-bucks? The original Hitchhiker’s books were slim and lethal, and slipped easily into your algebra book.

Eoin Colfer is the author of the bestselling Artemis Fowl series, and he’s a capable writer. But there seems to be a fundamental flaw in his approach. Let’s say you loved the first five volumes of the trilogy, and you’re dying to read another. Logically, you would expect to hear the same voice. But you don’t. Colfer has gone on record to say that he consciously avoided trying to ape Adams’ writing style. Which is odd, to say the least. He should have called it ‘Why Bother?’

So much for the voice. When it comes to references, it is, in fact, a bit too much like what came before. The Pan Galactic Gargle Blaster, Eccentrica Gallumbits and the Ravenous Bug Blatter Beast were all funny the first time around, but by the sixth or seventh time, the charm begins to fade somewhat. The same goes for the extracts from the Guide. There are far too many of them, and most are not very funny.

To be fair, part of the problem is that Colfer is a star himself, with over 18 million Artemis books sold worldwide. There are those who accuse him of cashing in on the Harry Potter phenomenon, but many others tried the same, with limited success. So he knows his job.

When Adams was doing the original radio show for Hitchhiker’s, as deadlines loomed, he was often locked up in his hotel room by desperate producers, and legend has it that several of the original speaking parts were given to the actors on pieces of toilet paper. Nobody involved with the project had the faintest clue what was going on, most of all Adams himself, who spent the bulk of his time trying to get free meals. While the novels were more refined, the original creative process still shines through in all its unbridled lunacy.

This one is much more polished, because Colfer is a pro, and it makes it weird. The characters have purposes and motivations and everything. In the original series, no one had an actual discernible purpose, with Zaphod game for anything that came his way, Trillian a self-declared inter-galactic tourist, and Arthur mostly concerned about where his next cup of tea would come from. Even the cows have a back story here, although they remain extremely obliging.

If you’re a fan of Colfer, you might enjoy this. But if you’re a fan of the Hitchhiker’s Guide, and if you find yourself stranded on a desert island with absolutely nothing else to do, we would suggest the following:

» Dig a very deep hole in the sand.

» Place the book carefully inside and cover it, to prevent anyone else who gets stranded on the same island from suffering the same fate.

Douglas Adams is dead, and it’s time we told him so long and thanks for all the fish. May he rest in peace.