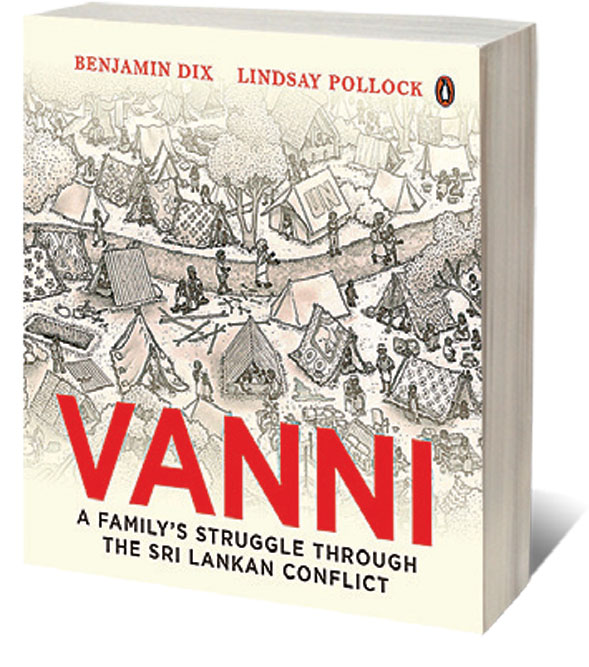 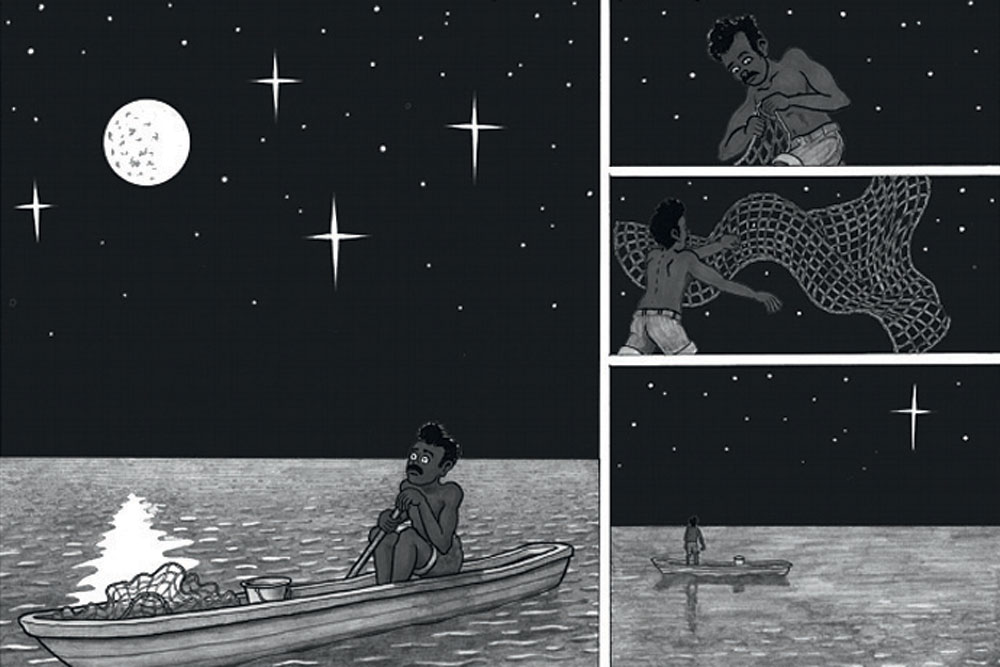 
ACROSS TWO WORDLESS pages, a wave breaks through a shorefence of coconut trees and dashes over horrified people and their homes, engulfing the village of Chempiyanpattu as four members of a family watch from the roof of the church—one person embracing the crucifix as they each hold on to the other desperately. But the 2004 Indian Ocean tsunami, so vividly depicted here, is not the worst of what happens to the characters in Vanni, which traces their journey from shortly before it until 2014. Illustrated by Lindsay Pollock and written by Benjamin Dix, Vanni is based on true stories and beautifully captures their myriad complexities.

Antoni, a fisherman, returns to his work with a net provided by the UN—little do his family or his neighbours know how much they are going to come to depend on international aid in the coming decade. The year following the tsunami is a turning point: a nationalist regime is elected to power in Sri Lanka and the militant separatists known as the LTTE increase their own efforts. Tens of thousands of people became caught in the crossfire, in a civil war that is acknowledged, but about which complete information remains scarce in the media, archive and art. Vanni aims to expand that repository by tracing the plight of several characters, some of whom will eventually become collateral damage in the war’s denouement in 2009. By covering a long duration in their lives, it provides humanising and non-reductive contexts to their experiences.

One of the most outstanding aspects of this graphic novel is that it concerns itself with the concept of survival, rather than tragedy or triumph. It records how trauma sets in— a small boy who had watched his mother being shot dead stares into a fire without response; elsewhere, an elderly woman breaks through her catatonia to suggest that her cadre son could still find a wife. Characters have flashbacks, moments of moral confusion, nightmares and surges of hope. These are experiences that only the living can have; they are proof of what has been lived through. As Chirapathi tells Segar, as they sit watching the sea that had devoured their home, ‘Find a reason to come back to life.’

Benjamin Dix worked in Sri Lanka both with Norwegian People’s Aid and the UN; Lindsay Pollock’s engagement with the country appears to have begun with this book and happened at some remove (visiting refugees in Tamil Nadu and conducting interviews in London are process elements described in the notes).Vanni successfully evades most of the pitfalls that come with creating works on cultures one does not belong to, except for one slightly guilty-sounding reference in the introduction which simplistically traces Sri Lanka’s contemporary divisions to British colonialism. There is a rare purity in this work, a respectful deference to those whose stories it tells, which strips it of chauvinisms which even (and sometimes especially) those embedded in a milieu possess, and this renders any inaccuracies forgivable.

As the culmination of the war grows closer, the narratives become unbearably painful, yet Dix’s storytelling has a precision that maintains equilibrium. Pollock makes effective use of monochrome, strikingly rendering everything from the gradients of darkness in skin, night sky and water within a single panel to swirling bomb-smoke, detailed foliage and evocative facial expressions.

Vanni is an extraordinary graphic novel, palpably created with equal amounts of compassion, sensitivity and intelligence. It has no political agenda. It valorises no one and neither does it take pleasure in finding catharsis through anyone’s victimhood. Yet it is unflinching at the same time, depicting the most heartwrenching events. It does so commendably, without resorting to war-pornographic manipulation. Despite Dix’s anger and sorrow at the world’s failure at preventing the genocide, the book deftly avoids provocation, choosing instead to carefully, meaningfully—and hauntingly—bear testimony.