At the court of the foolish king 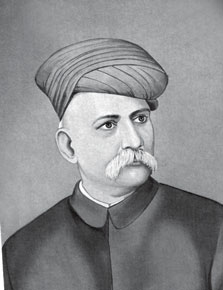 Nandshankar’s bardic tale of Karan Vaghela, written in about 1863, is a rollicking old yarn. Raja Karan was named ‘Ghelo’ (foolish) and this story gives us some clue as to why the epithet was attached to his name. Vaghela was a king who ruled parts of what we now call Gujarat between 1296 and 1305, and he had to face the conquering armies of Allaudin Khilji as they approached his kingdom. The reason for their advance forms the bulk of this heroic narrative, which carries many of the tropes and motifs that we are familiar with from other stories of the time.

Karan is a good Kshatriya king, served by an able Brahmin prime minister, Madhav, and all is as well as it should be when the castes are in order and everyone, both men and women, behave as they should. One day, Karan sees a beautiful woman and is utterly smitten. He arranges to have her abducted before he realises that she is the wife of his beloved and trusted Madhav. As the lovely Roopsundari is being taken away by the king’s soldiers, her brother-in-law tries to protect her and is brutally killed. His young wife then decides to commit sati. Madhav’s family is decimated and he vows revenge, travelling to Delhi with a Jain companion and instigating Allaudin to invade Karan’s kingdom and steal his daughter.

Vatsal and Mukherji’s easy and lucid translation reflects their enjoyment of this work. There are boons and curses, bhooths and possessed queens, goddesses and dayans, horses and soldiers, grand battles and narrow escapes, and love and lust and intrigue. Apart from foolish kings and lovely ladies, there are also brave and wily generals, star-crossed lovers, lost-and found-princes, all described in great detail and with obvious pleasure. There is the excruciating sati scene (the young wife of Madhav’s slain brother becomes the bhooth that possesses Karan’s lawful queen), and a marvellous episode with a corpse in a graveyard when Harpal (no spoiler for who he really is) decides that he has to use the dark forces to exorcise the bhooth that is tormenting Karan’s queen: ‘As the corpse tried to unseat him, the shrine resounded with bloodcurdling shrieks and cries. He was encircled by wildly dancing demons; they laughed fiendishly, closed in menacingly, intent, it appeared, to kill him; some threatened him from a distance, their grotesque faces terrifying. Chudels and vantaris balancing burning hot braziers on their heads howled and screamed. Terrifying buffalo-headed rakshasas tried to devour him.’

For these alone, the book is worth reading, in addition to its descriptions of court grandeur and etiquette and the superbly recounted debate between Jain teachers and Brahmins as they battle for the king’s favour. There is much in here that will remind readers of older texts like Kathasaritsagara which contains, for example, the Vikram and Vaital cycle, but also presents a rich and diverse universe of competing religions, restrictive caste practices and exciting tales of travel and adventure. Karan Ghelo is deemed a novel because of when it was written (the 1860s) and for the fact that it actually creates psychological portraits of its characters. But what makes it so much fun are the nested tales, the intrusion of the authorial voice and philosophical discourses. Thus, Karan is just one of many characters in a swirling plot that is as strange as it is familiar.

Nandshankar Mehta taught English for most of his life and like many of that time, he was a reformist and uses this novel to express those views. For example, in the sati scene, it is the young woman’s mother who thinks through the ritual significance of this barbaric practice and the social implications of widowhood. And when Karan’s daughter falls in love with a Maratha prince against her father’s wishes (the Maratha prince being of a ‘lower caste’ than the Rajput princess), Mehta’s own voice rings through the text as he weighs the pros and cons of an arranged marriage.

Mehta’s novel represents a colonial moment from Gujarat, much like that represented in Bengal by Bankim’s Anand Math. No surprises, then, that like Bankim’s novel, Karan Ghelo’s politics are a little hard to stomach, riddled as they are by a deep prejudice against Muslims and the dangers they present to Hinduism as well as a solid endorsement of caste and caste hierarchy. For, Karan Ghelo is also a work of Gujarati parochialism and pride, and one cannot but note the significance of our own historical moment in which this English translation has been published. For all that I enjoyed the book, despite its stomach-turning politics, I am sure there will be readers who love it precisely for the same politics.