In casting doubt on US rescue missions, Stiglitz saves economics from autism charges. 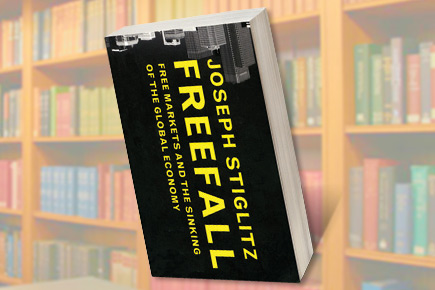 In casting doubt on US rescue missions, Stiglitz saves economics from autism charges.


Pardon my saying so, but economics has been called ‘autistic’ before, and will be called again: ‘All statistics, no sensitivity.’ And that too, without Karan Johar at hand to film My Name is Faire,‘f’ from the lower-lip frenulum.

It’s the Great Recession, and economics needs Joseph Stiglitz if it is to sell itself as a cuddly creature. So long as information gaps riddle laissez faire, he insists, the only way to put an economy in touch with feelings humane is to let people who actually have such feelings intervene. Judging by his new book, Freefall, he himself is only too keen to err on the side of sensitivity. In parts, it even sounds like a Highway 61 ramble, with his rousing rants against the system revisited and equally grand errors of data that can glare anyone to an abrupt halt except the most casual. Global oil prices peaked in July 2008 not at $137 per barrel, but $147. And the bizarre market crash of Black Monday took place not on 19 October 1989, but 1987. Man, you must be putting me on!

There are some level-with-me moments too, such as Stiglitz’s use of the collapse of civilisation on Easter Islands as a metaphor for the US financial system. Like a poetic song sequence, it has a you-get-the-picture quality that gives his casualness its sparkle. To him, if America’s Free Market is ideological idiocy, its bail-out of banks is daylight robbery… ‘ersatz capitalism, the privatizing of gains and socializing of losses’. Be it the Bush Administration’s use of public funds to buy banks’ toxic assets, or Obama’s attempt to get private investors help make the right picks in doing so, Stiglitz is scathing in his criticism of these ‘heads they win, tails you lose’ deals. He would rather use the money to bail out home-owners who can’t pay their loans back, just as businesses gone bust are rescued, by a conversion of debt to equity, even if millions of homes are left in part ownership—ahem—of the State!

Stiglitz reiterates his old point that in a world of information asymmetries, in which deal-makers are not equally informed, the Free Market left to itself cannot be efficient. Stiglitz won his part Nobel prize in 2001 for addressing just this sort of market failure, but it escaped the attention of bankers.

Stiglitz does economics a good turn overall, even if he lets his rhetoric as a protester outdo his rigour as an academic. The howlers apart, he fails to invoke George Akerlof’s ‘lemons’ to explain the perils of bad lenders driving out the good (on greed induced by an easy money policy). But then again, with such mind-boggling complexity, who knows what’s how likely to blow up? Warren Buffett, an investor who made a fortune on being clear about what he doesn’t know, once described derivatives as ‘WMDs’. Some six years later, sadly, such confusion persists that a real rescue is still not very easily done. If closing information asymmetries on destructive power is hard, resolving empathy gulfs seems harder still.