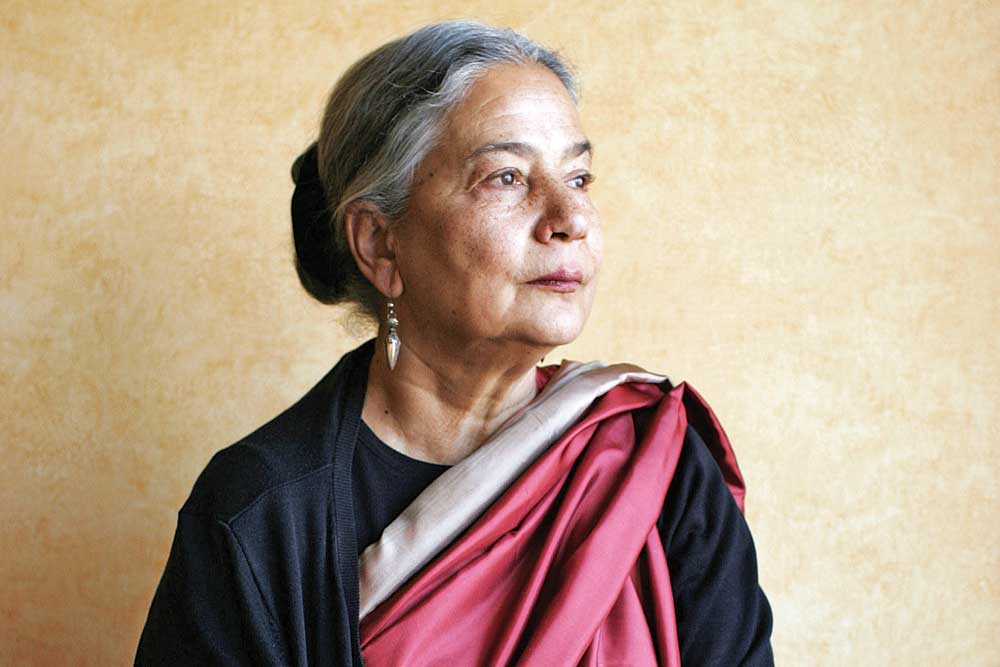 PEOPLE WILL TELL you that Mexico is like India, but it isn’t till you get there that you realise how true this is. I too felt the thrill when I visited this summer; here was all the spontaneity and colour of India, without the critical gaze and the woman’s daily concern for safety, even while there were incidents of crime and political danger one both heard about and perceived. Here was a sexier version of India, one layer of language between us. Here was the country I knew refracted by a country I understood viscerally, as a writer I admire had witnessed many years earlier.

The past ‘was alive here—crepuscular and underground, but also palpable’, writes Anita Desai in The Zigzag Way, her 2004 novel set in Mexico. In India, too, the past is incredibly alive, as witnessed in 81-year-old Desai’s 17 books. The novels of this master writer are very often about faith, about courage, about the need for renewal in the past as one looks to the future. A ghost town in the Sierra Madre is the backdrop to the journey of discovery her protagonist Eric takes in this one, trying to find purpose for his academic work, his book and his timid little life, usually propelled forward by the much more confident women who surround him. It is through Em, his girlfriend, that he realises he will find out more on his own; through Dona Vera, the unlikely ‘queen of the sierra’ who marries her way out of wartime Germany and takes up the cause of Huichol Indians, he finds that even those who proudly display their pasts have their uncertainties.

“I recognise an Indian core [in Mexico], it’s a very Indian country. I get the sense that every stone, every rock has a great history to it,” Desai said (Sampsonia Way, 2014) when speaking of her own country’s ‘sense of immense time’. The connection with Mexico began when she booked a flight to Oaxaca to escape the New England winter one year while teaching at MIT. Last year, while accepting the Blue Metropolis Literary Grand Prix, she remembered how it felt: “The minute I touched down, I felt so at home… I was dazzled by this place I knew little about, yet I also found it oddly familiar. There are such affinities between India and Mexico. Both are ancient civilisations—you feel that every stone you turn over uncovers a history that goes so far back. The religiosity is also similar, and the love of family and festivals and food.” (Montreal Gazette, 2017) A Malayali I met in the Chiapas town of San Cristobal de las Casas told me that the last he had checked, there were about 250 Indians like him living in Mexico (a number he suspected had since grown).

“I was back in a very, very old country… It wasn’t a foreign place to me… Both [countries] have had 300 years of colonial occupation, Spain in one case, Britain in the other,” she told The Independent, around the release of The Zigzag Way. It was clear that Desai was delighted at making this connection, describing peyote rituals and Zapatistas with trademark clarity. After recognising the sort of self-imposed exile she found herself in once she had left India at 45, she knew she was an outsider when she returned to visit the motherland. Mexico was now the closest she could get to that sense of a great span of time.

Desai chose to engage with another country that wasn’t of the first world late-ish in life, in a daring turn that is very like her; she often strode first into other realms. After all, as one of the characters in The Zigzag Way tells us, ‘Everyone comes from somewhere else.’ We are reminded that Mexicans are said to have come from Asia, across the Bering Strait; that people from Cornwall are meant to have come from Spain. Desai is Indian, but her mother came from Germany, more literally; we are all a product of movements that preceded us.

Ultimately, the more daring question is how much we must choose to lean on the past. Being true to oneself eventually resurrects histories; authenticity is a prized theme in Desai’s work

After leaving India for the United States, she kept leaving it for Mexico, come winter. The perennial outsider and chronicler of outsiders, she legitimised wanting to disrupt the familiar. She got inside the skin of what it was like to be on the outside; for an Indian reader who had to deal with the problematic notion of being ‘exotic’, that most annoying of words, this was an invaluable exposure to perspective for a generation of Indian and other readers. If one was exotic oneself, how was another culture ever to be looked at with a neutral or level lens? Wasn’t the truth that there was no central or neutral playing field from which to look out at India, England or Mexico?

Desai’s genius lies in combining an affinity for the small, overlooked story with enabling generations of people outside the noisy mainstream to embrace what they love about India, inside the din. They have called Desai the best living Indian writer, and while she is sometimes overlooked for showier writers like Salman Rushdie, the title stands the test of time. She is gracious, acute and gentle in person; I had the fortune of meeting her when I helped manage her visit to Delhi, around new editions of her work we were producing at Random House India, about a decade ago. In her prose, her gaze is steely, fierce, finely tuned to every nuance of both male and female worlds. The kind of cosmopolitanism she enabled, in books like Baumgartner’s Bombay, featuring a German protagonist in Bombay, was balanced by the small worlds of deliciously local books like Clear Light of Day and Fire on the Mountain, and, that favourite of many a reader, In Custody.

Still, The Zigzag Way was new territory. What did it mean for an Indian writer to set her story in a wholly foreign place, devoid of Indian characters, when the book was released? About 15 years ago, the book was a puzzle. Novels like British Indian writer Rana Dasgupta’s Solo (2009) may have taken up that gauntlet, but they still throw off readers who expect someone of Indian origin to be preoccupied chiefly by Indian characters and worlds. An Indian writer is meant to be giving India to the world, according to the rules of the game.

‘There was nothing about this world that I could see intersecting with the territory of Anita Desai,’ Abraham Verghese says in his introduction to its new edition in 2009. But, soon enough, the connect is apparent: ‘By finding his place in the chain of history, by finding the narrative of his ancestors, [Eric] can pick up the thread of his own life and go on with renewed faith.’

The Zigzag Way was new territory. What did it mean for an Indian writer to set her story in a wholly foreign place, devoid of Indian characters, when the book was released?

This, of course, is a most Indian quest. Continuity is coveted by even the most peripatetic among us, and especially prized when found in far-flung places. Desai excavated meaning from a country on the other side of the globe in a truly poignant way.

IT IS A MORE immediate version of this sensation that comes to Eric, who describes it ‘like stumbling into a rabbit hole—falling, falling… till all was a welter of strange words, strange names churning around him. Then, with a bump, landing upon the startling awareness that many of them were actually familiar to him. It was like being in a crowd of swiftly moving strangers and finding that there were faces among them that you recognised.’

The redemptive quality of our collective peregrinations is finding how much we all have in common, literature often suggests. In this case, this ignites self-discovery: the visit to Mexico jogs a hidden past that Eric’s very English father hasn’t relayed to him, except by hinting at letters from his own parents, who moved from Cornwall to Mexico for work in the mining industry and belatedly dropping the news that he was born in the latter country. Soon, Eric finds out why he feels so out of place in the outdoorsy Maine fishing family his father married into. Desai describes, beautifully, how this kind of quiet discretion has complicated Eric’s life. He is a hapless character, always in the wrong place at the wrong time, standing at the edge of a group too tentatively or reading the wrong book in clear view of his hostess—yet, even he is ultimately transformed by the magic of Mexico.

On the occasion of La Noche de los Muertos, which lends both title and backdrop to the fourth and final part of The Zigzag Way, Eric finds his truth in a visitation from the afterlife. In Mexico, a country decorated ostentatiously with myriad casual talismans of death—skulls decorate many establishments, even today—this is the day that people remember the dead, taking them offerings that will appeal to them. That same fluid movement between life and death can be seen in India, of course, whether through the Hindu idea of living many lives or the awe-inspiring ghats of Benares.

A new vista opens up in Desai’s consideration of Mexico. She found its old mining towns of great interest: “Places that speak of great grandeur but which are now all in ruins… I think that’s what a writer really needs, some kind of empty space to which you can lend your imagination,” she said. “Mexico is so full of foreigners, people from Europe, from all over the world who made themselves new lives there… One wonders what they were running away from.” (The Independent, 2004)

The ladder she descends—the epigraph to Part I of The Zigzag Way reminds us of the ancient Chinese belief that time ‘is not a ladder one ascends into the future but a ladder one descends into the past’—takes us back to what these people were fleeing, in the form of economic and political problems, societal disruptions. Often, just the status quo. The fact that people would take such risks, upset the balance to such an extent, for the small chance of a slightly better life—this is the kind of story that Desai inhabits. This is the ‘zig-zag way’ she elegises, which crisscrosses on into life. Even if one is ‘walking away, leaving behind one chapter, starting another’, as Eric recognises people have done, there is a value to reckoning with the past.

Ultimately, the more daring question behind it all is how much we must choose to lean on the past. Being true to oneself eventually resurrects histories, regardless of the route you take; authenticity is a prized theme in Desai’s work. But when The Zigzag Way ends, everyone is going back to where they came from—and we, like Eric, must use the descent into the past to find our new way forward, as this formidable author has.