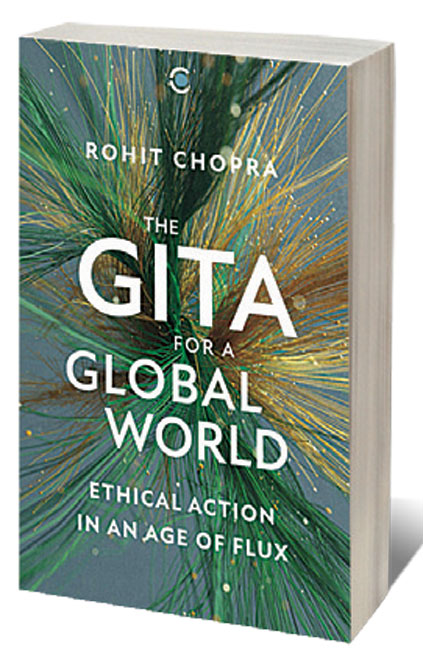 The Gita for a Global World: Ethical Action in an Age of Flux Rohit Chopra
Context
248 pages | ₹ 599 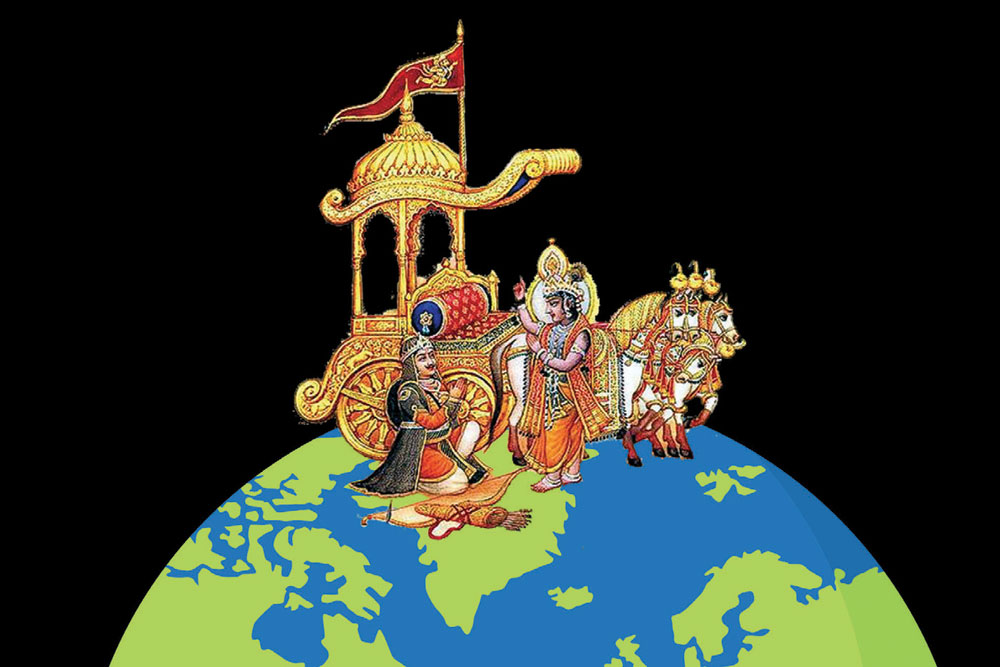 
WAR IS IMMINENT. A gifted warrior develops cold feet at the prospect of killing family members. His charioteer, an expert casuist, convinces him to lift his bow and arrow and do what he must.

This conversation between Arjuna and Krishna is familiar not only because it is part of the Mahabharata but also because it has flown way past the nest of the epic in which it was born. Written in the first or second century CE, the Bhagavad Gita has assumed a life of its own, influencing generations of people across the globe through centuries, to become one of the most influential texts. A new book posits that it has the potential to inform the present moment too.

“What could the Gita, a nonmodern text, tell us about the particular phase of contemporary existence we call globalised life or global capitalist modernity?” asks the academic Rohit Chopra in his deeply researched book The Gita for a Global World: Ethical Action in an Age of Flux. Before he takes us on a robust tour spanning major world events of the 20th and 21st centuries, he makes one point clear: this is not a self-help book. Indeed, Chopra’s book does not assume that this single 700-verse poem can contain wisdom for all of life’s conundrums. What it does imagine, however, is that the Gita can serve as an ethical treatise during ‘crisis globalisation’, a time clouded by chaos and insecurity.

At its rawest, the Gita is a clarion call for war. How then can it be used as a torch light today? If everyday language is any indication, we are already on the brink of war, metaphors of which are routinely used to describe the climate catastrophe, state violence, inequality, oppression of vulnerable groups and, more recently, the pandemic. Now that we are on the battlefield, we might as well think of how just our actions can be. What is our dharma?

Chopra (whose previous work includes Technology and Nationalism in India: Cultural Negotiations from Colonialism to Cyberspace) identifies three major currents flowing through our times: action in the face of uncertainty; the tangling of cultural, religious and other kinds of differences; and the state of permanent war and violence in the post 9/11 global landscape. In this scenario, it would serve us well to adopt “Arjuna’s anguish, doubt and despondency [which] provides a superior ethic for how to be, live and act,” as opposed to the unquestioning certitude displayed by Krishna, or the strongmen dictators ruling the world today.

As in the realm of the Mahabharata, the idea of the ‘other’ remains fundamental to conflicts of all kinds today. Arjuna says: I see omens of chaos, Krishna, I see no good in killing my kinsmen in battle. Chopra asks that we extend the notion of kinship beyond our family, community, religion, region and nation state to all of humankind and fellow earthlings.

Chopra is a remarkable scholar, and it shows. Laced with astute philosophical and political commentary, his writing is marked by a fluidity of thought and words. But the strength of his rigorous intellectual stamina can sometimes undermine itself. The book covers a terrain so large and deep that in some parts, the academic in him overrides the writer, making the text too dense for the wider public. This, however, is a blip that can easily be overcome by engaging with the book in a more focused way than usual.

Chopra urges us to read the Gita “against itself” and to critique its limited universalism in endorsing caste and gender hierarchies, which fly in the face of modern-day values of equality, rights and justice. In doing so, the hope is that we will reject them from our lives. Above all, he says, this activity might be a fitting riposte to the Hindutva claim that they are the sole guardians and interpreters of Hinduism and Indian culture.