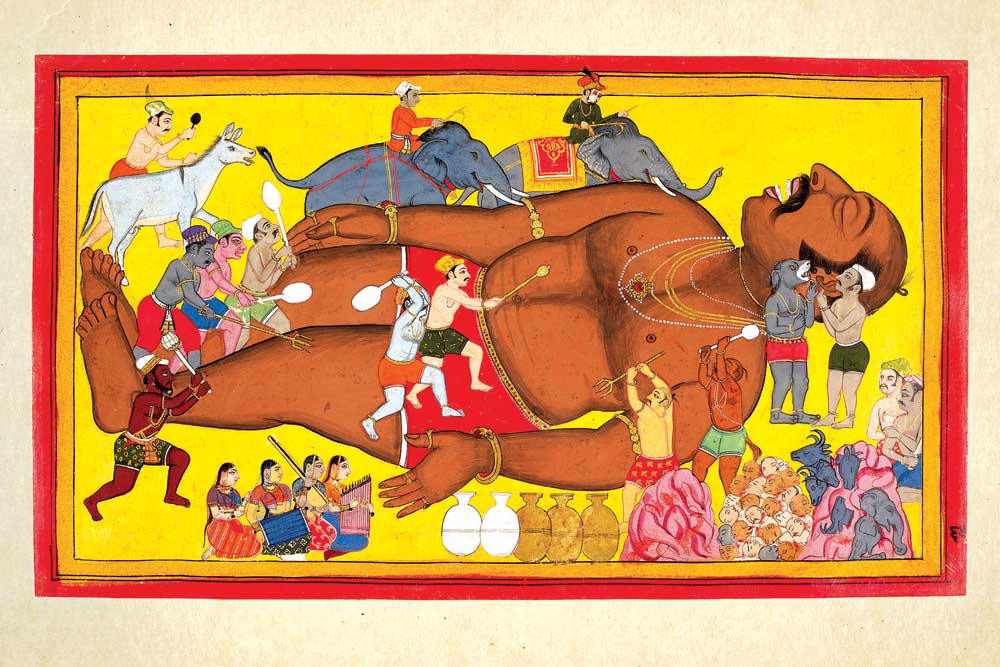 IN THIS SENSE, no text is original, yet no telling is a mere retelling—and the story has no closure, although it may be enclosed in a text. In India and in Southeast Asia, no one ever reads the Ramayana or the Mahabharata for the first time. The stories are there, ‘always already’.

One is reminded of these words from Three Hundred Ramayanas by AK Ramanujan when one walks into Bikaner House, which is hosting an exhibition on the Mewar Ramayana described as ‘one of the greatest achievements of Indian art’. Adjectives fail these paintings. To call them ‘glorious’ and ‘dramatic’ would reduce them to artefacts on the wall. The colours are lush and the detailing exquisite. But there is so much more here than mere prettiness and splendour. Like a palimpsest, they conjure the Ramayana, but also document the period they were created in. More importantly, they allow a viewer to create her own narrative of dharma and karuna. What is one’s duty to the ‘king’, to the state, to one’s family and to the self? Does one follow one’s duty, irrespective of whether it is good or bad? How does honour differ from heroism? Is separation the kernel of every human relationship? Are departures the only certainty? By raising these philosophical questions, the Mewar Ramayana rises above the aesthetics of art to become the stuff of life.

Today the Mewar Ramayana is also available to us by Roli Books (328 pages; Rs 2,975; limited edition Rs 15,000) in a majestic volume with an introduction by JP Losty (author and former curator- in-charge of the Indian visual collections in the British Library in London) and retold by Sumedha Verma Ojha.

The seven illustrated volumes of the original Mewar Ramayan were commissioned by Maharana Jagat Singh in 1649, the ruler of Mewar at that time. Little is known about the principal artist Sahib Din apparently a Muslim who determined the direction of art in Mewar. The text was provided by Hirananda, a Jain scribe who used traditional Jain scribal elements. The text is written on large thick sheets of paper which have been burnished.

Author, speaker and columnist on ancient India and the epics, Ojha says, “The paintings were a great draw but for the reader of ancient Sanskrit texts that I am, the text was an even greater attraction. The Rana of Mewar had the Valmiki Ramayan illustrated; and this Ramayan is the adi kavya, the shrot or source of all the Ram Kathas that follow. Its importance can hardly be exaggerated.”

The volumes are illustrated by artists Sahib Din and Manohar and their studios, and an unknown master in a mixed Mewar-Deccani style

In the ‘Curator’s Perspective: accessing the Mewar Ramamyana’ JP Losty writes, ‘In 1971, when I told those of my colleagues who were interested in Persian and Indian painting about these great volumes, my excitement was greeted with some indifference: they knew of their existence of course, but Rajput paintings and manuscripts did not conform to Mughal standards of painting, let alone Persian. The volumes turned out to be illustrated in three different styles of contemporary Mewar painting, involving the artists Sahib Din and Manohar and their studios and an unknown master working in a mixed Mewar-Deccani style. Since that, to me, momentous discovery in 1971, I have been occupied with trying to publish these volumes and to place them within their artistic and cultural contexts.’ Thanks to Losty’s efforts, the digital version of the Mewar Ramayana (paintings and text) was made available in March 2014.

To study the paintings at the exhibition and in the book is to witness one more telling of the epic. This illustrated Ramayana (with over 400 paintings) reveals both the glories of the tale and the socio-political clime of Udaipur in the 17th century. The artists recreated the ancient epic by depicting it in their contemporary world in terms of costume and architecture, foods and forests. Men wear the jama (a coat extending to the knee), a pyjama and turbans. Those of a lesser status wear dhotis. And the women are seen in colourful ghagras, cholis and orhnis, outfits that dominate the rural desert landscape even today.

Most of the folios measuring 23 by 29 cm, and are packed with details. Often many different stages of drama occur within a single frame. Rajput paintings differed from their contemporary European or Mughal art. They employ bright hues, multiple viewpoints, simultaneous narratives, and emotion is revealed through gesture.

In a most eloquent folio of a forest scene, for example, the action moves in an anti-clockwise manner from top left. The painting shows a typical forest landscape—a river graces the bottom, trees sprout from the foreground and purpled rocks scale up the background. In this painting, Bharata leads his family, the entire court and army of Ayodhya into the forest to bring back Rama. With the help of Rishi Bhardwaj they find the exiles at Chitrakoot. Rama embraces his brothers Bharata and Satrughna. Bharata tells Rama of the death of their father Dasaratha. Rama faints on hearing this. They go down to the river to perform the last rites. They return up the hill and quietly grieve outside the hut. Bharata requests Rama to return as the King of Ayodhya, but he refuses to dishonour his father’s memory by doing that.

In a single frame, we are given so much action, yet each sequence holds its own. It is a painting deep in pathos that gives its characters the space to mourn individually yet offer solace to the other. The painting shows the artist’s deep knowledge and personal interpretation of the epic.

The rulers of Mewar, the Sesodiya Rajputs, claimed descent from the Sun and counted Rama as an ancestor. The Ramayana was akin to a family history

Author and professor of Indian and South Asian Art at Columbia University, Vidya Dehejia has also extensively studied the manuscripts. In The Treatment of Narrative in Jagat Singh’s Ramayana: A Preliminary Study, she writes that the ‘extent to which the artists, particularly Sahib Din, followed the details narrated in Valmiki’s text is remarkable… Sahib Din was not merely aware of the story line, but was conversant with textual particulars that were relatively inconsequential to the story line.’

BOOKS ONE, TWO, four, six and seven of the Mewar Ramayana are housed at the British Library but were given scant attention till they were unearthed in the early 70s by Losty, who was then a young Sanskritist from Oxford. He discovered one volume was at the then Prince of Wales Museum in Bombay and that book three, the Aranya Kanda or Forest Book, was still in Udaipur (and was subsequently moved to Rajasthan Oriental Research Institute in Jodhpur). The volumes first made their way to London rather serendipitously. And it is good they did, as it is unlikely they would have lasted in their pristine condition elsewhere. In 1818 a Colonel James Tod was appointed as the East India Company’s Agent to western Rajput states. He befriended Maharana Bhim Singh of Mewar who is known to have revived the royal painting studio. When Tod (who went on to write Annals and Antiquities of Rajas’han; Travels in Western India) was leaving Udaipur in 1820, the Maharana gifted him four volumes of the Ramayana made under Jagat Singh, and the Bala Kanda of 1712 commissioned by Sangram Singh. A few years later, in London, Tod in turn presented the five volumes to the royal bibliophile Duke of Sussex (a son of King George III) who had a significant library. Subsequently in 1844 the British Museum library (now the British Library) purchased the five volumes.

The question to be asked, of course, is why did the Rajput kings commission a work of such scale and grandeur? It would appear to be for reasons of ancestry and symbolism. The rulers of Mewar, the Sesodiya Rajputs, claimed descent from the Sun and counted Rama as an ancestor. For Maharana Jagat Singh commissioning this manuscript was akin to asking for a family history. As Losty says, for Rajputs the Ramayana hit home because of its questions of dharma and duty, heroism and chivalry. Dehejia elaborates that during the reigns of Karan Singh (1620-28) and Jagat Singh (1628-52), Mewar flourished and witnessed the construction of palaces and temples, tanks and lakes. However, the Mughals continued to pose a looming threat in the not-so-far distance. She writes, ‘Possibly, it was in anticipation of retaliation from Shah Jahan that the Rana commissioned his grandiose Ramayana, setting up a Rama-Mewar versus Ravana-Mughal metaphor, and attempting to provide a psychological buffer to the Mughal threat.’

Today when one looks at these works, a viewer can create her own metaphors about the battles within and outside. The story is always already.

(The Mewar Ramayana is on display at Bikaner House, Delhi, till November 13th)