Along the White Clouds

The eternity of Himalayan pursuits 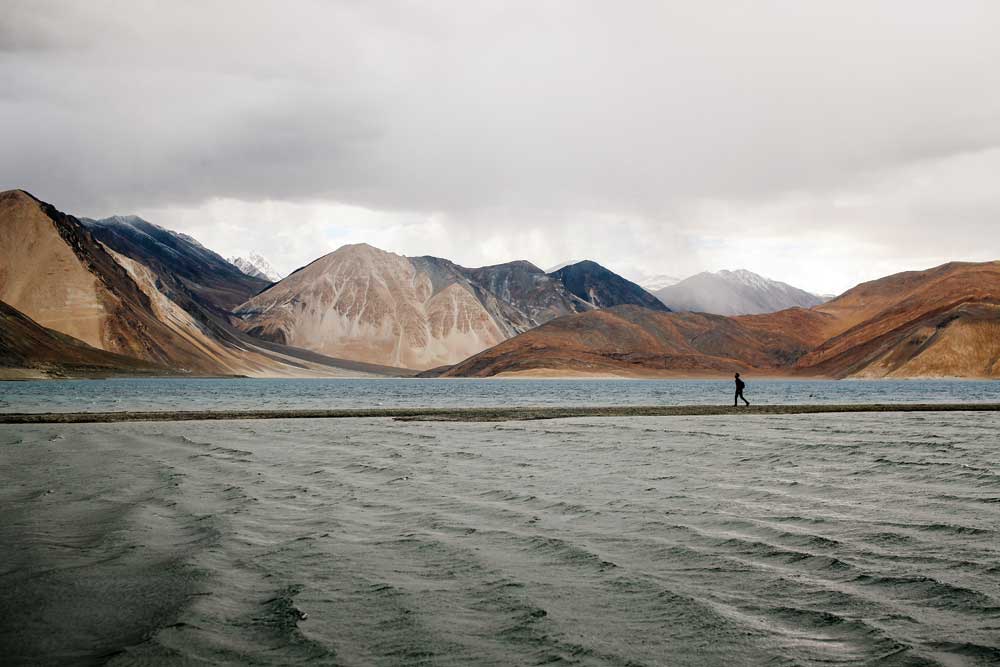 ‘WE NEVER GROW tired of each other, the mountain and I.’

I speak not for the mountain, as Chinese poet Li T’ai Po did, but Jawaharlal Nehru’s response so echoes mine: ‘I cannot say that I never grew weary, even of the mountain; but that was a rare experience, and, as a rule, I found great comfort in its proximity. Its imperturbability mocked at my varying humours and soothed my fevered mind.’

I can count the decades of my life on a rosary of the Himalayas—childhood summers on the Dal lake and in Gulmarg; a family pilgrimage to Kedarnath, which shaped my views on ritual and religion; my first adult trek; a treacherous expedition from Spiti to Ladakh; the heady romance of early marriage in our stone cottage in Kumaon; safari-style treks, with shower stalls and espresso coffee, when my love affair with remote valleys accommodated middle-aged definitions of comfort; and this summer’s walk with my son to the base camp of his first Himalayan summit.

My imagining of my life was shaped by an ever-expanding library of Himalayan writing—by Peter Matthiessen and Andrew Harvey; by Paul Brunton and Jim Corbett; by Lama Anagarika Govinda, and Heinrich Harrer, all represented in this delectable anthology. Each devotee of the Himalaya must find his path between the bookends of adventure and contemplation, so wonderfully phrased by Brunton: ‘In a multitude of places upon this sorry planet, a multitude of men are running hither and thither or jumping this way and that, in an endeavour to develop a more athletic body by such constant activities. I, on the contrary, am pinning this body down to a dead stop, in an endeavour to free myself from all intimations of physical sensation.’

Everest, inevitably, is the flagship of the ‘Adventure’ section, with familiar writing by George Mallory and by Edmund Hillary, who refused to tell the world who stepped on Everest’s summit first— he, or Tenzing Norgay; 43 years later, Norgay’s son, Jamling, summited Everest, and his lucid writing is as much a celebration of climbing as a history of climbing between his father’s time and his.

Then, attempting Everest in 1953, ‘my father was fully mindful that at that time, eighteen had died, and none had made it.’ Now, ‘I have taken dubious solace myself in the thought that, for every person who has died on Everest, five have made the summit.’

Ironically, that climbing season, 1996, was one of the most disastrous on Everest. Jon Krakauer, not represented here, tells the story of that fateful long day and night in one of the most successful pieces of mountain writing, Into Thin Air, a tragic tale of commercialisation, expediency, and bad decision-making.

An eccentric counterpoint is the misadventure of the occultist Aleister Crowley, who cobbled together a motley crew in the first-ever attempt on Kangchenjunga. His ‘coolies’ possessed ‘no notion of self-respect, no loyalty, no honesty and no courage.’ Of his team doctor, he wrote, ‘I should have broken his leg with an axe, but I was too young to take such a responsibility.’ To supervise bandobast, he recruited the manager of a Darjeeling hotel, an Italian named Righi, whose character ‘was mean and suspicious and his sense of inferiority to white men manifested itself as a mixture of servility and insolence to them, and of swaggering and bullying to the natives’. And to remove any doubts about his political correctness, Crowley wrote that women ‘are nothing but children grown up.’

Another Himalayan adventure is recounted by Mark Twain, who journeyed 35 miles of rail track down from Darjeeling in a pilot car that hugged the ground and swooped down the hill. In his telling, it sounds like the longest roller coaster ride on earth, beginning with ‘a gaspy shock that took my breath away… it was a sudden and immense exaltation, a mixed ecstasy of deadly fright and unimaginable joy’. A few miles down the mountain, Twain’s party stopped to view a Tibetan drama performance, which he describes in the finest Orientalist tradition of his time: ‘as a drama, this ancient historical work was defective, I thought, but as a wild and barbarous spectacle, the representation was beyond reproach’.

Remote Himalayan regions always inspired the search for the exotic. German-born Lama Anagarika Govinda’s The Way of White Clouds is one of the classics, and the passage I remember most acutely reads, ‘unwittingly and under the stress of circumstance and acute danger I had become a lung-gompa, a trance walker, who, oblivious of all obstacles and fatigue, moves on towards his contemplated aim, hardly touching the ground, which might give a distant observer the impression that the lung-gompa was borne by the air (lung), merely skimming the surface of the earth.’ The present Himalaya anthology has a metaphysical piece from the Lama’s book, on the ‘Nature of the Highlands’; a deep encounter with mysticism is provided by a contemporary piece, ‘Shamans in Nepal’. Wolfgang Büscher describes his recovery from deep exhaustion aided by the presence of a shaman. Without comment, he offers the explanation of his porters, ‘You saw Shiva—he was the black figure. You were afraid to see him uncovered, and at the same time, you wanted to. That is how it is with men and gods. We want to be close to them, and yet we are afraid of them, and rightly so.’

THERE’S ‘ADVENTURE’, ‘Meditation’, and finally ‘Life’, the third section of the book, which rightly features many more writers from our Subcontinent than the earlier segments. But none from Pakistan. Except for a fleeting mention in Amitava Ghosh’s reportage on the Siachen glacier, it’s as if the Himalayas abruptly ended at our western Line of Control. Whether it’s Mount K2, or the Hunza valley, our neighbour has iconic Himalayan regions, and their omission from this anthology is striking.

My favourite piece in this section evocatively links the life of sherpas with the threat of death. Sixty years of mountaineering stories have glamourised her tribe, of which Jemima Sherpa writes, ‘Everyone loves us, everyone trusts us, and everyone wants their own collectable one of us. Internet listicles call us badass.’ Inevitably, though, the news carries ‘the body counts, four, no six, no ten.’ The following year, when families meet in the Khumbu, ‘in each line, there will be gaps, like missing teeth.’ And the young will have to shuffle forward, ‘a little closer to the fire to fill the spaces of the ones that are missing.’

Death comes suddenly in the mountains, and two recent disasters remind us of the scale of Himalayan disaster. Writing of the 2015 Nepal earthquake, Rabi Thapa quotes a hydropower researcher, Austin Lord ‘I looked up the valley where you could see Langtang village, and there was just a wall of snow. It was insane. I was standing there with Dhindu, and everyone was saying ‘sabai gayo’, which means, it’s all gone.’

Two years earlier, I was transfixed by the horror of my television screen relaying images of riverine wrath from Kedarnath. Hridayesh Joshi’s writing is bland in the translation, but this quote from a temple priest is telling: “It was as though Yamraj was actually in our midst…. Within minutes, Kedarnath was filled with water, and dotted with large boulders… To save myself, I had to jump into the swirling waters below and was swept away… miraculously, the water deposited me on the side, and I lay there, for a long time.”