Alain de Botton returns to fiction and redeems love from romance. The philosopher novelist in conversation with Nandini Nair 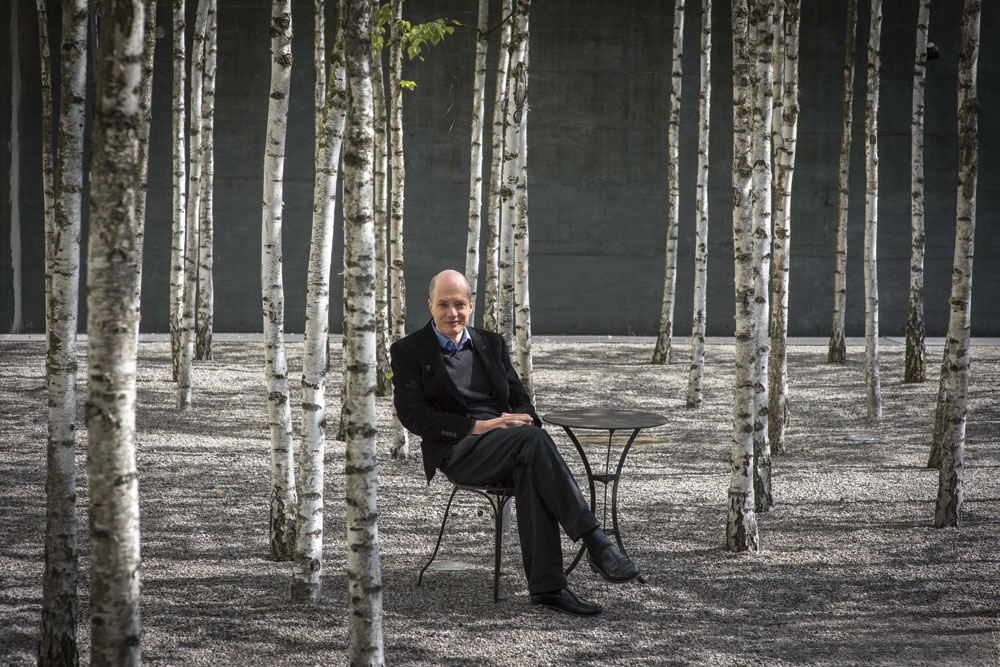 ‘X AND Y SITTING in a tree. K-I-S-S-I-N-G. First comes love, then comes marriage. Then comes a baby in a baby carriage.’ The ditties in school, Mother Goose’s tales and the movies of adolescence, they all reinforce the same sequence of events and an identical Romantic narrative arc. There really is no variation in this scheme of things. Why isn’t there a nursery rhyme that tells us about the sleeplessness of parenthood and the travails of partnerships? With The Course of Love (Hamish Hamilton; 222 pages; Rs 599), Alain de Botton helpfully addresses this absence of information by taking us into the world of post marriage and post child.

Let’s say upfront that this is not a work of great literature. Lines of beauty don’t leap up and metaphors don’t crack open the surface all of a sudden. This book is more banana bread than crème brûlée, offering nourishment not elation. It is a bit like parental advice: it appears too obvious initially, you are even tempted to brush it aside, but it is finally what you turn to. Despite yourself.

You will find yourself reaching out to underline a sentence or two at the start, and then entire paragraphs later on. You’ll quote sentences to impress at tea parties, you’ll bandy De Botton’s insights to lovers who don’t listen, partners out of sync and spouses in a sulk.

De Botton has numerous titles to his credit. The sheer range of his themes is staggering. At 23, he published his first novel titled Essays in Love (1993). This novel is its sequel. In 2012 he wrote the slim but effective How to Think More About Sex. The title of the book might hint at a limited scope, but its contents unpack sex rather than merely promote the act itself. He writes, ‘Without sex, we would be dangerously invulnerable. We might believe we were not ridiculous. We wouldn’t know rejection and humiliation so intimately. We could age respectably, get used to our privileges and think we understood what was going on. We might disappear into numbers and words alone. It is sex that creates a necessary havoc in the ordinary hierarchies of power, status, money and intelligence.’

Today the Zurich-born, London-based philosopher is known as much for his quotable quotes (Sample from The Course of Love; ‘Marriage: a deeply peculiar and ultimately unkind thing to inflict on anyone one claims to care for’) that can be the literature of Post-its and fridge magnets, as for his serious excavations of human behaviour and motivations. At the age of 46, De Botton is one of the favourite philosophers of the proletariat and remarkably well equipped to pick apart relationships, unearth thought processes and tell us what we think and why.

Romanticism has been a disaster for love. It has had a devastating impact on the ability of people to lead successful
emotional lives

The Course of Love is essentially De Botton’s treatise against Romanticism and the ideas of love that it has implanted in society. The novel, set in Scotland, which cartographs the relationship of a Scottish wife Kirsten and a Middle Eastern husband Rabih, shows the limitations of an ideology that emerged from Europe in the mid-18th century and went on to determine how the world understood ‘courtship’, ‘love’ and ‘relationships’.

In an email interview, the Swiss philosopher says, ‘We can at this point state boldly: Romanticism has been a disaster for love. It is an intellectual and spiritual movement which has had a devastating impact on the ability of ordinary people to lead successful emotional lives. Our strongest cultural voices have—to our huge cost—set us up with the wrong expectations. We deserve sympathy. We’re surrounded by a culture that offers a well-meaning but fatally skewed ideal of how relationships might function. We’re trying to apply a very unhelpful script to a hugely tricky task.’

The script that Romanticism mandates and which every cultural trope reinforces is that to be ‘normal’, the following steps are meant to happen:

• We meet a person of extraordinary inner and outer beauty; the attraction is immediate and mutual

• The sex is satisfying from the start to forever

• We are never attracted to anyone else

• We understand each other intuitively and spend all our time together

• We raise a family without a loss of sexual or emotional intensity.

De Botton believes in a view that is far more down to earth, even prosaic. He wishes to piece together a ‘post-Romantic theory of couples.’ He explains, ‘The idea of being post-Romantic shouldn’t imply cynicism. Rather we need to replace the Romantic template with a psychologically-mature vision of love we might call Classical.’

He adds, ‘Knowing the history of Romanticism should be consoling—because it suggests that quite a lot of the troubles we have with relationships don’t stem (as we normally, guiltily end up thinking) from our ineptitude, our own inadequacy or our own regrettable choice of partners. Knowing the history invites another more useful idea; we alone are not to blame, we were set an incredibly hard task by our culture, which then had the temerity to present it as easy.’

The Course of Love shows us this Classical view. A few weeks after moving into their new apartment, Rabih and Kirsten head to Ikea to buy glasses. After 20 minutes, they are unable to reach an agreement. They finally leave the shop without making a purchase. The next battle occurs over the ideal temperature for a bedroom and what time to leave home for a dinner appointment. For millions of couples, these tensions are all too easily identifiable. As De Botton writes in the novel, ‘The two parties just hope the problems—so boring to them both—will simply go away.’ But they don’t.

For this philosopher, individuals and couples alike would be better off if our vision of love reminded couples that discussing the desired location of towels (hung up, or left on the floor) for two hours is ‘neither trivial nor unserious’. And that it is ‘normal that love and sex may not always belong together.’

The other effective attitudes that he lists in the email and which he reveals subtly in the book include:

• Discussing money early on and honestly, is not a betrayal of love

• We will never find everything we want in one person

• Effort needs to be made to understand one’s partner.

Explaining the novel, De Botton adds, ‘The drama of the novel pivots around the struggle between the culture of Romanticism and the culture of a more mature, evolved philosophy.’

De Botton has been on a mission to make people lead more successful emotional lives. In 2008, he set up The School of Life in London to ‘develop emotional intelligence through the help of culture.’ A YouTube video on the school reasserts that an odd silence prevails in education when it comes to the truly big questions—such as relationships, money, illness and mortality. The School of Life tries to answer some of these with the help of classes, therapy, books and videos. Videos such as ‘The Meaning of Life—in 60 Seconds’ might sound rather preposterous to some, but others might find echoes of their own life in the five- minute long clips on the reasons to remain single or explanations for the sex-starved relationship.

For De Botton, The School of Life which has ten hubs across the world and a million YouTube subscribers, is simply an attempt to make ‘anger, confusion and loneliness a little less likely.’ He wishes to spread self-knowledge, because the more self-knowledge we have, the less likely we are to blow up our lives and those around us. He says, ‘We sometimes associate therapy with something for people in New York with too much time on their hands. Far from it, it is an ancient attempt to grasp some of what is going on inside our souls.’

To spread his ideas, De Botton believes in a process called Cultural Mining. He says that this is a way by which the most valuable parts of our culture—arts, humanities, philosophy— are recovered and made useful for our own times. For him, a persistent problem is that cultural insights have remained below ground and available only to those with ‘access’. Culture has to be made appealing and relevant so that it can help us solve the confusions and anxieties of our times.

De Botton wishes to dispel dangerous notions such as ‘love is an enthusiasm.’ With his books and writings, he becomes the voice in our head that tells us ‘love is a skill to be learnt’. He spells out ‘marriage is to lock ourselves up willingly, because we don’t trust our own impulses.’ But he asserts repeatedly that while ‘for the last 50 years, the burden of intelligent effort has been on attempting to make separation easier, the challenge now lies in another direction: in trying to remind ourselves why immediate flight doesn’t always make sense…’

That is what the characters Rabih and Kisten remind us in The Course of Love. Sticking together can be a courageous act and even mediocre everyday lives can be heroic in their own way.