A Rotten but Not Entirely Unlikeable Man

A corrupt underling is as crooked as the system he works in, but Bagchi’s quiet, masterly prose leaves you with sympathy for his morally bankrupt protagonist 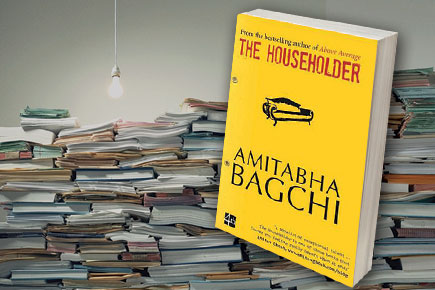 A corrupt underling is as crooked as the system he works in, but Bagchi’s quiet, masterly prose leaves you with sympathy for his morally bankrupt protagonist


Amitabha Bagchi’s second novel, The Householder, is a delight. And a welcome breath of fresh air in a literary atmosphere clouded with stylish feints and clogged with pretentious storytelling. This appears to be a simple story told in simple, elegant prose that rarely draws attention to itself. Until you finish the book, that is. And realise that neither was the story simple nor the prose unremarkable.

Already compared with Upamanyu Chatterjee’s English, August (though I’d have thought his Mammaries of the Welfare State was more appropriate), Bagchi’s novel is set in the corridors of Delhi’s bureaucratic and political universe, a netherworld where anything can be fixed and unfixed, provided the price is right. Coming on the heels of such flamboyance as The White Tiger and the quieter but far more deadly Beyond the Beautiful Forevers, The Householder also turns its sights onto the degraded space inside India Shining, where the complete absence of personal ethics goes hand in hand with rampant corruption. Actually, the image that comes more strongly to mind is that of a serpent consuming its own tail—a seamless continuum between the private and public spheres where the decay of one implies the corrosion of the other and vice versa.

Naresh, the middle-aged protagonist, is assistant to a corrupt IAS officer—a position that suits him well, for he is neither a man of great ambition nor of abundant talent. He is able to feed off the graft his boss commands and secure basic comforts for his family. Things are humming along: a favour received here, a phone call made there, a file shelved, another brought forward.

But even in a system as well-oiled as this, danger lurks. It appears one morning in the shape of an inquiry that leads to Naresh being suspended from his job. Trouble is brewing on the domestic front as well—Naresh’s daughter is having trouble getting pregnant which gives her mother-in-law the opportunity to harass her emotionally, his son’s apparently innocuous (and socially embarrassing) call centre job is beginning to seem rather sinister. The life that Naresh had worked so hard to insulate from any turbulence is suddenly turning stormy. Accustomed to calming such day-to-day disturbances with a well-placed phone call or visit, Naresh watches helplessly as his powers slowly evaporate. It turns out that even his children don’t need his protection anymore, having found their own solutions to their problems. Naresh’s grihasthashrama, his life as a householder, is over and vanvas beckons in the form of a sinecure in the far Northeast.

Bagchi writes with a studied neutrality: one never has the sense that he is judging Naresh. Which leaves the reader in the odd position of relinquishing his/her own need to be critical of Naresh. In fact, you end up feeling sort of sorry for a man, well past his prime, facing his own redundancy and irrelevance. One of the most exquisite passages in the book is about Naresh trying to fill his empty hours in a home and with a family that is unused to his presence during the day.

It is Bagchi’s control over the authorial voice that makes The Householder deceptive in its apparent simplicity. Apart from the skill by which he is able to generate sympathy for an utterly mediocre and morally bankrupt protagonist, Bagchi normalises corruption with his quiet prose, takes away the shock we should feel about a system that is rotten to the core. Naresh is an every-man, or rather, an every-government-man, we expect to meet when we encounter the State. The power of this book lies in showing us how unremarkable corruption and the corrupt have become in India. Bagchi paints this picture without resorting to satire or patronising mockery or through lurid descriptions of sordid crimes and garden-variety misdemeanours. There is no other world but this. A shadowy counterpoint, Naresh’s honest and incorruptible friend, is long deceased and Naresh’s attachment to his widow is less than honourable. The Householder is a masterful piece of writing because it manages to hold cynicism and righteous anger at bay. By doing so, it reveals the truly tragic proportions of contemporary India.