How land meant for farmers displaced by Partition later housed the rich and powerful of Delhi, one of them being Indira Gandhi. 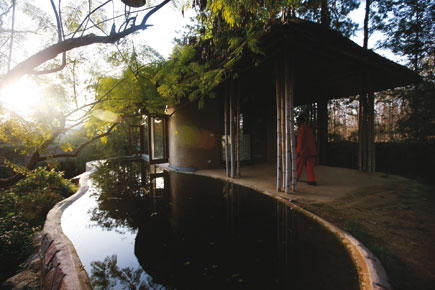 How land meant for farmers displaced by Partition later housed the rich and powerful of Delhi, one of them being Indira Gandhi.


One morning in February 1948, we had a visitor to the Kingsway Camp who would set the course of my life for the next two decades. Kamaladevi Chattopadhyaya came to see us, in the wake of Nehru’s visit. At that time she was a well known Congress-Socialist , part of  a galaxy of names like Acharya Narendra Dev, Jayaprakash Narain, Ram Manohar Lohia and Yusuf Meherali… She praised the relief work in the camp, but asked, what is their future?… Three days later, I got a phone call; that I was to attend a meeting Kamaladevi had called…

Present at the gathering… were several Congress Socialists including Achyut Patwardhan , the firebrand  from Pune  and  R Venkataraman, at that time an MP from Tamil Nadu, later to become President of India.  After hours of deliberation it was decided that the refugees alone could build their own future primarily through self-help.  What they needed was enabling conditions and a helping hand where necessary.

We took the road with the cheerful assumption of setting in motion a process for building a new India, through efforts outside the State, though along with it. We had of course little knowledge of the ground realities of setting up a cooperative. Soon the beams of the roof started collapsing on our head day by day : cooperative law, rules, registrars, the cooperative department, the inspectors, cooperative credit.

But that would come later. The first step soon after the meeting in Hardinge Avenue  was : how would be begin?    Kamaladevi said, “…Let us carry out a survey at the Kingsway Camp, seeking the opinion of each household about what they would like to do.”… Within four days, 600 families were surveyed. A large number of the refugees were agricultural labourers.  They wanted  land  so that they could start  cultivation… A group of refugees with volunteers from the newly-formed ICU was sent to search for land near Delhi left behind by Muslims who had migrated to Pakistan which might be available to refugee cultivators.  They found that some 6,000 acres of land was available in the villages near Mehrauli,  near the Qutab Minar. But to our horror, it was discovered that that land in large measure had already been  allotted by senior officials in government  to themselves: Sir Datar Singh, an Adviser in the Ministry of Agriculture was allotted 3,000 acres, MS Randhawa who was Deputy Commissioner of Delhi had been allotted 600 acres , MS Sahni, from Sind who was Principal of the Law College in the Delhi University had been allotted 1200 acres… Kamaladevi concluded that political pressure would be necessary. For this she proposed two steps, one, let the refugee agriculture labour move out of the camp and occupy the land in Mehrauli. Two, to convene an all party political convention… They (the agricultural refugees) got ready to go.  The camp arranged transport. Early one morning, they left in a convoy of trucks,  occupied the evacuee land, in and around the village of Chhattarpur in Mehrauli.

When the landowners came to know, they immediately approached the official machinery to get the refugees evicted. Their logic was that they were also refugees,  albeit large landowners and therefore had to be compensated in kind. But the sheer size of  allotments of land to individuals seemed at odds with the prevailing philosophy.  Kamaladevi  called a convention of all the political parties… Because of her stature, almost all the parties came : Congress, the CSP, the CPI. Union minister Gulzari Lal Nanda (a labour leader) came from the Congress… About 200 persons attended.  The question Kamaladevi posed to them was whether  India was going to recreate landlords, and that agricultural labour refugees  must go and work as labour on their farms ?  The convention gave a call for ‘land to the tiller’, a resolution that was passed unanimously. A copy was sent to Nehru. He was appalled at the land allotment to big landlords. He wrote to Sardar Patel, expressing great surprise… and asking for an enquiry. ‘Someone told me,’ he wrote, ‘that this was done in exchange for land in Pakistan. This does not seem to be sufficient justification. When land is so scarce and so many unfortunate people need it, it seems unfair that large slices of it be given to our officials.’

After a prolonged campaign, which included much back and forth with the bureaucracy, including several attempts by them to run down the ICU, the Government finally agreed to withdraw the allotment of land to the landlords and allot it to the refugees…

Now came the challenge of alloting the land… They were about 600 families mainly from Bahawalpur and neighbouring areas of West Punjab. … We turned to the group leaders, each the headman of the villages they had left behind…   We clarified that it (the land) will not be given to each individual; it will be given to your cooperative.  …

But our plan suffered a mortal blow: the authorities refused to allot the land to the cooperative societies. They would only agree to allot land to each  individual member… they began a campaign among the cultivators that they were willing to give land to individual families, but the ICU was opposed to this and insisted the land be given to the cooperatives… But gradually some of the individual members were weaned away and brick by brick the wall  of unity collapsed.

For about a year, before the damage could be done, the experiment worked fairly well. We experimented with joint farming. All the labour was pooled and assigned different field operations treating the entire land as one unit.  Some outside functions like procuring inputs: seeds, fertilisers or visiting government offices, banks and so on was done collectively…

…the official resistance we faced was all the more striking given  Nehru’s personal interest in our work, an interest that stemmed from the presence of Kamaladevi, and from his deep interest in  the success of self-help models… Gopi Krishna, our chief organiser has  a somewhat lighter account of Nehru’s personal interest in our project. He recalls taking a truckload of farmers with samples of vegetables they had grown to show to Nehru. Kamaladevi had called Teen Murti House in advance of their arrival. They arrived straight from the field, mud-caked, and were shown into the sitting room. Nehru was apparently impressed… calling out to Indira to come and see  “what the Chattarpur people have grown”, even sampling a large mooli with relish!

I had to leave Chattarpur after a year. Not because of the growing official interference, but because refugees from the Frontier region demanded our attention. The ICU stayed on in Mehrauli for another year. The refugee farmers remained there for about two decades.  But by the 70s, the farmhouse phenomena had  escalated in Delhi.  The small farmers were offered huge amounts of money to sell to big real estate operators who… sold to  rich non-agriculturists in Delhi for building large farmhouses. And since the land had been allotted individually to cooperative members it was easier to sell it off… If land had been allotted as one unit to a cooperative the farmers and ICU had proposed, it might have been different story. Instead, one of the first experiments of cooperative farming in independent India became the playground of  Delhi’s big shots.

Interestingly, at the AICC session in Nagpur in 1957, the Congress passed a resolution to   introduce cooperative farming throughout the country, on the Chinese model… So the  ICU thought we could share our experience. We quickly brought out a study on cooperative farming based on three case studies of our experiences in Chhattarpur… Indira Gandhi, who by then was Congress President, met us, and said it was a good idea. But nothing came of it. As it turned out, Indira Gandhi was amongst those who bought a farmhouse in Chhattarpur.