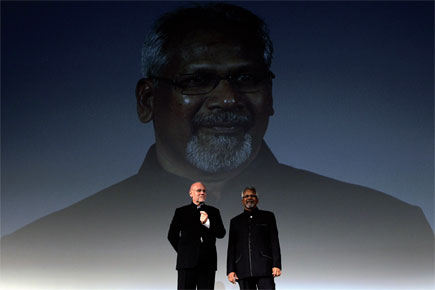 
Even by Bollywood’s standards, the late 1980s and early 1990s were a low point. Barring stray exceptions, every movie was a quagmire of cliché and pedestrian melodrama. There was a vacancy in the superstar department. Amitabh Bachchan was scraping the bottom with films like Toofan and Jaadugar. Decent directors like Mahesh Bhatt gave up and lifted plots from Hollywood classics. Movies had names like Doodh Ka Karz and Paap Ki Kamaee and they were not spoofs. In such a creative desert, Mani Ratnam’s cult spread over India, even though he was still making regional movies in the South. He was then what has now become a genre in Bollywood with filmmakers like Anurag Kashyap and Dibakar Banerjee—the auteur talking to the mainstream.

Film critic Baradwaj Rangan’s book offers a fine insight into how a filmmaker walks that line. The format is conversational, keeping the writer in the background. Which is perhaps just as well. In India, mainly due to the problem of getting access, biographies of film personalities end up as hagiographies. In Rangan’s introduction, he does not hide his admiration of Ratnam. In the conversations, he mildly questions and criticises his subject. Ratnam, in turn, is voluble. There is an unmistakable honesty to him. It helps that they are only talking filmmaking. Rangan does not delve into the personal, and, therefore, there is really no cause for evasion.

The book is chaptered film-wise. The director’s first four films—Pallavi Anupallavi, Unaru, Pagal Nilavu, Idhayakoyil—are clubbed into the first chapter and from then on each subsequent movie gets a chapter each. The initial chapters are also the most interesting. When Ratnam gets into filmmaking, there is the fact that he is from a family of producers but still almost totally ignorant about it. After finishing his management degree, while waiting to take up a job, he decides to help out a friend who is shooting his first movie. And at the end of the schedule, he knows that this is what he wants to do for the rest of his life. As he says, “I can’t put a finger exactly on when I made the decision, but somehow it had been made. I wanted to direct films. That is what I wanted to do for the rest of my life.”

So he gives up on a management career, writes a script and takes it around to producers and actors. One of them is Kamal Haasan. “I told him the story and he told me five stories in return,” he says. Kamal gets his brother to take Ratnam to the director Mahendran, but it doesn’t go as planned. “He had come back (from a shoot outside Chennai) with a crate of beer, and after a brief ‘hello’ to me the two of them got talking over beer. I was forgotten.” According to Ratnam, he didn’t want to be an assistant director but if he had to, it would be with a celebrity director. Mahendran was one of the three he had shortlisted. The second director he passed the script to never read it. And the third heard him out and years later revealed that because Ratnam was speaking in English, he had not understood anything. He then decided to make the movie himself and got an uncle to produce it but the condition was that it would have to be in Kannada, a language Ratnam did not know. “I’d written the film in English. I could have translated it into any language. If they’d asked me to do it in Konkani, I wouldn’t have hesitated.”

The first half of the book is quite a riveting melange of anecdotes like these. Rangan mixes simple questions like ‘What was the first scene?’ with more complex ones which try to understand how Ratnam approaches character and plot development. Ratnam describes in great detail his own ignorance, thought process, his gradual learning, his manic necessity to not be clichéd or stale, his proclivity to experiment with everything from cinematography to music, and to make films that people would see. He describes working with a genius like Ilayaraja who would churn out tunes by the minute that he would have to catch and modify immediately before they got lost. He talks about all the movies—Mouna Ragam, Nayakan, Anjali, Roja, etcetera—that gave him cult status beyond the South. In a rare comment on another filmmaker, he speaks about how Feroze Khan completely missed the point in his remake of Nayakan.

An amusing element in these conversations is the number of times Ratnam tells Rangan that he is reading meanings where none exists. Looking for subtexts and interpretations that the director had no inkling of while making the film. Consider these passages that appear at different points in the book.

‘Rangan: When you wrote Raavan, in the scene where Raagini unwittingly leads Dev and his troops to Beera, did you think back to this scene [in Nayakan] where Velu leads the cops to his father?

Ratnam: Not till you brought it up.’

‘Rangan: You are saying that the film [Iruvar], in some ways, is less a biography than an autobiography. The theme came about from your hero-worshipping these real-life people.

Ratnam: You are putting words into my mouth. If I meant I hero-worshipped these people, I would have said so…’

‘Rangan: I can’t help noticing that you’ve been clutching a bunch of pencils through this entire session.

Ratnam: Are you trying to find meaning in the pencils too?…Well, I write with pencils.’

The book gets monotonous and academic in the second half when it comes to the later movies of Ratnam. The anecdotes get sparser as Rangan gets obsessed with deconstructing and analysing scenes and songs threadbare. The life stories are not there any longer. A series of explorations on character sketches might be of interest to students of filmmaking but the average reader is likely to zone out.

But there are still interesting nuggets that spring up. Like a question on intervals in Indian cinema. It does not exist in the West. Ratnam says he loves it and explains how it is good because of the length of Indian movies. It gives the audience time to collect what has happened so far. In one question, Rangan points out that some scenes in the Hindi version of Yuva are missing, and Ratnam says that’s because Tamilians speak briskly. Dialogues translated into Hindi take longer to speak and leads to a few more minutes. So he had to cut down on scenes to fit the movie into the same time.

Conversations With Mani Ratnam is not a critique of his work or life. But for anyone interested in films and filmmaking, it offers a microscope into the mind of one of the great filmmakers India has ever produced. It is recommended reading.