Why is China Afraid of Him?

The 14th Dalai Lama is ageing, and a succession tussle could set off another crisis in Indo-Chinese relations. The signs are already evident. 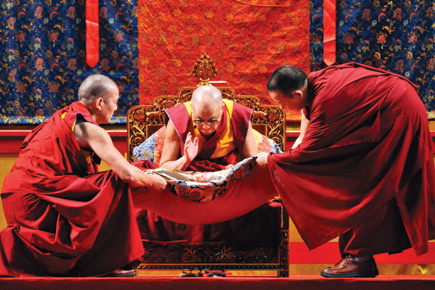 The Dalai Lama is ageing, and a succession tussle could set off another crisis in Indo-Chinese relations.


The Dalai Lama has been to Arunachal Pradesh five times in the past. Why, then, is China making it an issue now? There may be more to Beijing’s shadow-boxing on Arunachal than just a border dispute and Chinese claims on Tawang, a town near the Indo-Tibetan border. China’s opposition to the Dalai Lama’s proposed visit to Tawang may have a lot to do with the impending controversy over the Dalai Lama’s successor. The exiled leader of Tibetan Buddhists is now 74, and although in good health, he has been hospitalised thrice over the last year.

China outlaws and invalidates reincarnations of ‘living Buddhas’ without government approval. As an example, in 2005, China appointed the so-called 11th reincarnation of the Panchen Lama (the Buddhist order’s second highest post), who lives in Beijing. The Dalai Lama, in exile in Dharamshala, Himachal Pradesh, appointed another, whose location is unknown. The appointments set the stage for a confrontation over the leadership and future of Tibet, which lies within the territorial borders China marks for itself.

An easy way to contain Tibetan secessionism, China seems to think, is to control the religious order. Aware of these games, the Dalai Lama has already stated that the next reincarnation would not be born in ‘occupied Tibet’. “We have our own traditional procedure for the selection of His Holiness’ reincarnation and there is no question of China appointing one for us. They can do so but he won’t have any credibility,” says Tenzin Takla, the Dalai Lama’s spokesperson.

Tawang holds symbolic value for Tibetan Buddhists since the sixth Dalai Lama was born there, which is why the current Dalai Lama’s visiting Tawang gives Beijing the shivers. “Definitely, it is the succession anxiety that is fuelling China’s belligerence on Tawang,” says TP Sreenivasan, former Indian representative to the UN. “There have been rumours for a year now that the next Dalai Lama could be from Tawang, and China is preparing ground by pressuring India in advance. That is why China is being friendly and belligerent with India at the same time,” he observes, suggesting that India could reduce tensions with its northern neighbour by endorsing the plausibility of the next Dalai Lama being someone born anywhere in the world.

Such details of birth and rebirth assume political significance for historical reasons. Specifically, the Dalai Lama traces his authority to the Gelug sect of Tibetan Buddhism, the spiritual leader of which has traditionally been the head of the Tibetan government in Lhasa. He was appointed the 14th Dalai Lama as a reincarnation of the 13th. This happened four years after the latter died, and on the authority of a regent who identified him while still a two-year-old, through such authentic omens as a preference for the toys that the 13th Dalai Lama had played with.

A regent being appointed to identify the 15th Dalai Lama could spell a period of political uncertainty for Tibetans. “The present Dalai Lama is very respected and recognised the world over. After him, China may look for more space to repress the Tibetan struggle,” says Youdun Aukatsang, a member of the exiled government’s parliament in Dharamshala.

China has always been suspicious of India’s position on Tibet. “If China’s perception is that India is interfering in the succession issue, they will definitely exert a lot of pressure on New Delhi,” says Alka Acharya, chairperson of the Chinese Studies department at Jawaharlal Nehru University, Delhi. “India definitely needs to have in place a strategy to deal with the post-Dalai Lama scenario,” she says. It will not be easy to strike a non-interference posture without letting civil Tibetan groups down. As strategic affairs expert SD Muni puts it, India’s policy should be, “Not to annoy China without appearing to be appeasing it. Not to abandon the Tibet cause without appearing to be abetting it. Neither petulance nor bravado. Neither offence nor endorsement.”

India’s best bet may be to discreetly leverage international support for Tibetans. After all, it is a cause célèbre amongst global notables such as Hollywood star Richard Gere. The complication is the escalation of political activity among young Tibetan refugees who refuse to follow the Dalai Lama’s pacifist ‘middle path’. They advocate independence rather than autonomy, and have formed organisations such as the Tibetan Youth Congress, Gu-Chu-Sum Movement of Tibet, National Democratic Party of Tibet and Students For a Free Tibet. They demand an uprising.

In March 2008, they nearly got one. In the run-up to the Beijing Olympics, Lhasa was wracked by angry Tibetan demonstrations and even mob violence—to the shock of sympathisers—against hapless Chinese and religious minorities. A movement that was seen as largely peaceful suddenly had a dangerous new ring to it. The events of 2008 also gave China an opportunity to discredit the Tibetan movement. For example, it insists that the uprising and all the violence that went with it had the tacit approval of the Dalai Lama, allegedly stirring up trouble via the Internet from the safety of Dharamshala.

Indian diplomats sense a finger pointed at India, and in future episodes, the country may well opt to do what it takes to minimise Chinese displeasure, as seen last year. “India could similarly crack down on youth NGOs and other political activity in a post-Dalai Lama phase, in the absence of a leader as tall as His Holiness,” says Shibayan Raha, a well-known Indian activist with Students for Free Tibet.

Some intellectuals say the only way to keep a lid on a succession battle ahead is to call an end to the eternally perpetuating institution of the Dalai Lama, by announcing that there would be no successor at all. The current Dalai Lama has suggested so himself, adding though that the Tibetan people should decide whether they need the institution, and is willing to hold a referendum on this. “But there is no hurry. His Holiness is hale-and-hearty and will live long,” says his spokesperson. Crucially, the idea has been ignored by China, which would want its own Dalai Lama in place. According to the 14th Dalai Lama, other options could be an election by a collegium of elders, much like the Catholic Pope is appointed, or his picking a successor himself. Done in Dharamshala, these would also unnerve China.

Time, Tibetans fear, is running out. As the Dalai Lama’s London representative Thubten Samdup was recently quoted as saying, “It’s all in preparation for the eventuality when that day comes, that unfortunate day, when the Dalai Lama dies. The day Tibetans don’t want to face, but they will. We should at least be ready.”

So should Indian diplomacy. For 50 years since the 1959 Lhasa uprising, India had adopted the middle path on Tibet. Neglect of the issue could force India off it. That won’t be good.