What in God’s Name is This?

Aasia Bibi has been sentenced to death under Pakistan’s dubious blasphemy laws. Her case could hasten the country’s slide towards a closed society. 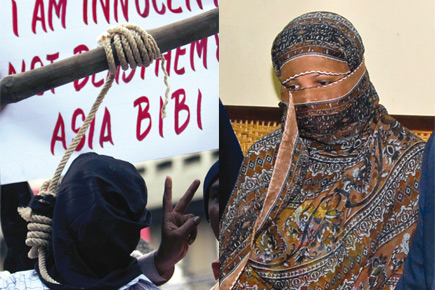 Aasia Bibi has been sentenced to death under Pakistan’s dubious blasphemy laws. Her case could hasten the country’s slide towards a closed society.


Aasia Bibi has been sentenced to death under Pakistan’s dubious blasphemy laws. Her case could hasten the country’s slide towards a closed society.

On a chilly Sunday morning at the Trinity Church, one of the oldest in Karachi, the congregation files out after the service, gaily exchanging greetings and sipping cups of tea to ward off the cold. Mention Aasia Bibi, though, and the defensive guard goes up, coupled with a sense of resignation at the state of affairs in Pakistan.

Given the rapidly slipping levels of tolerance on matters of religion, which the country’s Qaid-e-Azam MA Jinnah once said had “nothing to do with the business of the State”, the death sentence handed down to a Christian woman for alleged blasphemy should perhaps not have come as a huge shock. But Aasia Bibi’s case has more than just liberals aghast. It is a stark reminder of how Pakistan’s blasphemy laws are being grossly misinterpreted and used as a tool of persecution.

That Aasia is from a village of Nankana Sahib—the Punjabi district of origin of Sikhism’s originator, Guru Nanak Dev—only compounds the sense of loss in the region’s once-eclectic traditions of tolerance. At age 45, Aasia Noreen has been sentenced to death by a district court in Punjab for committing blasphemy. Her ‘crime’? She allegedly made blasphemous remarks against Prophet Muhammad after a fight with Muslim women labourers who refused to drink water from a vessel she had touched. These women allege that Aasia had insulted their religion and the Prophet, and a local maulvi filed a complaint against her at the local police station. A questionable investigation and judicial hop later, Aasia Bibi was awarded the death penalty, the maximum sentence stipulated by law for such blasphemy.

Pakistan’s blasphemy laws, the framework of which can be traced to British laws of pre-Partition India, took a lethal form in the 1980s, when the dictator General Zia-ul-Haq inserted clauses in the Pakistan Penal Code (Section 295-C) that made the death penalty compulsory for anyone making derogatory remarks against the Prophet. Since then, thousands of people, Muslims included, have been falsely accused of blasphemy. Worse, scores have been killed at the hands of unknown gunmen, and in some cases, at the hands of policemen who are supposed to enforce the law, not play social vigilante.
As news of Aasia Bibi’s conviction spreads, so does horror amongst those who have long decried the country’s blasphemy laws. Human rights organisations have called for an investigation into the case, and in the Vatican, the Pope himself has appealed for clemency.

At Karachi’s Trinity Church, many feel that no Christian would ever commit blasphemy in Pakistan, especially in light of the laws’ stringency. “I was very shocked that a woman was being convicted,” says Susan Mall, “Christians here are very careful when they talk about their religion.” Mariam John echoes her views: “Are these laws only for us?” Sadly, it certainly seems that way. Mall recalls an experience similar to Aasia’s: “I once asked a Muslim man for water for my thirsty son. He gave it to me in a different glass, and when I asked him why, he said it was because I was a Christian.”

The true horror, many would say, is that those appalled by the death sentence often seem to get outshouted by those who bear a palpable sense of glee. Religious parties are crying themselves indignant at the very suggestion that Aasia be pardoned, or that there be an amendment or repeal of the blasphemy laws. Public protests have been held all over Pakistan against a pardon. In an interview with CNN, Qari Salim, the maulvi who first complained about Aasia Bibi, called her sentencing one of the happiest moments of his life, adding that the news squeezed tears of joy out of him. And if that sounds bad, an imam of a Peshawar mosque has offered Rs 500,000 [about Indian Rs 265,000] to anyone who kills Aasia Bibi—an incitement to murder that was endorsed in an editorial of the Nawa-e-Waqt, a popular Urdu newspaper published from Peshawar and Quetta.

Relief has been slow in coming. Punjab Governor Salmaan Taseer made it a point to meet Aasia Bibi in Sheikhupura Jail soon after her death sentence was confirmed by the district court. In response, religious parties have loudly condemned the governor’s support for Aasia, who he has described as “a poor, illiterate woman” whose family “has been put under a lot of pressure by the local maulvi”.

Taseer has also passed on Aasia Bibi’s mercy plea to President Zardari. However, the Lahore High Court, during the proceedings of Aasia’s appeal, has passed a stay order against a presidential pardon. “The president’s power of pardon is part of the Constitution, the Lahore High Court can’t do anything,” Taseer has said, “But we want to give them time to sort this case out.”

The governor’s stance matters all the more since the province of Punjab has had a strikingly high number of blasphemy cases lately, as also incidents of violence against minorities. In August 2009, Christians were attacked by a mob in Gojra. Seven Christians were burnt alive and their homes set on fire. In May 2010, Ahmadis were targeted by suicide bombers and gunmen; attacks on Ahmadi mosques left at least 80 dead and 90 injured of a sect that was constitutionally declared ‘non-Muslim’ in Pakistan.

Punjab is ruled by the Pakistan Muslim League (Nawaz), a party that has had ties with outlawed sectarian outfits like the Sipah-e-Sahaba Pakistan, and is a harsh critic of the relatively liberal Pakistan People’s Party (PPP) that holds power in Islamabad. According to Taseer, “Law and order is a provincial subject. It is entirely within the ambit of the Punjab Government. Nearly all blasphemy cases have been registered in Punjab… in a few districts where the PML-N has a majority. It’s usually with the support of the local party and police that these kinds of cases are registered. They know very well that the local police would not register these cases if the Punjab Government doesn’t want them to.”

Aasia Bibi’s family, which has been facing threats after the court verdict, is currently in hiding. Shahbaz Bhatti, Pakistan’s federal minister for minorities, confirms that the family has cause for worry: “We have written to the provincial government to ensure their security. The interior ministry is also taking steps in this regard.” However, SK Chaudhry, Aasia’s lawyer, says Aasia’s husband has not been provided with any state security.

Bhatti says that while the religious right has a right to express its opinions, it remains unaware of the nuances of jurisprudence: “Many people are facing death threats and problems. They’re in prison and are being killed extra-judicially. This law is being misused.” According to the federal minister, President Zardari has formed a high-level committee to discuss the country’s blasphemy laws, for which names of reputed experts and scholars are being sent for approval.

Asked why it took so long for the PPP to try amending the laws, Bhatti says, “This law was introduced in 1986 and until 2010, nothing happened, so if we are taking steps in 2010 it is fine. This is a very sensitive issue.”

Sensitive is a mild way to describe the situation. On 26 November, the PPP’s Sherry Rehman, a former minister, submitted a bill in parliament proposing amendments which include a clearer definition of the term ‘blasphemy’, a reduction in punishment, and a reliable mechanism to investigate cases. In reaction, religious formations like the Jamaat-e-Islami and Jamiat-e-Ulema Pakistan, which is also part of the coalition government, have threatened Sherry Rehman with a mass siege unless she gives up her quest for reforms.

Rehman says she expected a reaction, but not to this extent. “I certainly didn’t expect a blatant open physical threat to initiate discourse and to clamp down on any kind of debate, which is my right as a parliamentarian and I’ve fought for that right.” But given the PPP’s reliance on coalition partners such as the Jamiat-e-Ulema Pakistan for its parliamentary majority, does she hold out much hope for the reforms bill being passed?
“Musharraf brought about a Women’s Protection Bill and their partners did not vote for them. The PPP [then in the opposition] voted for them across party lines,” she replies, “These are strong issues that progressive parties had stood united for, for many years as well as [supported by] many members. This is going to be a test for all those who stand for justice.”

Munawar Hasan, head of the Jamaat-e-Islami, remains firm that there is no need to change the blasphemy laws. “Why do you want a law like this to be repealed? Every law is misused in Pakistan, that doesn’t mean you change the law,” he argues, adding that the court proceedings must duly take place and be listened to with “patience”. Also, he is convinced that Sherry Rehman’s bill is not part of her party’s policy. “She doesn’t follow party discipline,” he alleges, “such a person can only be called a baaghi [rebel].”

The debate so far has only spelt dismay for the country’s minorities. “It’s not just Christians,” says Colin Wrigley, a Christian resident of Karachi, “even Muslims are being charged under the blasphemy laws. It contributes to a sense of being besieged. Christians feel that this is a constant danger.”
While proceedings for Aasia’s appeal against the verdict continue in the Lahore High Court, there are fears of the trial’s social fallout even if she is eventually let off. Jerry Joseph, a representative of a local NGO that has been assisting Aasia with legal aid since 2009, fears the family’s ostracism, or worse. “This is such an issue that it will be hard for the villagers to even forgive them. The people there were the ones who blamed her—their reaction, based on my interaction with them, will be terrible if she moves back here.”

With her family already facing threats, religious leaders baying for her blood, and hostile villagers glowering at her, Aasia will need State protection. But with Pakistan’s dismal record of ensuring the safety of minorities, Aasia’s release may just lead to an entirely new set of problems for her and her loved ones.