The Ludicrousness of ‘Taking Back Yoga’

Meera Nanda’s original essay on the origins of modern-day yoga have provoked some fairly extreme reaction. Here she joins issue with the HAF’s Swaminathan Venkataraman, and says “facts are stubborn things and have to be respected.” 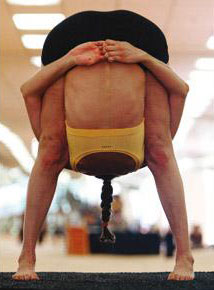 Let’s not be so touchy about yoga’s ‘Vedic-Hindu’ origins. Let’s celebrate the mongrel it is.


The Hindu American Foundation (HAF) is not pleased with my recent essay that questions its campaign to claim modern yogic asanas for the glory of ‘5000 years old’ Hindu dharma. Swaminathan Venkataraman, who sits on the board of directors of the HAF, finds faults with my not-purely-Hindu, not-all-that-ancient and not-so-spiritual history of modern yoga.

I fully understand why Venkataraman and his fellow travellers would want to discredit the alternative history of yoga that is being pieced together by well-respected historians and scholars—the history that I referred to in my essay. Indeed, they have no choice but to shoot down this history, since the entire rationale for their campaign to ‘take back yoga’ (TBY) from Americans, Europeans, Christians, Muslims, Jews and other non-Hindus rests on the assumption that Vedic or Sanskritic Hinduism is the mother (“the mother tradition,” to use the HAF’s vocabulary) of all of yoga, modern asanas included. After all, how can Hindus accuse Americans of “stealing” yogic asanas if it can be demonstrated that these same asanas have incorporated many elements of European and American physical culture, which share neither the metaphysical assumptions of Hinduism nor its goals of spiritual enlightenment? How can you take back something that wasn’t all yours to begin with? No Vedic-Hindu origin story for yoga, no TBY—it is as simple as that.

While I understand the HAF’s compulsion to stick to the myth of yoga’s immaculate birth from assorted Hindu-Vedic sutras and shastras, facts are stubborn things and have to be respected.

A good place to begin is that tiny sliver of agreement that I do find in my critic’s complaint. Venkataraman says: “Nanda is right that hatha yoga is not a monolithic 5000 years old tradition, but requiring that everything Hindu to be traceable back to Vedic times is ludicrous.”

My point, exactly! Indeed, my goal in writing the essay was to show that, to quote myself, “yoga is neither eternal nor Vedic,” that “it is a fundamentalist view of history to draw an unbroken line connecting the 21st century yogic postures with 2000 years old yoga sutras [and] the supposedly 5000 years old Vedas” and that “a tremendous amount of cross-breeding and hybridisation has given birth to yoga as we know it [making] yoga a unique example of a truly global innovation…” it is precisely the evolution of yoga through the modern era of colonialism, muscular Indian nationalism, Vedic scientism and commercialisation of Hindu spiritualism at home and abroad that I sought to highlight in my essay.

It is not I, but Aseem Shukla, the leading light of the HAF and the force behind the TBY campaign, who is making the ludicrous attempt to trace modern yoga back to a monolithic 5000 years old tradition. It is Shukla who has insisted repeatedly in his many writings that “the Vedas and yoga are synonymous and as eternal as they are contemporaneous”; that Patanjali’s Yoga Sutras composed around second century BCE have “formed the philosophical basis of practical yoga for millennia”; and that “yoga and yogic practices date back more than 5000 years.”

While we are on the subject of HAF’s original positions—and not the watered-down version of Venkataraman—it is the right place to set the record straight on the question of the mostly low-caste tantrics and hatha yogis who have always walked outside the Vedic-Patanjali tradition. It is most touching to have Venkataraman assure us that “HAF cherishes them as a part of Hinduism’s time-honoured tradition.” But surely there is a lot of back-pedalling going on here, for HAF at first saw them—right alongside cow-curry-caste—as a blot on India’s image abroad. In the opening salvo of the TBY campaign, Aseem Shukla wanted to spruce up India’s image by replacing the “colourful and harrowing wandering ascetics” with “the spiritual inspiration of Patanjali.”

This brings us to the hierarchy of different kinds of yoga. Venkataraman thinks I am “maligning” HAF as “casteist” when I refer to the well-attested fact that nearly all the hatha yoga classics are the works of Nath siddhas who, as David Gordon White puts it delicately, “were not members of the literati” but were grassroots alchemists, sorcerers, jogis and fakirs who sought immortality in their own bodies and in this life. The hatha yoga asanas they developed were meant to make the body strong and immune from death—not to still the mind to realise the pure soul, or purusa, as the Yoga Sutra teaches.

Well, if the HAF is already bristling at my reference to hierarchy of different kinds of yoga, here is something else they can bristle about: their self-Orientalisation. The HAF’s campaign to install Patanjali’s Yoga Sutra as the sacred canon of transnational yoga continues the time-tested tradition of that paradigmatic neo-Hindu and Hindu nationalist, Swami Vivekananda. As I have shown in great details elsewhere, Vivekananda imbibed the occultist, spiritualist and Theosophical currents that were quite fashionable in the United States during the years he spent there after his address to the World Parliament of Religions in Chicago in 1893. In his lectures on Raja Yoga, delivered before admiring audiences in New York, Vivekananda interpreted Patanjali’s Yoga Sutras as providing a “scientific” method for “seeing God,”—indeed, “becoming God” and acquiring “absolute power” over all of nature. His interpretation of Yoga Sutras by no means reflected the mainstream of Hindu thought in India at that time, but was tailor-made to provide a practical guide to Western seekers of spiritual wisdom. Very much in tune with the scholarly fashions of his day, Vivekananda looked down upon hatha (postural) yoga, calling it “nothing but a kind of gymnastics” which can help “a man live long, but only [as] a healthy animal.”

Times are different now, and hatha yoga’s interest in the body has captured the global imagination—thanks largely to Indian yoga-masters and swamis who set up ashrams and schools in the West. Naturally, far from looking down upon asanas as Vivekananda did in his time, Hindus in general and the HAF as their advocate take pride in their popularity. Yet, the typical neo-Hindu tendency of “spiritualising” all things of Indian origin remains strong: so the HAF “only” tries to “take yoga back” and subordinate it to a very similar set of spiritual ends that Vivekananda spelt out.

The underlying attitude is that the secularised, health and fitness oriented postural yoga is somehow inauthentic, fallen, tainted with Western decadence and devoid of psychological and spiritual meaning. Hindu purists seem incapable or unwilling to credit non Hindu Americans and other yoga practitioners with their own ability to integrate the asanas they do with their own sense of spirituality. Thus the HAF takes on the role of a stern parent who has to teach a wayward child what his/her real interests, aims and beliefs ought to be – and all of them, invariably, turn out to be what the “5000 years old” tradition teaches! The old prejudice – or rather chauvinism – of “Hindu India” as the guru of all nations is what animates the ideologues of the HAF.

Let me address the concerns Mr Venkataraman has expressed about the accuracy of the factual claims I have made in my essay.

I will admit one error of fact right away. Thanks to Venkataraman and the legion of others who have expressed their displeasure in the comments on the original article, I realise that I was plain wrong about pranayam, or breath control, when I wrote that “anyone who goes looking for references to… pranayam, neti, kapalbhati or suryanamaskar in classical Vedic literature will be sorely disappointed.” In fact, there are plenty of references to pranayam, or pranayam-like practices, in Vedic literature, including the Maitri Upanishad and the Bhagavad Gita. I was clearly careless here.

As for the rest, I stand by what I have stated in my original essay.

My critics, including HAF through Mr Venkatraman, have already indulged in endless rounds of nitpicking, and I don’t want to respond by picking some more nits. I will rest my case by citing what Koernraad Elst , a much-beloved figure among the gentle Hindu traditionalists and fire-breathing Hindu nationalists alike, has to say. (I never imagined that I will ever be on the same side as Mr Elst, but in this instance, he happens to be right on the mark). In his take on this who-invented-yoga debate, this is what he writes on his website:

I don’t think any other asana postures, except those for sitting up straight, have been recorded before the late-medieval Gheranda Samhita, Hatha Yoga Pradkipika and such. In the Bhagavad Gita, Krishna calls on Arjuna to “become a yogi,” but he gives no instructions in postures and breathing exercises. Libertines practising the whole range of Kama Sutra postures got more exercise in physical strength and agility than the yogis of their age who merely sat up straight and forgot about their bodies.

Those who live in glasshouses…

In an article titled The Rape of Yoga, Aseem and Sheetal Shah of the HAF lament that the $6 billion dollar strong American yoga industry has “appropriated the knowledge of countless yogis without so much as a nod of gratitude toward Hinduism, the faith that gifted them with this treasure.”

My advice to Shukla, Shah and the rest of the Hindu-American community: take a deep breath and get over it. Those who live in glasshouses don’t throw stones on others. In this world where people travel, and ideas travel at the speed of light, we all live in glasshouses.

As the recent disclosures by Norman Sjoman and Mark Singleton, which I have summarised in my much-attacked article, have shown, modern postural yoga has borrowed key movements, rhythms and sequences from the Western traditions of body-building, gymnastics, drills and dances.

Modern yoga was, of course, put together in India, by Indians, but with a whole lot of Western input. So let us not be so touchy and such purists about its Vedic-Hindu origins. Let us enjoy the mongrel that this thing called modern yoga is.

All power to mongrels!

Meera Nanda is a visiting professor of history of science at the Indian Institute of Science Education and Reserach, Mohali