Working for a cause, making a difference, fighting for change is suddenly cool again. Thanks in large part to the new occupant of the White House 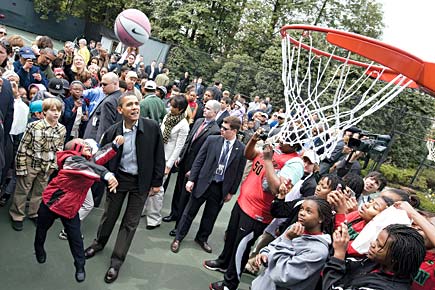 Working for a cause, making a difference, fighting for change is suddenly cool again. Thanks in large part to the new occupant of the White House


IN THE FILM Harold and Kumar Escape from Guantanamo Bay, the title characters crashland on President George W Bush’s ranch. Bush hustles them in. “You are awesome,” Kumar tells the then president after he lights a joint. “You don’t have to believe in your government to be a good American,” says the fictional Bush. “You just have to believe in your country.”

But for the young in the Obama era, being a good American means believing in their country, their government and their potential to make the world better. A deep civic engagement has burst forth. “They’ve become a generation of activists possessed with that most American of ideas,” President Barack Obama said recently, “that people who love their country can change it.”

Obama has just signed the Edward M Kennedy Serve America Act, which allows students to earn college money by volunteering. It’s the ideal law for an idealistic era that arrived thus: the ‘Me Decade’ of the 70s bled into the 80s’ yuppie paradise. Then, the fall of the Soviet Union meant global hegemony. “We’re the kings of the world,” thought the listless slackers of Generation X.

But 9/11 shattered that. Iraq, Afghanistan and New Orleans followed, making young Americans acutely aware of the suffering beyond their immediate world—some of which could be traced back to their own government. Former president Bill Clinton and u2’s Bono led a push to reduce global poverty. After his bestseller The End of Poverty in 2005, Columbia University professor and economist Jeffrey Sachs achieved near-rock star status. Former vice-president Al Gore followed with the environmental warning An Inconvenient Truth in 2006. By the time Gore won his Nobel in 2007, Generation Do had another leader and another favourite cause.

But it was the election of Obama that proved the tipping point. According to Circle, a research centre for youth civic engagement, young voter turn-out increased steadily since the 2000 presidential vote. In 2008, it rose further, as Obama’s foot soldiers—hundreds of thousands of volunteer campaigners, tens of millions of online supporters—took to the polls. Sensing the shift, Obama called for “a new era of responsibility” during his inauguration speech.

AmeriCorps, the US government’s domestic volunteer programme, has seen applications jump four-fold since November. Applicants for Peace Corps, the US international volunteer organisation, are up 25 per cent.

Engineers Without Borders, a non-profit working with developing world communities on small-scale water, energy, housing and other sustainable projects, has grown by more than half in the past 18 months. Dubbed the ‘blueprint brigade’ by Time, it has also spread to Germany, France, Egypt, India, Rwanda and Sudan. The number of volunteers aged 16-24 is double that of a generation ago.

The global downturn seems only to have stiffened resolve. In fact, one of the few expanding sectors in the US economy is the non-profit sector, due to a crush of interns and volunteers.

With Obama in the White House, the do-good ethos is part of the zeitgeist: making a difference is cool. Initiatives have sprung up online, from Facebook Causes to myImpact.org, a soon-to-be-launched site by two university students that will allow volunteers to measure the difference they’ve made. MTV has a new reality series, The Buried Life, in which four buddies travel the country fulfilling the dreams of less well-off locals.

Ashton Kutcher, who rose to fame in the 90s playing an egotistic slacker on the sitcom, That ’70’s Show, has also chipped in. In April, he challenged CNN to race him to 1 million Twitter followers, with the loser sending 10,000 insecticide-treated bed nets to Africa to fight malaria. Even Kumar has had a change of heart. Kal Penn, the slacker-stoner in the Harold and Kumar… films, has joined Obama’s Office of Public Liaison.

This generation may never change the world, or even its own country. They may not always have the purest intentions at heart. But a compulsion to do good seems a clear improvement on one to get rich, or to do nothing at all.