These marvels from China show just how far ahead China has pulled of India. 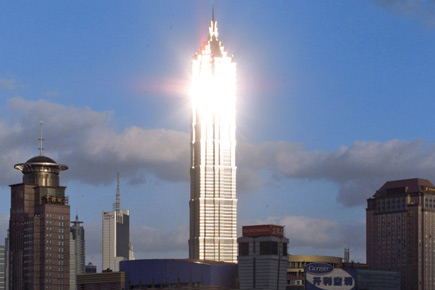 These marvels from China show just how far ahead China has pulled of India.


Some of the engineering marvels that China has erected in the past ten years are larger than anything India has in scale or ambition. These mega-structures underline the Chinese growth model that puts infrastructure upfront and investment follows. All the structures shown here are functional, and with 45 per cent of China’s $450-billion economic stimulus to be spend on infrastructure, you can bet on many more such dazzlers coming up this decade.

This building in Shanghai is the nerve centre of China’s financial boom. It is said to be one of the world’s best places to work.

The world’s highest trans-country highway, it connects China to Pakistan through the disputed Aksai Chin territory.

The magnetic levitation train of Shanghai has a normal speed of 430 km an hour. Built by Transrapid of Germany, it is a fine display of how science can transcend fixations of yore and open minds. It does the 30 km airport-to-city run in eight minutes.

It has more floor space than Heathrow’s five terminals combined, and is the world’s 18th busiest airport.

The world’s largest hydro electric project. It will produce 22,500 MW of electricity.

The rocket has helped China put a man in space, making China only the third country to ever do so, after Russia and the US. It could well land a Chinese astronaut on the moon, as well.