In the midst of the Afghan war, Indians have been conserving pre-Islamic art, Buddhist monuments and Mughal gardens, even tracing links back to the Bronze Age. 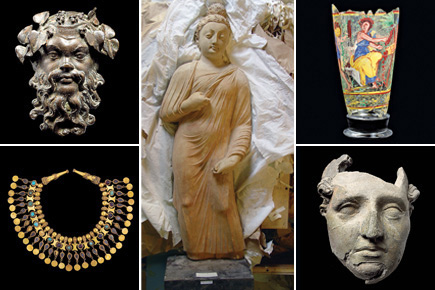 In the midst of the Afghan war, Indians have been conserving pre-Islamic art, Buddhist monuments and Mughal gardens, even tracing links back to the Bronze Age.


A jangling phone shattered the cultivated silence in The British Museum’s office in London. A curator’s hand hovered over it, and then picked it up slowly. It was late 2001. Over the sound of howling jets came the voice of The Observer’s war correspondent in Afghanistan: “I’m calling from the Bagram airfield control tower. A squadron of stealth bombers is about to raze it. Your comments on Bagram’s significance?” Bagram, quite simply, was the site of the world’s greatest art treasures. And Naman Ahuja, curator of South Asian Sculpture, felt his blood run cold. Buried deep was a shard of personal history—both his grandparents were born in Bannu, Afghanistan. Those bombers were about to obliterate a country where “India has had a civilisational stake which dates back to the Bronze Age”.

Just north of Kabul, Bagram was the summer capital of the Kushan Empire that traced an arc up to Mathura (now in Uttar Pradesh) during 1st–3rd century CE. Spices and textiles used to cross between Mathura and Bagram, even as spirituality hitchhiked unseen along this Silk Route. It’s what gave us Gandharan art that’s endured for millennia. Long before Afghans held AK-47s, some 2,000 years ago, their hands cradled delicate Roman glass goblets. In the 1930s, French archaeologists found an entire stash of these world treasures, ready for shipping in a merchant’s strong room, along with Indian ivory thrones carved with Buddhist Jataka Tales. It was priceless evidence of how Bagram’s cosmopolitan trade was flourishing as Rome crumbled. “Archaeologists rarely unearth objects as fragile as glass, ivory and jewellery,” says Ahuja.  Yet, Bagram, home of spectacular antiquity, could do nothing to stop itself being battered by the coalition of the war-willing. Again.

Since 1979, Afghanistan’s most enduring sound has been the boom of war. From Russian missiles and Talibani rocket launchers to Nato’s attack drones, continual combat for 30 years has ravaged homes down to their last mud-brick. For ordinary Afghans who’ve grown up on conflict, peace is an idea that’s lobbed about as carelessly as a grenade. Bread, clothes and shelter are desperately needed. But holistic healing might require memories. So, beyond the $662 million of reconstruction aid, India is making a discreet effort to conserve Afghanistan’s heritage. Before and during the recent wars, Indian hands have been conserving pre-Islamic art, Buddhist monuments, Mughal gardens and mosques, all in a land now thought to be the Ground Zero of Fanaticism.

It was back in 1971 that the Archaeological Survey of India (ASI) did its restoration job on the Buddhas of our distant suburbias, so to speak: Bamiyan. Alongside excavations of nearby pilgrim caves, conserving the towering twin 5th century sandstone sculptures was part of “a challenge thrown to us by Prime Minister Indira Gandhi”, in the words of Balbir Singh, an ASI engineer who spent five years in Bamiyan (which means ‘coloured’ in Sanskrit).

They did such a fine job that one could nearly hear the Buddhas breathe. And when the ASI redid the Khwaja mosque in ancient Balkh, “Pakistan radio announced that Hindus were saving Islamic holy sites,” adds Singh, now 80. Some of the Bamiyan work was done by prison convicts. “There was a labour shortage, so we trained 150 prisoners in how to restore the cracks on the body and face of the Buddha,” recalls Singh. Together, the ASI and prisoners worked hard to restore Bamiyan’s ‘Big Buddha’ to its original height of 175 feet.

Three decades later, the Taliban famously blasted these Buddha statues to bits, evoking dismay and shock around the world and bringing into sharp relief Afghanistan’s crisis of conservation.

Yet, a love of art has lingered in Afghanistan’s war-wounded civilisation. In 1988, as civil insurgency threatened the country, Kabul Museum officials locked away most of their treasures. Risking death, these tahwildars (key holders) kept their covenant for 25 years, coming forward only after Hamid Karzai was sworn in as president in 2004. That move misfired. The treasures they had saved remain unseen in Afghanistan ‘due to security reasons’; instead, they’re on a world tour as part of a museum in exile: ‘Afghanistan, The Hidden Treasures of the National Museum Kabul’ goes the banner, in America and Europe.

Fredrik Hiebert, National Geographic fellow and curator of ‘Hidden Treasures’, prefers to call the travelling exhibition ‘an ambassador’ of Afghan art. To his mind, “This Afghan war is a very small part of history; for 4,000 years the Afghan plateau has been a centre of high art, culture and tolerance, not destruction.” The show has already dazzled more than a million viewers internationally, with its Silk Road Riches—Bagram artefacts, Bactrian gold ornaments and Greek treasures. This exhibition opens at the British Museum in March 2011.

In contrast, Indian restoration has been in situ. When conservator-architect Ratish Nanda first saw the Bagh-e-Babur by the slopes of the Sher Darwaza Hills in 2002, this 11-hectare ‘garden of paradise’ looked like the scrubland of purgatory. The last resting place of the first Mughal emperor had been wrecked by civil war. “All the trees in Babur’s garden tomb had been sawed off for firewood, there was just a single stump left, riddled with bullets. Even Shahjahan’s mosque had live rockets sticking out of it, ” says Nanda, who was entrusted by the Aga Khan Trust for Culture (AKTC) with reviving Bagh-e-Babur. Before restoration, the garden had to be cleared of mines and ammunition. It took three truckloads.

A modest Mughal site, Babur’s tomb was a pilgrimage spot for his dynasty that reigned over Hindustan for about two centuries. Akbar visited twice, Jehangir built a marble headstone over his great-grandfather’s tomb, and Shahjahan dedicated a marble mosque to the garden. In the 1950s, Babur’s tomb was desecrated by ‘a concrete superstructure that looks like a bus stop’, wrote Bamber Gascoigne in his bio-epic, The Great Mughals. This was the work of Italian restorers. “I was there for Babur and to restore the dignity of a burial site,” says Nanda. A few Afghans did wonder aloud why Indians who’d “destroyed Babri Masjid” should bother restoring Babur’s tomb, but this only strengthened the team’s resolve.

They dug till they unearthed the layout of the char bagh: a central channel, eight tanks, terracotta pipe sections and the Makrana marble fragments of Babur’s Tomb. These were studied for their architectural craftsmanship and details. Based on an 1840 camera lucida sketch made by explorer Charles Masson, Indian stone masons authentically recreated Babur’s tomb in white Delhi marble. Their hands still held unforgotten skills, the ability to carve out naturalistic 16th century designs… curving flower petals, scalloped pigeon breasts and delicate jaalis. After all, the Mathura-Bagram corridor was a continuum of mutually embedded art, sculpture and architecture long before US armed forces corrupted the word ‘embedded’ to give the world a one-sided view of war.

Kept open to the public—and barred only to gun-toting fighters—Bagh-e-Babur took five years and 800,000 man days (that’s a lot of employment) to achieve a semblance of serenity. Today, even without a formal opening, there are 20,000 visitors each Friday, and about 100,000 on Navroze. For battle-weary Kabuliwalas, it offers tranquillity, birdsong and the perfumed shade of peach, pomegranates and wild cherry trees. This self-sustaining char bagh, which earns $20,000 annually, is on the tentative World Heritage list. While much has been salvaged, some 1990s’ damage has been left visible—deliberately.

There has been academic engagement as well. About two years ago, seven curators from the Kabul Museum were invited as honoured lifetime-fellows to Delhi’s Jawaharlal Nehru University. Awaiting them was a customised curatorial course: ‘From the Bronze Age to Bamiyan.’ It bravely collapsed Central Asia, Gandharan art, numismatics, early Buddhist iconography, art and archaeology into an intensive one-year study. The idea was to increase the knowledge of art among Afghans who’d been kept brusquely alienated from their pre-Talibani past. Practical skills were also imparted, such as database management, digitisation and resource sharing.

The University of Vienna had tried this earlier, but Kabul’s curators couldn’t adjust to its cultural climate. They felt more at home in India. So this time, Vienna’s academicians joined hands with JNU. Learning flowed both ways. “Since Independence, India has lost its knowledge base on Gandhara,” says Ahuja, now associate professor at JNU.

Travelling down the Mathura highway, the visiting curators found their modern boundaries blurring as the Kushan era began to come alive. They gasped at a giant red sandstone Kanishka statue, embodying classical Grecian anatomy, draped with Chinese textiles and conveying a made-in-Mathura spirituality. “The statue of the Great Kanishka is the same as we have in Kabul Museum,” says Mohammad Mansoor Alemy, database operator at the National Museum of Afghanistan.

In Mathura, Vajrapani, standing besides the Buddha, looks like Hercules. In Teppe Shotor beyond Jalalabad in Afghanistan stood “a Vajrapani so Roman that you’d call him Hercules” says Ahuja. This site was bombed in the 1980s, perhaps by Russians. Afghanistan is also home to Shiva-like statues, a brazen Lajja Devi and a Zoroastrian wind divinity, Veshyo, yet to be seen by the world.

Back in Kabul, Alemy says, “We would like to come to Delhi again to study the art history of India and especially to know more about the Buddha’s life.” But as Operation Enduring Freedom turns into America’s longest war yet, none of Afghanistan’s trove of 1,500 archaeological sites seems safe. In World War II, art historians moved with American battalions to safeguard art. “I myself work with the US army to alert battalions about cultural sites,” says Hiebert, before clarifying, “There will always be collateral damage.” Coalition soldiers get brochures and playing cards, some printed with educative message like ‘don’t pick up archaeological finds’, to sensitise them to their surroundings, but that’s it.

The mounting toll of the war on terror shows up in an erasure of evidence and memory among Afghans. “We have to see these losses and damages as our own,” declares Ahuja. Right now, there’s a small posse of 500 archaeological policemen guarding Afghan sites. But every Friday, a heavy haul of antiques from Bagram flies out on commercial planes. Over the last seven years, as a fallout of the Afghan insurgency, spectacular Gandharan sculptures have surfaced in international art markets via Dubai.

Before rushing in to claim it, we’ve got to ask whose Greco-Buddhist art it is anyway. If Greece tries to defend its art, soldiers following the footsteps of Alexander would have to conquer the world. They’d have to march to central Asia, without pausing to burn Persepolis, get from Bagram to Mathura, and sweep south to rescue a Poseidon statue in Maharashtra. But before that, they’d have to face Indian defenders of Silk Road Art in Kabul, Bamiyan and Delhi.