India needs to strengthen the UN’s hand in censuring Sri Lanka. But that requires facing up to its own human rights record 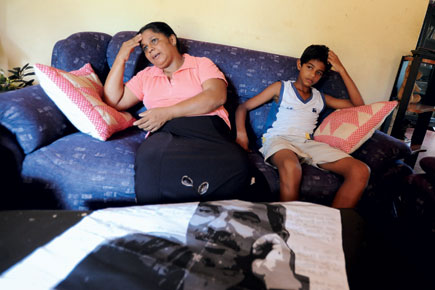 India needs to strengthen the UN’s hand in censuring Sri Lanka. But that requires facing up to its own human rights record


On 24 January 2010, Prageeth Eknaligoda—journalist, cartoonist, father of two— stepped out of the Lanka eNews website office near Colombo. Prageeth had been actively reporting on the country’s forthcoming presidential elections. The previous week, he had done a comparative analysis of the two main presidential candidates, coming out in favour of the opposition candidate, Sarath Fonseka. It was a risky position to take, considering the recent attacks on Sri Lankan journalists and media workers who had dared to be critical of the government.

Too risky, as it turned out. Because on that day, over two-and-a-half years ago, Prageeth Eknaligoda never came home.

Local residents would later say they had seen a white van without number plates close to Prageeth’s house around the time he went missing. His wife, Sandhya, would approach the police, the courts, human rights groups and even the UN, seeking answers and accountability. But all to no avail. In later months, Prageeth’s office was set on fire by unidentified attackers, the Lanka eNews website blocked, and its editor briefly arrested. And today, on the ‘International Day of the Victims of Enforced Disappearances’, Prageeth Eknaligoda is still missing, one of the many Sri Lankans who have been virtually forgotten by their government.

Today, human rights violations like Prageeth’s ‘disappearance’ are almost never investigated or punished in Sri Lanka. When the Sri Lankan government won the armed conflict against the LTTE in May 2009, it had promised much: increased respect for human rights, an end to discrimination against minority Tamils, and an investigation into crimes under international law committed during the last months of the conflict. But three years later, it is clear that those promises have not been kept.

Hundreds of Sri Lankans continue to languish in arbitrary and illegal detentions, which are used against suspected terrorist threats, but also against outspoken, peaceful critics and other perceived political opponents of the government. Sri Lankan authorities invoke anti-terrorism legislation like the Prevention of Terrorism Act to arrest suspects without evidence or warrants and hold them without charge for long periods. At other times, people like Prageeth just disappear, often abducted by unidentified men in white vans. Many of the victims are Tamils suspected of links to the LTTE, but Sinhalese and Muslims also suffer. Torture and custodial killings are hallmarks of Sri Lankan policing.

Sri Lanka’s culture of impunity dates back decades. The Lessons Learnt and Reconciliation Commission (LLRC) was set up by President Mahinda Rajapaksa to investigate the failure of Sri Lanka’s 2002 ceasefire with the LTTE and ‘events’ that followed, and make recommendations for post-conflict reconciliation. It lacked independence and did not properly investigate allegations of crimes under international law. But even this largely uncritical inquiry highlighted some serious issues and called on the government to investigate rights violations and improve the treatment of detainees. These recommendations have not been effectively implemented.

Mahinda Rajapaksa’s unwillingness or inability to act has rightly attracted international censure. In March this year, the UN Human Rights Council adopted a resolution urging Sri Lanka to investigate alleged abuses committed during the conflict with the LTTE. India, in a rare show of non-abstention, voted for the resolution. But the vote came only after Parliament was disrupted over the issue by MPs from Tamil Nadu, including some from the DMK, a key member of the UPA.

India’s studied silence otherwise on human rights violations in Sri Lanka is undoubtedly influenced by economic and geo-political concerns. Wary of China’s growing influence in the region, India is growing more vocal about its historical ties with Sri Lanka and boosting its investment in the island. In early August, Commerce and Industries Minister Anand Sharma offered preferential access for Sri Lankan goods into India, announced that India would set up an engineering and manufacturing Special Economic Zone in Trincomalee, and said that bilateral trade between the countries ought to double to $10 billion by 2015.

But perhaps part of the reason for India’s silence is its own dubious rights record, now under scrutiny by the UN Human Rights Council in its Universal Periodic Review (UPR) process. Last year, the Jammu & Kashmir State Human Rights Commission identified over 2,700 unmarked graves in four districts of North Kashmir, and ordered a probe into over 3,800 unmarked graves in two other districts. Human rights groups in the state say there have been at least 8,000 enforced disappearances since 1989.

Sri Lanka’s much-abused Prevention of Terrorism Act is similar in letter and spirit to India’s Armed Forces Special Powers Act (AFSPA) and the Jammu & Kashmir Public Safety Act (J&K PSA). Hundreds of people suspected of involvement in protests, political leaders and activists are in detention without charge or trial in Jammu & Kashmir under the PSA. So if India were to actively urge Sri Lanka to act on human rights violations, it would be doing so from a very fragile glass house.

Yet pressuring its southern neighbour is exactly what India must do. If it wants to be acknowledged as a global leader and true democracy, capable of assuming a larger role at the UN Security Council, India needs to show strong human rights leadership, both at home and in the region.

Later this year, India will have another chance to hold the Sri Lankan government accountable. In November, India, with two other countries, will facilitate the UPR review of the human rights situation in Sri Lanka. The Rajapaksa government’s human rights record for the past four-and-a-half years will be questioned, and it will have to respond to recommendations it receives. For Sri Lanka, the UPR will be another international bullet to dodge. For India, it could be a chance to show some much-needed leadership in foreign policy, and an opportunity to put principles above politics.

Sri Lanka may have ended its armed conflict, but for its wounds to really heal, it needs to correct both its past and present wrongs. India must realise that its close ties imply a duty not to Sri Lanka’s government but to its people.