Forced to flee by the Taliban, they remain haplessly homeless in a country where space for minorities has shrunk alarmingly 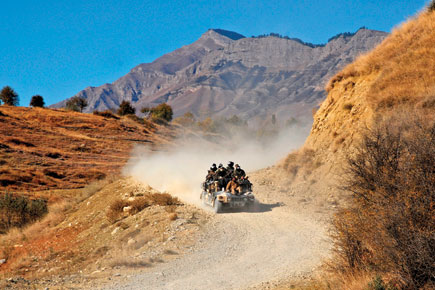 Forced to flee by the Taliban, they remain haplessly homeless in a country where space for minorities has shrunk alarmingly


PESHAWAR — It was early 2009 when the Sikhs of Orakzai Agency were forced out of their homes by the Taliban. Nearly a thousand people left their belongings, businesses and homes, fleeing this part of Pakistan’s lawless tribal area for different parts of the country, with the majority settling in Peshawar. More than 18 months later, they are still here: destitute, homeless and with no way back home.

It is a fate that has befallen Sikhs from other parts of northwest Pakistan as well, notably Khyber Agency, Khurram Agency and Swat, overrun by the Taliban. At the Bhai Joga Singh Gurdwara in Peshawar, a small group of these Internally Displaced Persons (IDPs) gather to retell their tragic story, as Sikh devotees clean the gurdwara in preparation for the evening prayer services.

Tablog Singh moved to Peshawar, home to thousands of Sikhs who have lived here since before Partition, with his family of five. A cloth trader, he left everything behind when the Taliban asked him and others to convert to Islam or face death. When the Taliban first came to Orakzai in early 2008, he says, they assured local Sikhs that they would not bother them. “It was later that the threats began.” Amir Singh, another Sikh from Orakzai, moved to Peshawar with his two brothers and their families. He and his brothers ran cloth and grocery stores, with the third working at a petrol pump.

Both Tablog and Amir complain that their children are unable to get admission to Peshawar schools since their administrations demand school certificates, which they left behind. Nor have they been able to contact anyone in Orakzai to inquire about the status of their houses. “We had a gurdwara there. When we left, the Taliban took it over.” These Sikhs say they have refused Indian offers of help. They wear their patriotism proudly, and say that they will live and die in Pakistan Sahib Singh, a prominent member of Peshawar’s Sikh community, mentions reports of the Taliban having taken over houses abandoned by Sikhs, sold off their valuables, and even burnt down some of their shops.

Tablog and Amir are unaware of what happened to the gurdwara, but say there is a possibility that it has been destroyed. The Taliban are not known for compassion. Amir Singh recounts the trauma of the last moments spent in Orakzai. Members of the Taliban took a Sikh hostage— demanding a ransom of Pakistani Rs 63 lakh—to secure the release of whom the Pakistan Army embarked on a military operation. But in the meantime, the security situation became so fragile that Sikh families were forced to depart overnight, leaving their legacy of years of hard work behind.

“We don’t know what their names were, we were sent a message, ‘Ameer sahib is calling you.’” Amir says that many of the militants were from Waziristan, where the Tehreek-e-Taliban Pakistan is based. “They had lots of arms, they had big cars,” Tablog adds. They were not the townsfolk they knew, for sure. “We never had any dispute with the people of Orakzai before the Taliban came. If the conditions get better, of course we’ll go back,” says Amir. “The people of Orakzai were very upset when we left. But they were helpless… the Taliban killed people who they suspected of being traitors,” adds Tablog.

Sahib Singh says that Peshawar’s Sikhs have taken the responsibility of giving their brethren refuge. “Our gurdwara has rooms, so some of them stay there. Others have relatives living in Peshawar, so they’ve moved in with them.” Many of them, says Sahib, have taken loans from their friends to support themselves. Many, including Tablog, remain unemployed. “They don’t have any skills,” says Sahib, “most of them used to work on their farms or ran a business. A lot of them aren’t educated either, so it’s hard for them to find work here.”

The discomfort is evident. “My children and wife want to go back,” says Tablog, “They like the open space there; here we have to live in one room in a small house.” What’s felt more acutely though, says Sahib, is the sense of dismay at being made to feel like inferior citizens. “We have been treated unfairly. No one has come and asked us about the situation, no one has come and offered us condolences for what happened.”

According to Sahib, the “Gurdwara Committee of Amritsar” had offered to have the displaced Sikhs settled in India, but they refused, citing patriotism. Yet, they have not received a paisa from the Pakistani government, nor have they been registered as IDPs in the city— which could make compensation for the financial losses they suffered and houses they left behind a long wait. According to Pakistan’s Federal Ministry for Minorities, a project worth Rs 80 lakh has been implemented for religious minority IDPs from Swat and Malakand, including those who moved to Hasan Abdal, a holy site for Sikhs. The ministry also says that apart from distributing Rs 60 lakh in cash to IDPs, they also gave Rs 5 lakh to the family of a Sikh who was beheaded in Orakzai.

The Pakistan Army is still in the midst of a military operation to clear Orakzai of militants, and its end seems nowhere close. Till its success, Tablog and others like him will not be able to return. They remain in limbo. The real tragedy, though, is the neglect of Sikhs by the government. “We won’t leave Pakistan,” says Tablog, “we are patriotic people.” The sentiment is echoed by Sahib. “We will live and die here,” he declares.