What Obama has done to America is visible in what its comedians are saying. Take, for example, two avowedly apolitical rallies recently held in the US capital 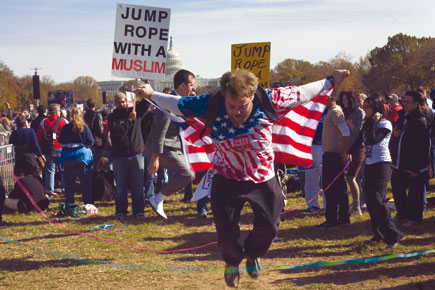 What Obama has done to America is visible in what its comedians are saying. Take, for example, two avowedly apolitical rallies recently held in the US capital


By the time Barack Obama reaches India with his entourage on 6 November, he will have received and responded to the mid-term verdict on his embattled presidency. India will host an American president either newly emboldened by a fresh mandate, or, as the country’s many, many political pundits predict (punditry being the only growth industry in the present US economy), chastened by a lost majority in Congress and confronted with palpable proof that the country is losing hope in the change he promised to bring to sclerotic, moribund Washington DC. He, like the rest of us, will have learnt how Americans feel his “hopey changey thing”, as former vice-presidential candidate and full-time ‘real American’ Sarah Palin put it, is working out for them. The almost Obama-like rise of the Tea Party movement, with all the accompanying fervour over change, suggests a populace fast losing patience with its President.

Or so some would have you believe. On a suitably mild autumn Saturday, the day before Halloween, three days before the mid-term elections, Americans in hundreds of thousands descended on the National Mall in their nation’s capital to reiterate their faith in the Obama project. The qualifier is necessary because while the crowd—estimated at well over 200,000—was overwhelmingly ‘liberal’, made up of people who, if they vote, vote Democrat, the rally’s political aims were ambiguous. And then there’s the fact that the two men the teeming masses came to see were comedians whose objectives were self-avowedly apolitical.
Satirists Jon Stewart and Stephen Colbert, hosts of popular shows on the cable channel Comedy Central, organised the ‘Rally to Restore Sanity and/or Fear’, according to the official website, as a ‘call-to-reasonableness’, an antidote to a culture in which ‘the loudest voices’ are ‘the only ones that get heard’. This was a rally ‘for the people who’ve been too busy to go to rallies’, people whose political views were amorphous and whose purpose in coming together in such numbers was, in order of priority, to have a good time and protest the quality of national debate. Play nicely, was the rally’s message to the partisans squabbling in the sandbox, mummy’s at the end of her tether.

It says something about the esteem for politics in the US when the two recent rallies that have caught the American imagination and commandeered the national conversation have both maintained an apolitical posture, claiming instead to represent interests beyond the pettiness and messy expediency of electoral machinations. The first of these rallies, to ‘restore honour’, was organised by Glenn Beck, a conspiracy theorist and flatulent blowhard who clambers onto his Fox News-sponsored soapbox to tell his viewers, for instance, that hip-replacement procedures cost more in America than India because American doctors “studied at Harvard rather than Gajara-raja Medical School”.

On his Fox News show, Beck tends to spend a lot of time at a blackboard festooned with quasi-scientific diagrams that prove Obama is a particularly virulent strain of neo-Nazi/Maoist who wears a red shirt under his brown shirt. Then there’s Obama’s communism coupled with his devotion to radical Islam. In a lengthy recent profile of Beck, the New York Times Magazine described him and Sarah Palin as ‘spiritual leaders’ of the Obama-allergic Tea Party. Beck and Palin co-starred in the former’s rally held at the end of August, attracting a crowd slightly smaller than the one at Stewart and Colbert’s rally.

Both rallies evoked abstract notions such as ‘honour’ and ‘sanity’ rather than politics. Both rallies sought to unite the country, not so much through their respective lenses of faith or reason, but by appealing to the crowd’s nostalgia for an honourable America, a reasonable America, a platonic ideal of a country that could never have existed outside the minds of those at the rallies.

I was at Stewart and Colbert’s ‘Rally to Restore Sanity and/or Fear’, so I don’t want to draw a false equivalence between the two rallies. Beck is a self-confessed ‘rodeo clown’. But he has a show on a news channel, and his opinion, his editorialising, comes loaded with the presumed authority of a news outlet. Clips of interviews with some who attended his rally, available to all on YouTube, are rife with xenophobia—whether directed at Obama’s cosmopolitan background, Muslims, or outsourcing—born of ignorance perpetuated and pandered to by their sources of information. Stewart and Colbert, on the other hand, are comedians on a channel devoted to comedy. It is a lamentable irony that they act as checks and balances, rational, fact-based counterpoints to the comic absurdities purveyed by news anchors and commentators. And yet, the two rallies are inextricably linked, each, to borrow a metaphor from Stewart, a distorted fun-house mirror image of the other.

Just as politics could not be divorced from faith at Beck’s rally, Stewart and Colbert’s carefully neutral show could not mask the crowd’s political unanimity. Indeed, since the idea for the latter began as a parody of the former, an argument could be made that without Beck’s rally, Stewart and Colbert’s rally would not have a raison d’être. Irfan Shuttari, who I interviewed at the rally, disagrees entirely with that premise. He and his sister, Wajeeha, came up with the inspired idea of inviting rally-goers to “jump rope with a Muslim”. Irfan and Wajeeha exposed as ridiculous the call for Muslims, law-abiding, educated, tax-paying Muslims, to prove they are ‘moderate’. And it was funny. My abiding memory of the day will be the sight of rally-goers—children, their grandparents, a young man wrapped (ironically, of course) in an American flag, another wearing (again, ironically) a bow-tie—skipping joyfully over a rope twirled by young women wearing hijabs.

Shuttari told me that the rally was a chance for moderates to not allow ideology and ideologues to “dominate the discussion”, that they were “defeating stereotypes”. Except nobody at Stewart and Colbert’s rally was saying, as people were at Beck’s rally two months earlier, that they “learnt all [they] needed to know about Islam on 9/11”. Oddly, minorities were scarce at both rallies, the one for the progressives holding just as little appeal as the one for the xenophobes. Odd, maybe, until you consider that the real division in the United States, evident in microcosm at both rallies, might be between expensively educated White people living in urban centres and college towns and badly educated White people on the periphery, living in provincial towns with fewer economic opportunities, and who, consequently, feel increasingly alienated.

As someone with more than one college degree, living in Washington DC (albeit an Indian citizen with no stake in American politics), it’s hard not to acknowledge a kinship with the wry affability on show at the Stewart and Colbert rally. The signs were frequently funny, articulate, clever and pointed. There was a campus atmosphere of bonhomie, genial irreverence and comfort in the company of fellow bien pensants. More than one sign called for the civility of the seminar room or expressed approval of ‘expert opinion’. Polite discussion in college seminar rooms, though, is conducted largely among young people from the same socioeconomic class. Diversity in American universities rarely refers to class. This is borne out by books and studies that show that apparently meritocratic American universities are dominated by children of the well-off, that even those children with mediocre records go to college at the same rate as the brightest, highest-achieving children from poorer families.

It takes a certain self-regard to posit oneself as sane in a world full of insanity, a self-regard fostered perhaps in the echo chamber of the contemporary college seminar. This is why Stewart and Colbert, no doubt aware of leaving themselves open to accusations of arrogance, pick on the loudmouths of cable news. An Indian audience, subject to its own array of insufferable news channels, understands the urge to tell the media to shut up. Our media, pressured to turn a profit, also feeds viewers to the point of nausea on a diet of sensationalism, frippery and hysterical rhetoric masquerading as debate. The acerbic Peepli Live showed how journalism has become a feeding frenzy on scraps of misery. But, as even Jon Stewart admitted in his address at the end of the rally, bad journalism and rude commentary are the result of certain conditions rather than the cause.

The problem in the United States is that the proliferation of media has enabled the like-minded to enclose themselves in a self-congratulatory group hug. The Stewart and Colbert rally was no exception. Why not a rally to restore doubt, or a rally to restore empathy? Instead, each side maintains an unchallenged confidence in the validity of its own views. Stewart invoked an image of cars trying to squeeze into a tunnel to explain how America, outside of Congress and cable news, works. The people in these cars, he pointed out, in an argument similar to Amartya Sen’s arguments on identity, are protean, defined as much by their taste in food, say, or popular music, as their religion or political principles. Indeed, Stewart intoned, each traveller may hold views directly inimical to those held by their fellow travellers, but if they are to pass through the tunnel they must compromise, work together. It’s an imperfect metaphor—the ‘compromises’ made by the drivers come at no cost, since they don’t know the principles of the other drivers and don’t have to question their own. But Stewart’s point is evident: people must rub along, it’s the only way to get anything done. The danger, though, in lecturing about the need to “reach over the aisle” to a group entirely homogenous in character is that it begins to sound like high cant.

Both Beck’s rally to restore honour and Stewart-Colbert’s sincere parody claimed to be above politics, a stance belied by the clear politics of their respective audiences. Both also claimed to foster unity when all they succeeded in doing was to crystallise differences. Of course, for this observer, Stewart’s rally was fitfully amusing, while Beck’s fitfully frightening. Both rallies will serve as symbols of a particularly contentious mid-term election. Symbols, whatever the stated intentions of their organisers, of two fundamentally opposed ideas of America. This election will likely define the rest of Obama’s first term and his prospects for a second. Whatever the result, his trip to India will be a welcome escape.