London’s tallest structure, dwarfing the Statue of Liberty by 22 metres, is being designed by Indian-origin sculptor Anish Kapoor. And what’s more, NRI Lakshmi Mittal is footing the bill. 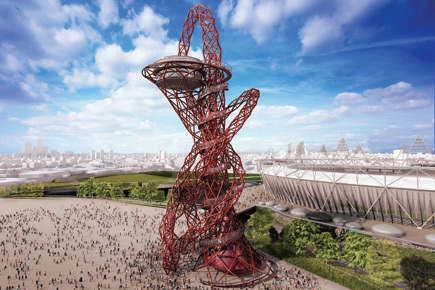 Not only is London’s tallest structure being designed by an Indian, it will also be paid for by one.


Not only is London’s tallest structure being designed by an Indian, it will also be paid for by one.

London is getting a new landmark–an iron sculpture that will become the tallest building in the UK. And not only has it been designed by an Indian, it will also be paid for by one.

The 2012 Olympics will be held in London, and to mark the occasion, the Mayor of London’s office has commissioned a new public attraction in the Olympic Park. A competition was held in which Britain’s best designers were asked to send in their vision for the iconic monument. A spiralling sculpture going into the air by the award-winning artist Anish Kapoor was chosen, and the person footing £16 million of the total £19 million cost, is the richest man in Britain, Lakshmi Mittal.

The 115-metre tall structure will be 22 metres higher than New York’s Statue of Liberty. The breathtaking sculpture will consist of a continuous looping lattice of tubular steel, incorporating the Olympic rings. It will have a special viewing platform offering unparalleled vistas of the entire 250 acres of the new Olympic Park being created in London’s East End as well as the skyline of the city. Visitors can take a trip up the statuesque structure in a huge lift and have the option of walking down the long spiralling staircase if they feel up to it.

“I am deeply honoured to be invited to undertake this challenging commission,” says the Mumbai-born Kapoor. “I am particularly attracted to it because of the opportunity to involve members of the public in a close and personal way. It is the commission of a lifetime,” he adds.

The 56-year-old Kapoor is one of the most influential sculptors of his generation. He has lived and worked in London since the early 70s and considers the city his home. He came here to study at the Hornsey College of Art in 1973 and went on to make his mark internationally. In 1991, Kapoor was awarded the Turner Prize, Britain’s most prestigious contemporary art award. He is well known for his use of rich pigment and imposing yet popular works, such as the vast, fleshy and trumpet-like Marsyas, which filled the Tate Gallery’s huge Turbine Hall. Then, there’s the giant reflecting, pod-like sculpture Cloud Gate in Chicago’s Millennium Park. His recent record-breaking show at the Royal Academy of Arts is the most successful exhibition ever by a contemporary artist in London, attracting more than 260,000 visitors in three months.

Anish Kapoor’s proposal has been developed in collaboration with one of the world’s leading structural designers, Cecil Balmond of Arup. Balmond, who trained and lives in London, is known for his innovative work on some of the greatest contemporary buildings in the world, such as the CCTV building in Beijing. The two began working together on the Marsyas project in 2002 and have become renowned for their ambitious, large-scale public art projects.

Indian steel magnate Lakshmi Mittal will fund up to £16million of the project, with £3.1million provided by the London Development Agency. In return, the monument will be called the ArcelorMittal Orbit. “The Olympic Games are one of the few truly iconic global events. I was immediately excited by the prospect of ArcelorMittal becoming involved because it’s a global company with operations in more than 60 countries. And as someone who lives in this great city, I remember the great excitement felt when it was announced that London had been selected to host the 2012 Olympic and Paralympic Games,” says Mittal, CEO of ArcelorMittal.

Despite being the richest man in the UK with a fortune of over £22 billion, and living in London, Mittal has often been criticised for paying very little tax to the UK exchequer. His company ArcelorMittal is headquartered in Luxembourg, while he and his family retain their Indian nationalities and claim non-domicile status in the UK. By donating such a large sum to a London landmark, say some, he is only trying to appease the country he has chosen to live in.

“We set out to create a transformational piece of art that will be an iconic symbol for the Olympics as well as a new landmark that will endure long after the Games themselves… London will have a bold, beautiful and magnificent sculpture that also showcases the great versatility of steel,” he adds. ArcelorMittal has become a two-tier sponsor of the 2012 Olympic and Paralympic Games, with a £10 million cash donation and £6 million in underwriting of capital costs that could potentially be recovered from post Games profits.

The mayor of London, Boris Johnson, and the Olympics minister, Tessa Jowell, approved the commission in partnership with Mittal after bringing together a panel from the art and design world. “Long after the Games are over, our aim is to have a stunning spectacle in east London that will be recognised around the world,” says Johnson. “Anish Kapoor’s inspired art work will truly encapsulate the energy and spirit of London during the Games and, as such, will become the perfect iconic cultural legacy,” he adds.

After completion, the Olympic Park Legacy Company will take ownership of the structure and run the visitor attraction. When the Games are over, the area will be integrated into what will become the largest urban park designed in Europe in more than 150 years. And the Orbit will be its central attraction.

“Alongside the Olympic Stadium and Aquatics Centre, Anish Kapoor’s brilliant design will be like honey to bees for the millions of tourists that visit London each year,” expects Tessa Jowell, minister for the Olympics.

Tate director Sir Nicholas Serota, who was also on the advisory panel, calls it one of the most exciting new commissions of our time. “The collaboration between Anish Kapoor, Cecil Balmond and Lakshmi Mittal bridges art, architecture, engineering and business, to produce a new landmark for London,” says Serota.