As rapid developments reshape the world economy and India’s neighbourhood, the PM rushes to rebalance relationships 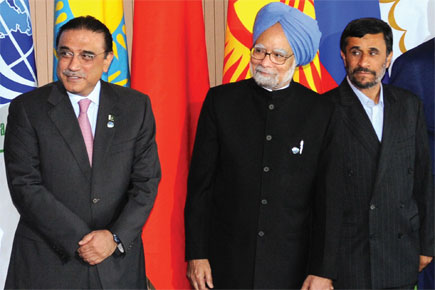 As rapid developments reshape the world economy and India’s neighbourhood, the PM rushes to rebalance relationships


WASHINGTON DC ~ Hedging your bets is an old Indian tradition, chiselled and honed to perfection over centuries. Keep all doors open, dole out criticism and largesse in equal measure, and hope that everyone will be equally satisfied or dissatisfied in turn.

On India’s foreign policy, Prime Minister Manmohan Singh has struck out in a different direction to reconnect with countries he neglected or angered in his first term. The broad aim is to prepare for a world headed for a deeper economic crisis and a neighbourhood about to turn even more dangerous. India needs to insulate itself, secure energy supplies, gear up for the fallout of the departure of US troops from Afghanistan (whenever that happens), fend off Pakistani-design terrorism, and counter China’s multiple provocations. Yes, all this must be done, regardless of the disorder that prevails at home.

If Singh in his UPA-I avatar was perceived as too pro-American, celebrating the special new friendship with a civilian nuclear deal, his second coming is about creating more options while consolidating the strategic partnership with the United States. This would be in line with the political grammar of today’s infuriatingly complex world, which is no longer an ‘either-or’ choice, but a matrix of ‘and-also’. This means recovering the costs of having leant just one way.

The PM’s decision to meet Iranian President Mahmoud Ahmadinejad on the sidelines of the United Nations General Assembly in New York in late September was part of the recovery process. He agreed in principle to visit Iran, for nothing else would mollify the tough Iranians who want to extract a price for each of the three votes India cast against them and their nuclear programme to secure the Indo-US Nuclear Deal.

India is pushing the reset button to pump new life and hopefully more gas and oil into this “civilisational relationship” between age-old neighbours (until Partition). Prime Minister Manmohan Singh, Lok Sabha Speaker Meira Kumar, and other members of a large Indian delegation will be flying to Tehran in the coming months to wipe out the past five years from Iranian memory.

Experience has shown that Iran can be a tricky partner, prone to cancelling or ‘reopening’ previously signed contracts, as it did in 2005 after India voted against it at the International Atomic Energy Agency. The vote cost India a cool $5 billion in a liquefied natural gas agreement. With hydrocarbon prices continually climbing, India needs to ensure its stakes in Iran’s giant South Pars and Farsi gas blocks remain insulated from arbitrary political decisions.

To meet and greet a man India’s new best friends—Americans and Israelis—see as evil incarnate was provocative, no doubt, but there was much more. Under all those layers of oil and gas discussed (Iran is India’s second largest supplier of crude oil at 18 million tonnes annually), there were deliberations about the future of Afghanistan. Iran is a significant player in the region, no matter how distasteful to Washington, and crafting peace in these badlands requires its cooperation. Iran hosted an ‘Islamic Awakening Conference’ in mid-September attended by a Taliban delegation and about 700 religious leaders from around the world.

India can be a credible interlocutor for Iran, and by extension for the United States in its desperate search for a viable exit strategy from Afghanistan. India, Iran and Russia share roughly the same fears about Afghanistan’s future being overwhelmed by Taliban Inc. All three countries participated in a conference in Norway last week to discuss possible formulas for reconciliation. Time is short and the ground situation grave, as Pakistan-supported factions kill for political space.

India is clearly worried by how its larger neighbourhood is shaping up, and Defence Minister AK Antony’s statement that after the US leaves Afghanistan, “a resurgent Taliban will be the biggest security challenge for India” has only telegraphed New Delhi’s acute anxiety. This was one American military intervention that New Delhi favoured, even though Manmohan Singh harshly criticised Western military actions in Libya and the clamour for something similar against Syria in his UN speech. “Societies cannot be reordered from outside through military force,” he lectured. Yet, it is no secret that India would like nothing better than a neat reordering of Afghan society, where the Taliban factions are contained, the ethnic Hazaras, Uzbeks and Tajiks have a prominent role, and India can safely continue to build bonds and buildings.

But the recent blood-soaked messages from the Taliban and Haqqani Network are pointedly dark and unabashedly bold. The assassination on 20 September of Barahuddin Rabbani, a former president and head of Afghanistan’s High Peace Council, and the attack on the US Embassy in Kabul, are huge setbacks for those looking for a ‘good Taliban’ to embrace. Washington DC’s confusion is apparent as it alternately condemns and cajoles its ally-cum-enemy, Pakistan. Admiral Mike Mullen, America’s outgoing chairman of the Joint Chiefs of Staff, called the Haqqani Network “a veritable arm” of Pakistan’s Inter-Services Intelligence (ISI) in a Senate testimony earlier this month, implicating both in the embassy attack. The statement, which set off a firestorm of anger in Pakistan, was quickly softened by unnamed US officials.

But the strong US message has since been repeated by both President Barack Obama and Secretary of State Hillary Clinton. The latter colourfully described Pakistan’s belief that the “wild animal in the backyard” will only go after its neighbour as a fantasy. The problem, however, is that Team Obama has few levers to turn while Pakistani generals wait it out until 2014, America’s scheduled year by which it expects to have withdrawn most of its forces from Afghanistan. As Americans turn more explicit in voicing their ‘real’ feelings about Pakistan’s dangerous games, Rawalpindi’s generals have been leaving fingerprints and voicemails around the place with impunity. They are gambling that in the time they have before 2014, they can bargain hard with the US on leaving Afghanistan to them. The generals know they are really not answerable to anyone in Pakistan, while Obama is under tremendous political pressure at home.

The wild card in the game could be China. Pakistan’s top crust has been doing the Beijing run with greater frequency of late, as relations with the US have steadily declined. There are reliable indications that Pakistani leaders have been urging Afghan leaders to ditch Washington DC, not allow any US military bases on Afghan soil after its troops depart, and embrace China as a benefactor instead. China so far has shown little enthusiasm for extending its protective umbrella. It is content to use Pakistan for its own strategic ends and no further. But given the furious pace of developments, India has no choice but to respond with alacrity. It must prepare for all combinations and permutations that could arise, something the UPA-II Government in New Delhi is trying, if haltingly.