Peace in Nepal, or merely the absence of war, continues at the pleasure of the Maoists. For how long will this carry on? 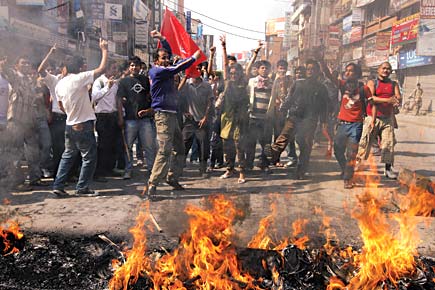 Peace in Nepal, or merely the absence of war, continues at the pleasure of the Maoists. For how long will this carry on?


THREE YEARS ago in the summer of 2006, it was clear there could be no lasting peace in Nepal without a stake for Maoist rebels in that ruined country’s future.

The realisation led quickly to the end of a crippling, decade-long insurgency; and the end of a corrupt, callous monarchy last represented by King Gyanendra. A multiparty interim government was formed with Maoist support. And, landmark elections last April to a Constituent Assembly saw former Maoist rebel Prachanda, or ‘Fierce One’, morph into “The Rt Hon’ble Prime Minister Mr Pushpa Kamal Dahal ‘Prachanda’,” as official communications proclaimed.

Three years later this past week, as Nepal reached another political tipping point with the resignation of Dahal, it seemed to confirm what many cynics have held as true, that the Maoists were inimical to peace. The truth is, the Maoists haven’t made the transition from extreme resistance to a democratic system they—ironically—boosted.

There are other issues too in this laboratory of conflict resolution. It’s perhaps too soon to forget who killed whom during the insurgency and its immediate aftermath that snuffed out nearly 14,000 lives, combatant and innocent alike. Or, to forget the estimated 1,200 who were ‘disappeared’ mainly by security forces, to use a chilling recent verb in Nepal. Or, too soon for past enemies, the army and Maoists, to break bread and integrate by political fiat.

Dahal, pressured by Maoist hardliners, quit over a public spat in which his council of ministers fired Army chief General Rookmangud Katawal, only to have the order rescinded by President Ram Baran Yadav. General Katawal has faced Maoist ire since his appointment as chief in September 2006, often over their insistence on integrating former rebels into the Army. (Rumours of an impending coup blessed by India to ‘stabilise’ Nepal have been fiercely denied by the Army.)

For Dahal, the humiliation followed another: the withdrawal of support to his government by the moderate Communist Party of Nepal (Unified Marxist-Leninist), over General Katawal. This left Dahal’s party, Unified Communist Party of Nepal (Maoist), short of a majority in the Assembly, and in a scramble for new allies among old foes to gather 301 members needed for government formation.

Disturbingly, Maoists have threatened to take to the streets. The Young Communist League, a combination of America’s Moral Majority and Hitler’s Brown Shirts, are readying for a fracas. And there is always the implied suggestion that the Maoists could again take to arms. This has cachet: there are few who believe that the several container loads of both superannuated and usable weapons in storage at several holding camps of former People’s Liberation Army combatants—about 19,000—supervised by the UN Mission in Nepal, were all the arms at the disposal of Maoists.

At stake is a new constitution, in many ways the guarantor of Nepal’s modern reincarnation, to be drafted and promulgated by 2010. There is truth in the direct interest of India—by far, Nepal’s largest trading partner—in that country, or its attempts there to checkmate China’s geopolitical intentions. But Nepal is on edge because of internal dynamics.

Nepal is little more than NGO Nation, neglected and corrupted by royalty for 240 years, and later, a miserable string of political leaders. If expatriate workers didn’t send home $4 billion a year in remittances—nearly a third of the economy—and grants and aid from foreign countries and NGO donors didn’t account for about two-thirds of the expenditure in Nepal’s budget, the country would implode.

“The war hasn’t ended,” Maoist deputy Baburam Bhattarai told me in the days before he became finance minister in the Maoist-led government. “But the form of war has changed.” He made it quite clear that democracy, like guerilla warfare, was for Maoists only a means to power.

Well, they have it. Peace in Nepal, or merely the absence of war, continues at their pleasure.