A Pittsburgh restaurant that stretches the limits of American palatability. It serves food from a country at conflict with the US, peppered with a hearty sprinkling of discussion. 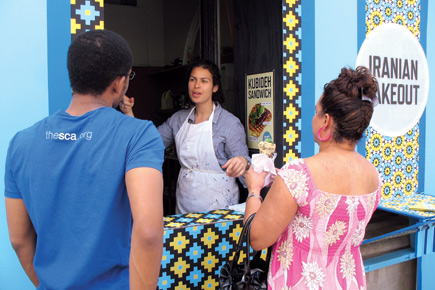 A Pittsburg restaurant that stretches the limits of American palatability. It serves food from a country at conflict with the US, peppered with a hearty sprinkling of discussion.


Illah R Nourbaksh is part of a small but vibrant Iranian community in Pittsburgh, Pennsylvania. He is a scientist. An associate professor of robotics and head of the Robotics Masters Program at the Carnegie Mellon University, to be precise. Six years ago, he took a break from the university, and led the Robotics Group at Nasa—an unlikely place for an Iranian to be nowadays.

Sohrab M Kashani is an artist based in Tehran. He was born more than a decade after Nourbaksh left Iran for the US in 1976 to study at Stanford University to become a scientist. Though born in the same city, it was unlikely that the two would ever have met or collaborated. One is an American scientist and teacher, the other an Iranian artist and curator.

But Iran’s conflict with the US has brought the two together—albeit virtually—at Conflict Kitchen, a takeout restaurant at Pittsburgh run by three artists: Jon Rubin, Jon Pena and Dawn Weleski. It is not just a restaurant, but ‘an experimental public art work’, according to Jon Rubin, assistant professor of art at Carnegie Mellon, and the man who came up with the idea of Conflict Kitchen with fellow artists Weleski and Pena.

The idea is simple. The restaurant serves cuisines of countries that the US is in conflict with. Since it began more than a month ago, the bright blue-and-yellow façade of the restaurant has sported the name ‘Kubideh Kitchen’ in Persian, drawing curious glances from passersby. Some stop at the restaurant’s window to buy Kubideh sandwiches—spiced pounded beef kebabs rolled in barbari bread. Some of the customers who buy these sandwiches also stop to discuss food, politics or both. When that happens, the idea succeeds. ‘Over the past month-and-a-half, the takeout food and ephemera has engaged hungry Pittsburghers with countries that seem both geographically and psychologically distant, and stimulated conversation across cultures on a personal level,’ Weleski tells Open in an email interview.

‘Often,’ she writes, ‘people who come to the window who have heard of the project immediately introduce themselves by identifying their place of birth or where they’re from. Often, this has sparked conversations between Iranians and non-Iranians from all over the world who happen to be living in or passing through Pittsburgh—about, initially, Persian cuisine, and then, the various cultural and political issues surrounding food.’ Weleski is an assistant director at The Waffle Shop, with which Conflict Kitchen shares retail space.

The Waffle Shop is actually part of the Storefront class taught by Rubin, who, with support from the School of Art, rents out empty spaces in Pittsburgh. The art students are then charged with creating a public forum that engages the wider community and context of the retail space. As a communication exercise, The Waffle Shop broadcasts a live-streaming talk show with its customers, a show that acts as a documentary of the area and the people who pass through.

Weleski’s current project includes examining the role of art as a mediator in social conflict. And conflict there is plenty of between the US and Iran. As Professor Nourbaksh notes, the perception of Iran among Americans he encounters in his daily life, ‘is truly mixed’.  ‘But,’ he adds, in an email interview, ‘in almost all cases, people in the US know very, very little about Iran. In contrast, when I visit Europe, many I speak with have been to Iran, sightseeing, hiking, eating, and such[like]. But here, mostly everyone you meet has never, ever been to Iran and often even to that part of the world.’

So, when Rubin and his fellow artists came up with the idea of Conflict Kitchen, he says, he was only too glad to help. His kitchen at home became the trial platter from which to pick Persian dishes to serve at the restaurant. Finally, the group agreed on the Kubideh sandwich. The idea is to keep it simple and get people talking.

‘Food is a pathway to positive feelings and a humanization of other cultures. I believe eating and sharing new cuisine is a catalyst for the sort of conversations that can lead to deeper understanding and cross-cultural empathy,’ says the Carnegie Mellon scientist who often takes time out with his family now to pick up meat for Kubideh sandwiches at Town’s Edge Farm, run by the Snyders, in Ligonier Pennsylvania. ‘And,’ he adds, ‘we have been picking up fresh milled flour for the bread at St Vincent’s Gristmill, a hundred year-old stone gristmill that grows its own soft red wheat in Latrobe, Pennsylvania.’

Open the sandwich wrapper, and you get a large, colourful handout that has snippets on such buzzy things as poetry, fashion and nuclear power in Iran. There are messages aplenty written by Iranians in first person. ‘Most Americans who I have encountered think that Iranians are ugly, aggressive, violent, terrorists, Islamists, and uncivilized,’ rues one.

‘Iranians like Americans, but they hate the American government. So far, what I have experienced suggests that Americans like Iranians, too, but they dislike the Islamic Republic establishment,’ goes another.

On 5 June, at 10 am in Tehran and 6 pm in Pittsburgh, Conflict Kitchen did something special to address the two countries’ mutual mistrust. It sandwiched food with dialogue. The restaurant conducted a Skype meal: groups of people on each side sat down together, hooked up on a web-chat platform, watched each other on large screens, and conducted a relaxed chat over their trans-continental munching session.

‘It lasted almost four hours,’ says Sohrab Kashani, who arranged things on the Tehran side, via web-chat, ‘People changed seats all the time, and new people joined in to have a conversation. We had such great responses from people on both sides. Everyone here was surprised to see tables from the two countries joining one another. I could see people staring at the projected image on the wall and wondering if that was in fact live footage of a table setting in Pittsburgh! Those who already participated in our previous event last year weren’t that surprised to see the technological-breach, but instead curious about the table settings and all the food lying around.’

For spontaneity, Sohrab didn’t tell anyone in Tehran about the project until the very last moment when they were faced with the tableset installation. ‘That is why conversation topics developed very organically and without any help whatsoever. Topics ranged from food, lifestyle and culture to dating, youth and the way of living,’ he says, quite clearly excited about what has been achieved. ‘I do consider it a success,’ he says, ‘The intention was to open up a dialogue between the two sides of the table, and it did happen very organically in my opinion.’

On the other side, in Pittsburgh, Weleski too is elated. ‘During the Skype meal, we had the pleasure of sharing a huge Persian feast with 40 Pittsburghers and 40 Tehranians. All of the Iranians joining us for the meal from Tehran were under the age of 30—over 70 per cent of the population in Iran is under 30—and they enjoyed discussion throughout the meal with other young Pittsburghers, concerning dating, rock concerts, and finding a job after university,’ she says.

What’s more, she adds, ‘I was touched to see, even through the awkward virtual connection, that these people from different countries were not only sharing their everyday lives with each other, but often finding commonalities in their passions and empathizing about life’s difficulties as each was entering mature adulthood.’

Next on Conflict Kitchen’s menu is Afghanistan, ‘perhaps followed by Venezuela’, beams Weleski.