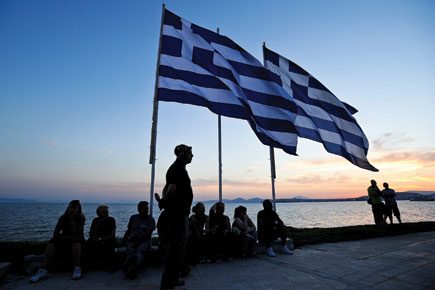 Last night, the conservative, pro-bailout and pro-austerity New Democracy party won the elections, but not decisively enough to have an outright majority. To be able to form a government, they will need to form a coalition with one of their opponents. The second vote-getter, and close second in the elections, was the upstart, radical left party Syriza. It’s leader, Alexis Tsipras, has ruled out any coalition with any pro-bailout party, and so a coalition will likely be formed with PASOK, and one of the other, smaller, leftist parties.

While the election of New Democracy averts the immediate crisis of Greece leaving the euro, it in no way changes the long-term picture. The requirements of Europe’s bailout haven’t been fully implemented, and some of the most severe cuts are yet to come. These will be very difficult to get passed into law, and if they are passed, will likely cause a violent reaction on the streets in the coming months. But the larger picture is more disturbing. Even if the cuts are implements, Greece will still ultimately be unable to live up to its commitments. It will not be able to pay back its debts in full, even at the current levels where much have been forgiven, and it will not be able to grow its economy effectively under the burden of such severe austerity measures.

The reaction of international markets to the Greek election struck me as quite rational. An initial sense of optimism because the immediate crisis was averted, followed by a pullback and a dose of reality, because even with the election of the conservatives, there is no obvious way forward for Greece within the euro. We’ll be exactly here again a year or so from now, if not sooner, and between now and that time, Greece will continue to suffer. The only chance that a deeper crisis can be averted is if Germany and the rest of Europe acts proactively with real stimulus measures designed to actually grow Greece (and Europe’s) economy. I’m not holding my breath.

ATHENS ~ The highway from the airport is eerily empty. It’s mid-afternoon in the middle of the week, and there are fewer cars than on highways in a California desert at the quietest daylight hour. Another unsettling sight are the billboards. From the airport to the city, except one, all are blank. Some of them drip with papery fragments of old ads. It looks like a set for a zombie movie where everyone has died except me. Office parks and foreign factories line the highway’s edge, but most appear closed. The Ikea parking lot is empty.

This is the landscape of a dying nation. In Athens, every other store is shuttered. The only activity visible around the parliament building is that of the paratroopers guarding it. There’s no sign of lawmakers or bureaucrats. It’s as if someone has posted a sign on parliament doors saying, ‘Gone fishing. When are we coming back? Who knows? Maybe never’.

In a café, I talk to its owners, an energetic young couple. They make their own food, all Cretan specialities, sell local organic beer, and when I tell them I am travelling to Crete, immediately give me the phone number of their parents who live there: “Please call them if you need anything. They will be happy to help you.” The generosity is genuine, and I encounter it again and again as I travel through Greece. When the conversation turns to the current situation, the faces of the young couple darken: “We’re doing everything we can to leave. There’s no future for the young here anymore.”

It is exactly such people—with energy, imagination and drive—who the country will desperately need if it ever wants to thrive again, and it is just such people who are booking their passage on the next boat out.

When Greece adopted the euro in 2001, prices rose sharply overnight. Much of this inflation was the result of unscrupulous businesses taking advantage of confusion over conversion rates. The price rise has continued, and a meal that would have cost €1 ten years ago now costs €10. Initially, Greeks shrugged off the spike in their cost of living. Money was pouring into the country, credit was cheap, and so everyone’s boat was rising with the tide.

Then, in 2008, the world financial crisis hit, and began shining an unflattering light on individual countries’ debt obligations. In Greece, the situation was particularly stark. Much of the debt had been hidden by years of corrupt bookkeeping. The country also suffered at the hands of international speculators. During the boom years, hedge funds had sold the country risky and complex derivatives, which, in theory, could have eased the debt load. With bad times, however, they have caused the debt burden to rocket unsustainably.

Europe’s answer has been to demand ever increasing levels of financial austerity. Greek pensions have been slashed, and slashed again, the wages of state workers reduced to a pittance, the country’s education and healthcare systems decimated, taxes sharply raised, and so on, and still, the worst cuts are yet to be implemented.

The theory behind the cuts is that if the country shows it’s serious about returning to financial health, it will attract significant foreign investment. Of course, the theories of bureaucrats in Brussels and Berlin have been just that, and the vast social experiment currently going on in this country has resulted in a slow-

moving catastrophe. The economy has shrunk dramatically, unemployment has shot to 22 per cent, and the once famous nightlife of Athens has been reduced to a few lively tables amid seas of abandoned chairs. Foreign investment, rather than increasing, has vanished.

I sit at dinner with an artist and her husband, a philosopher and translator, Eliza and Spiros. As soon as we sit down, the owner walks over and warns us to hide our bags. They could be snatched in an instant, he says. Later, when I place a book on the table, he tells me to remove it. Two years ago, he says, he would never have thought twice about crime, but now it happens all the time.

In his own way, he’s trying to change that. He’s started a web series of interviews with artists and thinkers who are doing positive projects that have nothing to do with the crisis.“It’s one attempt,” he says, “of trying to get people to think about something else.”

Eliza, though born in Greece, is an American citizen. The couple have two young children, and they’re thinking seriously about leaving. “The Greeks did this to themselves,” the husband says, “Half the country are bureaucrats. The red tape to do anything is endless, the corruption everywhere. It’s almost impossible to start a business.”

On 6 May, Greece held legislative elections that resulted in no government being formed and—at this crucial moment—in legislative paralysis. One other result was the shocking rise of the neo-Nazi party Golden Dawn, which won seats in parliament for the first time. Virulently anti-immigrant, one of its election slogans is ‘Let’s rid this country of the stench’, referring to foreigners.

On 17 June, a second election will be held, widely regarded as a referendum on whether Greece should stay in the eurozone or leave. Staying will require submission to years more of devastating austerity programmes. Leaving will result in a return to the drachma and an almost immediate wiping out of property values and the savings of every Greek who still has money in the country.

In the worst case scenario, Greece would become a third-world nation overnight and collapse into anarchy and take much of the world with it. Such an impact would be strongly felt in India. In the best case, Greece would suffer alone for a few crushing years but the devalued currency would eventually make it a magnet for corporations looking for cheap labour and inexpensive exports.

The Greek writer Lisa Samlogou takes me on a tour of Athens at night, and when we confront a dark alley, she turns away. Earlier, she says, she would never have been afraid, but now people are being robbed all the time. No one carries important documents with them, no one carries more than a little cash.

She has been following the attacks on immigrants and the rise of fascists. It was unthinkable a year ago. “After the elections,” Lisa says, “people aren’t talking to each other. You don’t know who anyone is anymore. Everyone’s suspicious. Did they vote for fascists?”

Last year, she started learning Spanish and travelled to New York. She likes New York. People there have something to look forward to.

Ranbir Sidhu is a New York-based writer and playwright. His first book of stories, Indian Girls Are Good, will be published by HarperCollins India/Fourth Estate this summer. He is currently living in Greece, where he is working on a novel

This article is an updated version of the print story