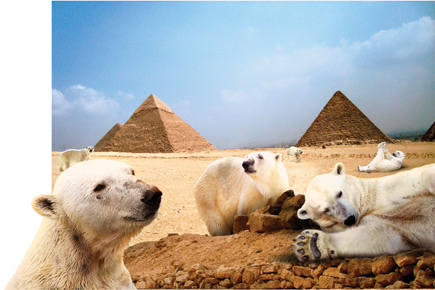 
“Gawd blimey, surely it can’t be more crowded than your Manhattan?!” That was the British Prime Minister before he was temporarily silenced by the US President’s loud guffaws, rather inappropriate given the occasion. But one really could not fault either for the surprises the morning held for the world’s heads of state.

The look has changed. The alleys are no more a series of stinking mud puddles flanked by overflowing drains. But standing at the door, one can still shake hands with a neighbour across the lane. The rows of shanties that used to tiredly droop forward, as if to rest their heads against the adjacent columns of tin sheets, have been torn down. But even the pale grey, cellular structures built by the Government cannot contain life within. The narrow passageways still double up as private courtyards, leaving just enough room for nonchalant pedestrians and scurrying motorbikes manoeuvred by born again rope-walkers.

The look and conditions of India’s biggest slum have changed. But Dharavi remains the world’s most densely populated place. If anything, it has become 15 per cent more crowded over the last decade. With a population of 1,050,000 squashed into about 550 acres, today Dharavi houses a staggering 472,330 people per sq km.

It was deja vu for many who had attended the first Population Summit two years ago at Abuja in Nigeria, the country projected to become the world’s fourth most populous by 2040, and had travelled across the continent to survey the slums of Kibera in the Kenyan capital of Nairobi. As the world population threatens to touch the 8 billion mark next year, the world’s tightest sardine-houses offer scary signs indeed of things to come.

Even from far above, there is no mistaking the ‘hell hole’. World leaders, gathered here to discuss the future of the planet at the second Global Population Meet, conducted an aerial survey of this ‘partially rehabilitated urban slum’ today and returned very worried.

Sightseeing over, it is time for backroom negotiations before the evening’s gala New Year bash (fittingly termed the Countdown Night). Tomorrow, the world leaders will have a tough day. The fact-sheets handed out by the Intergovernmental Panel for Coordinated Action on Population (IpCap) at the beginning of the summit leave little room for comfort. If the boom continues at the present rate, the world population will hit 10 billion in the next two decades—about 15 per cent more than what can be sustained by an equitable distribution of food and water available on the planet.

Since the idea of equitable distribution is likely to remain just an idea, an even bigger section of the population–an estimated 30 per cent–will go hungry and thirsty, unless governments adopt binding measures to bring down and stabilise population at the 1999 level of 6 billion. No doubt, the key delegates will have their hands full today before the world leaders start negotiating the final round of the summit at the specially designed Counting House on Mumbai’s Marine Drive tomorrow.

Not too long ago, the same Marine Drive, many would remember, hosted the world’s top leaders at the last UN Summit on Climate Change. For over two decades since the 1990s, climate debates generated ample hot air but not enough to melt the layers of ice perpetuated along the North-South divide. Finally, acknowledging the futility of the carbon tax on developing countries, that Mumbai summit reversed years of emission commitments that the then US president memorably described as an exercise in “pointless longsightedness” when more immediate issues were at hand.

With scientists in increasing numbers pointing out the disconnect between human activities and climate change, delegates had symbolically drowned the Mexico Protocol in a watertight capsule in the Arabian Sea and adopted the Juhu Charter. The mandate of Inter-governmental Panel on Climate Change (IPCC) has since been reduced to periodic monitoring of greenhouse gas levels, in view of the revised global commitment to lower and stabilise emissions at 2005 levels by 2025.

The world has since heard little from the IPCC. Seven years after what now seems to have been the final climate summit, the Queen’s Necklace in Mumbai is still afloat. The sea level has not risen very significantly, polar bear and penguin populations have steadily been on the rise, and the last of the climate dollar sources has dried up. Even as global temperatures kept fluctuating as ever, people drove their green cars to airports and nobody actually junked family blankets.

Eventually, nudged by a landmark report brought out in 2014 by a group of 41 scientists under International Population, an independent group funded by the UN, the world decided to move on. The focus shifted to the root of all problems: “There are just too many at the table to deserve a decent slice.”

The IpCap was set up in 2015 to coax countries to commit on binding, time-bound reduction in population growth. At the Abuja summit in 2017, tough population control measures were mooted, with a proposal for population tax and partial subsidy for luxury condoms. But the North-South divide returned to haunt the population debate as well.

The developed world claims that the developing/poor nations are typically more crowded, and the onus should be on them to cut population growth. The target is clearly the Asian, African and Latin American nations, with special emphasis on China, India, Brazil, Indonesia, Nigeria, Pakistan and Bangladesh.

The developing world, particularly the Asian superpowers China and India, argue that ‘population density’ should be determined not merely on the basis of a country’s landmass but on the arable landmass as it defines the resource (read food) availability to support a population. For example, UK may claim a population density of just 260 per sq km as against India’s 383 per sq km, but only 23 per cent of land in UK is arable while almost half of India’s land is fit for agriculture. Not surprisingly, UK’s population density works out to be 1,125/sq km of arable land, much higher than India’s 785/sq km of arable land.

Also, the P-P-P campaign (poverty fuels population fuels poverty) has become iconic since a global tour of the world’s leading performing artistes drove home the point in 2016. But the dilemma has created another front in the population debate. While the poor demand aid to cut population growth through education and awareness, the rich seek a ‘population tax’ from the poor for stretching global resources.

As the debate continues, the heads of state will negotiate tomorrow to finalise some kind of global treaty. To quote an IpCap spokesperson, “A starting point that might foster responsibility and create a stage for more meaningful action in the future.”

So keep your fingers crossed. Expect a joint new-year-declaration by late evening tomorrow. Meanwhile, count yourself lucky if you have a pass to the much awaited premiere of the Al Gore-Michael Moore joint production: A Stupidly Convenient Count. The buzz is that Fanny Armstrong, though in Mumbai, has refused to attend the screening. She will be leading a motley crowd at Nariman Point to remind world leaders of ‘the imminent threat’ of a climate catastrophe. If sources are to be believed, she is here to convince a top Bollywood star for her next documentary, The Age of Amnesia.