A minor football victory over India for news tickers, a major cause of jubilation for Afghans 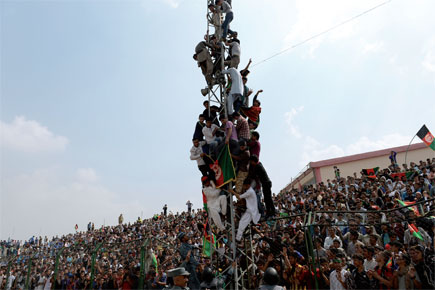 A minor football victory over India for news tickers, a major cause of jubilation for Afghans

When India and Afghanistan reached the tournament’s final, most commentators concluded that India were going to be champions. But most Afghans were upbeat, so much so that a planeload of ministers, MPs and celebrities flew to Kathmandu to cheer the team. The tall Afghans, described by breathless Indian sports reporters as ‘six-foot-giants’, drove one goal in either half of the match to register an emphatic 2-0 victory.

As the match progressed, I was getting updates through social media and personal messages from friends in Kabul. ‘The city is empty,’ they said, ‘Everyone is watching the match on TV or listening to the radio commentary.’ The country’s Moby Group had arranged to broadcast the match live at short notice.

Once the final whistle of the match blew, the euphoria across Afghanistan was unimaginable. I was told that Kabul reverberated with sounds of celebratory gunfire or shaadeeyana as they call it. ‘But it was not fighting, it was gunfire of joy,’ said another friend. That celebratory gunfire went on all through the night. One non-Afghan UN official currently posted in Kabul said, ‘For the four years I’m living here, I haven’t seen anything like this!’

The homecoming of the team was another manic moment. President Karzai and his entire cabinet turned up at the airport to receive the team. A big public felicitation event was organised at Kabul Stadium, which swarmed with thousands of people. Some were lucky to enter; others used every possible high vantage point around the stadium to get a glimpse of their football heroes. One image is particularly noteworthy: a few dozen men hanging off a mobile phone mast at least 30 feet above the ground at the risk of their lives.

During my regular visits to the country, only once have I seen such scenes of jubilation in the last 11 years. The other event was the country’s first open democratic election to pick a president in 2004. We witnessed people coming out in huge numbers, dressed their best. People danced on the streets, as though they were out to celebrate a wedding. It was understandable; it was their first shot at nation-building in which they felt they had a stake. But what explains such a euphoric response to Afghan triumph in a minor tournament like the SAFF Cup?

WHEN I SET foot in the same Kabul stadium for the first time in 2002, I had an eerie feeling. Walking on the grounds, I was trying hard not to visualise the public executions that took place there regularly till recently. The Taliban, in power between 1996 and 2001, had banned all sports activities and used the country’s only stadium as a killing field. They would routinely execute people who ‘strayed’ from their interpretation of Islam; they would put men and women to death for alleged adultery; they would punish their political adversaries with public executions.

Walking in that arena, I cringed at the thought that I was possibly stepping on a spot that might once have been soaked with the blood of innocent victims of the most violently repressive regime of modern Afghanistan. The concrete seating stands were half broken and the main building was so derelict it felt like a haunted house.

Within a year-and-a-half, during one of my visits, I saw that the stadium was getting a facelift. New walls were being erected, it was being painted, and, most significantly, there were kids kicking a football around the field. Since then, we have seen how sports gradually became an important part of Afghan society, even though not much was reported of it or talked about.

In the ‘grand nation building project’ led by the West, we had not seen any strategy paper on making sports an integral aspect of the task. Sports gained ground because people wanted it. They wanted to make a mark in life through it. Since Afghanistan’s ‘nation-builders’ did not have much on offer, they took the initiative themselves.

Anyone who drives around or walks the streets of Kabul will come across signboards of several schools for martial arts and bodybuilding gyms. Kids and young men play football and cricket in public parks all day long.

In the Beijing Olympics of 2008, a young Afghan called Rohullah Nikpai did his countrymen proud by winning a bronze medal in taekwondo—the country’s first ever such medal. Rohullah’s success inspired many young Afghans to take up the sport.

Compared to Rohullah’s accomplishment, winning the SAFF Cup could be seen as a minor feat. The event does not have much stature in the arena of world football, yet Afghans are equally if not even more proud of it. Football is a team game, after all, so it is something of a collective achievement, and that too, over a far larger country.

In recent times, there have been many doomsday predictions for the country as NATO’s troop withdrawal deadline of end-2014 approaches. These scare scenarios range from a return to anarchy to a Taliban takeover. Without getting into a debate over whether these predictions have any merit, one has to admit that Afghans are worried and their worries concern their leaders more than anything else.

If one looks at Afghan history, one cannot but agree that Afghans are their own worst enemy. In their bid for ethnic, tribal or clan dominance, Afghans have a centuries-long record of war and conflict, often ending up defeated by enemies weaker than them.

The Taliban’s assumption of power is one such example. When the last Communist president Dr Najibullah handed over power to factions of the Mujahideen in 1992, the three factions in their true tradition started a four-year long civil war that killed tens of thousands of civilians. They also wasted all the resources and energy at their disposal.

As a result, a relatively new militant group with little influence came to defeat them comprehensively. Infighting along ethnic and tribal lines has always been the Achilles heel threatening Afghanistan’s stability. Since the 2002 overthrow of the Taliban, however, the only strife seen in the country has been on account of the NATO-led fight against that group. Yet, there is no denying the fissures that run underneath the present set up. This explains the search for celebratory moments that have the country come together as one, and this football victory offered exactly one such.

The ongoing celebrations, thus, are best seen as a demonstration of the country’s popular mood: of unity. The entire country, irrespective of ethnic or tribal identity, was glued to TV and radio sets and erupted in jubilation as soon as the final whistle blew.

The homecoming event in Kabul also carries a poignant significance for an old-time watcher of Afghanistan like me. The public frenzy to welcome the football team at the stadium can be interpreted as a loud statement against the insurgents who used the place as an execution ground only 11 years ago. The country and its people have converted this killing field into a football factory. These footballers have now done Afghanistan proud. They have brought Afghans together and given them the self-esteem and sense of national identity this country so badly needs.